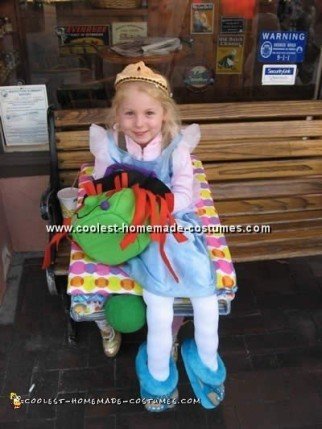 My daughter recently heard the story of the Princess and the Pea and decided that’s what she wanted to be for Halloween. It took many nights of brainstorming this original Halloween costume idea, but this is how I finally did it.

I took 4 mid-weight sheets of cardboard cut out 4 circles large enough for my daughter and then hot glued on batting and fabric to look like mattresses.

On the bottom 2 mattresses I cut a semi-circle out of the front for the “pea” which I made out of a large Styrofoam ball painted green. I whip stitched the mattresses together and then attached the pea by threading it with a wire looping each end of the wire and sewing it on to the mattresses. I sewed a pillow onto the top of the bed to complete it.

A princess crown and dress completed the look. My daughter won 1st prize in our local costume contest and was a hit with the trick-or-treaters. We even had other parents flagging us down to take pictures.