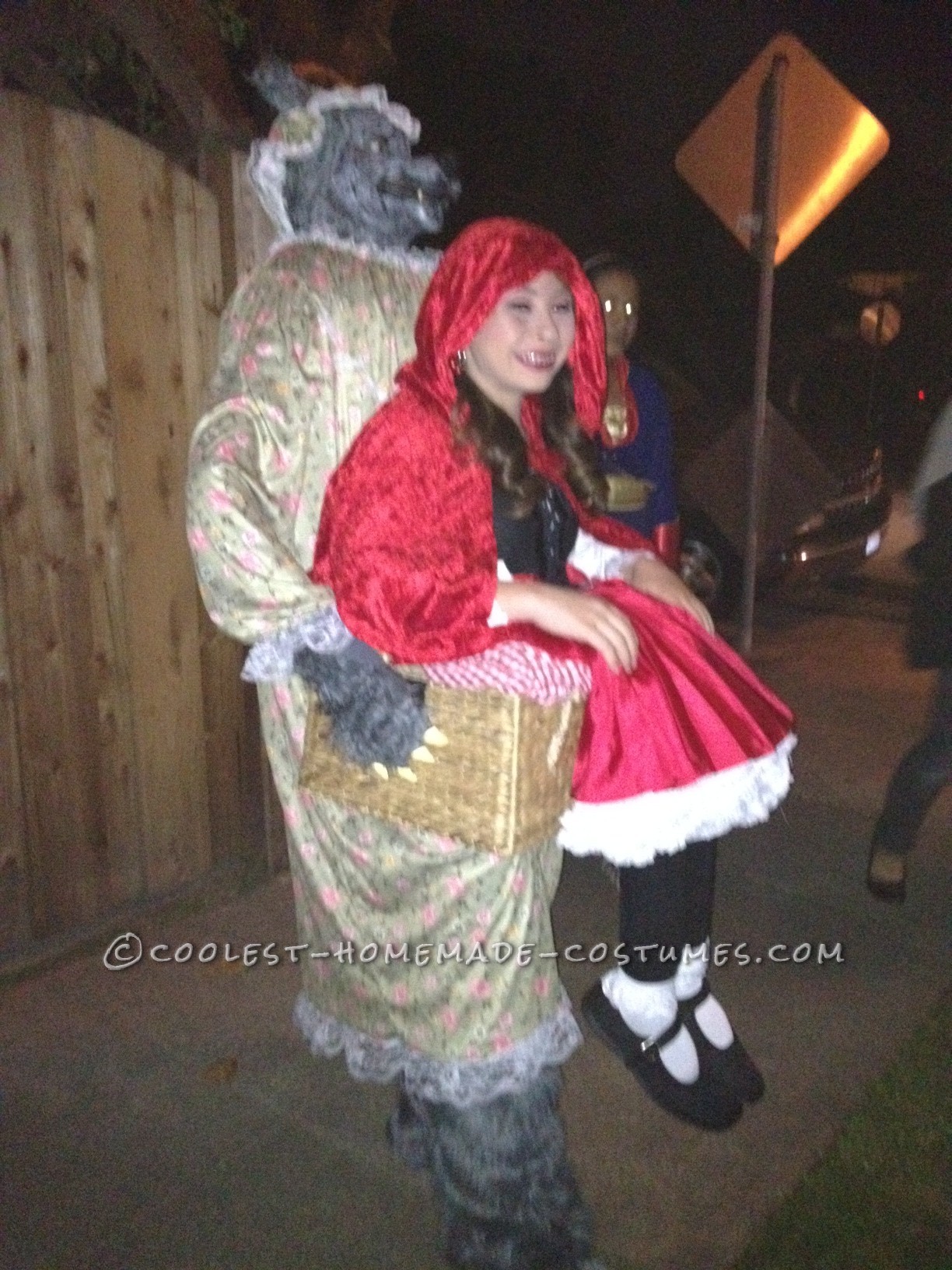 This is my Little red ridinghood and big bad wolf illusion costume.

I made this out of a foam block I had for flower arrangements, a stuft shirt, a long nightgown, a regular backpack and a hiking pack frame. I used 2 cut PVC poles, inserted them into the bottom of the foam block with considerable length protruding I cut my regular back pack from the middle down but made sure to leave the straps intacked, I the zipped up the backpack cut 2 small slits into the top where the zippers were and inserted the poles through that. I then got a hiking frame slipped the cut backpack over the top of the frame then duct taped the PVC poles to the sides of the frame. I did try to use a rolling back pack, but it wasn’t sturdy enough to hold up the basket once attatched, so this was my last minute option, and it worked perfectly, especially since the hiking pack frame had a cushioned waist strap that held the wolfs body close to my daughters body and didn’t shift around or lean back. I then made arms out of nylons and stuffing. I cut a hole into the long nightgown for my daughters upper body to slip through and put that over the foam and stuft shirt.

I bought a wolfs mask, with golves, acrylic eyes, and LED light kit. I used a wire hanger to poke a hole through the styrofoam head, ran the wires through the head until they came out of the eyes, I placed the LED bulbs into the fake eyes, then glued the eyes to the head, I got small peices of stuffing, spray painted them grey spray glued them around the eyes to cover the styrofoam eyesockets,and give it a realistic look.  I then stuft the mask to give it a filled out form, put it over the head then used a rubberband to secure the mask around the neck, I got a wooden thick dowel inserted into a hole at the bottom of the styrofoam head glued it, when it dried I then pushed  that through the foam block where the neck was positioned. 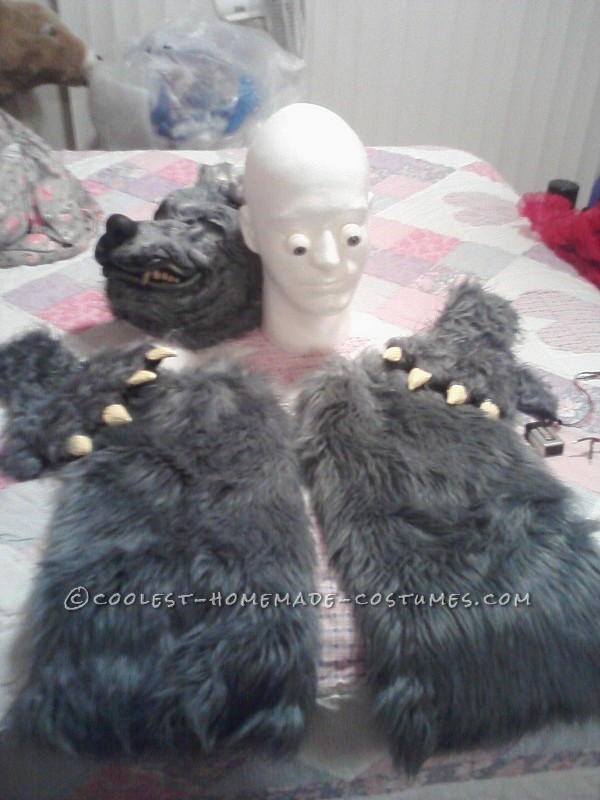 What I started with.. 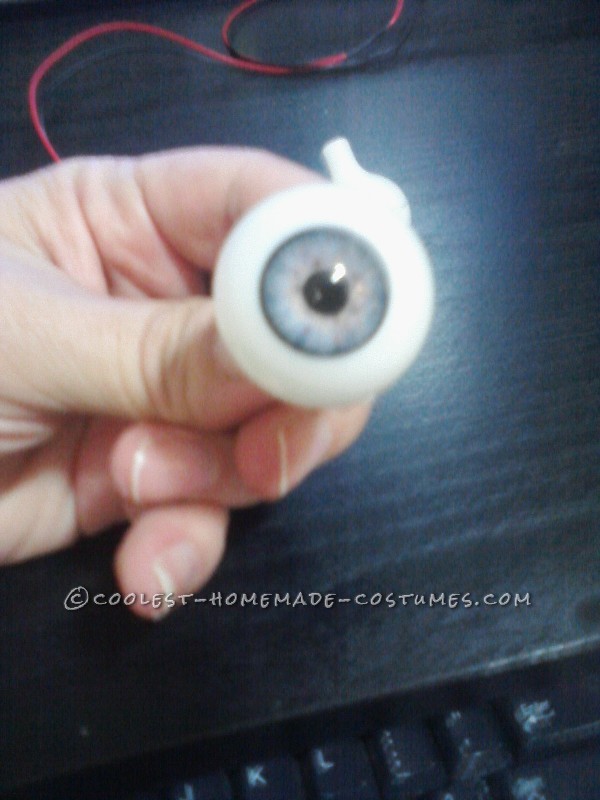 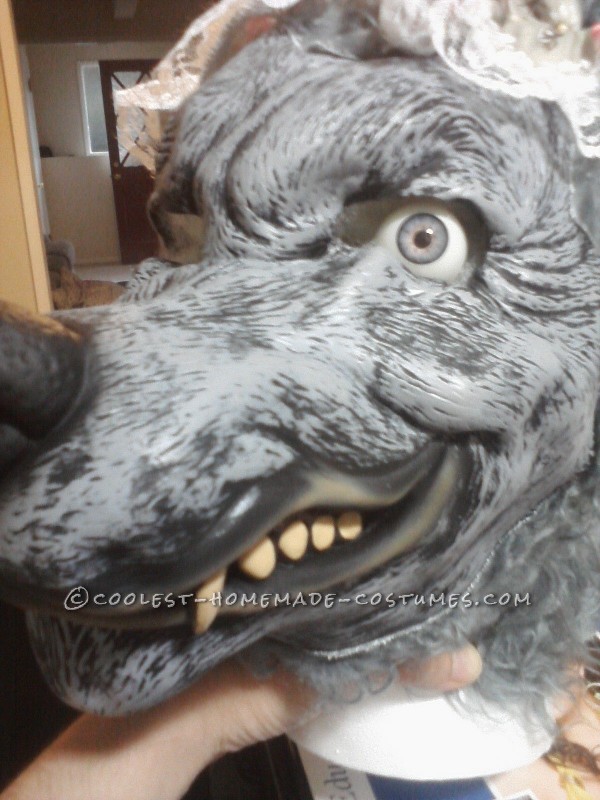 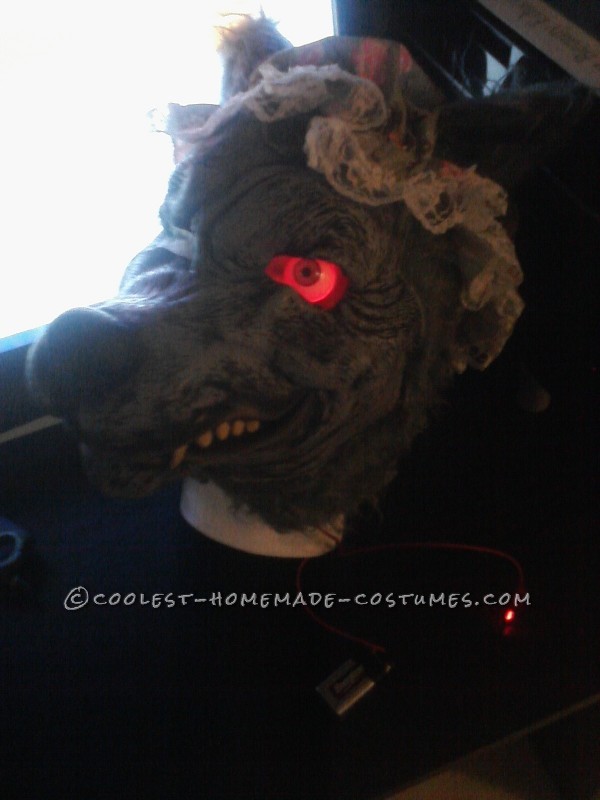 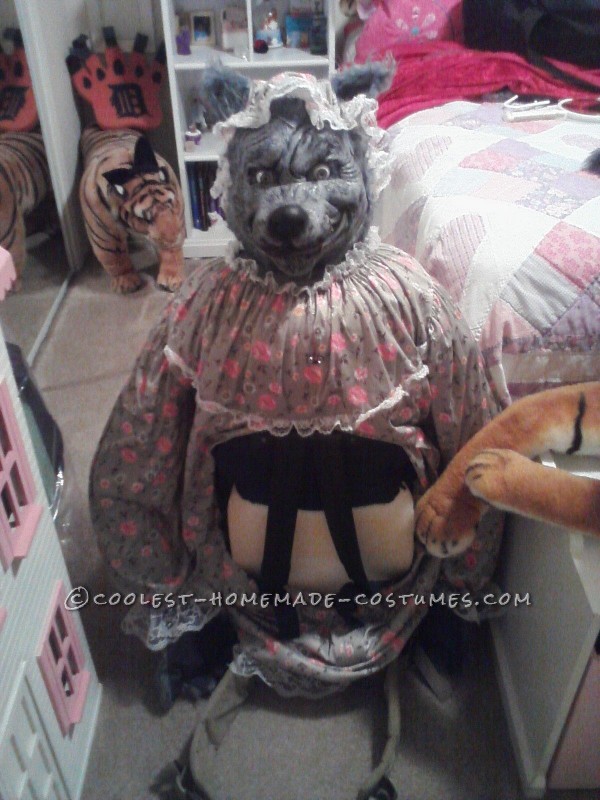 I had an old wicker basket that a cut a square out of the back and bottom, so as to slip around her midsection, I had some velcro straps, cut some slits into the front top of the basket , then looped the straps through the basket handles and slits. Imagine the old ciggare**e girls and the trays they carried. Thats how I fashioned the basket. The straps slipped over her whole upper body and it rested on the back pack straps when she was wearing it , so to not be supported by her neck, but by the backpack. I then got some gingham material ( scrap) and lined the basket with that so you wouldn’t see the straps looping through the basket.

I then used and old pirate dress, cut off the botom skirt, so that I was left with only the top intact, I got a red skirt and a ruffled short petticoat and sewed them both to the front of the shirt like an apron, so that she could wear the shirt and extend it out to cover her fake legs completely.I made her legs out of Polyeurothane material, because I wanted a smooth look and couldn’t achieve that with quilting batting of newspaper. i covered them with black tights, and a pair of ruffled little girl socks and my old shoes. i cut the tights in half and then pushed the tights through the wicker basket and tied a knot in them so the wouldn’t slip through. I had an old red cape, Started in the middle then slit it up to the hood, so that the backpack straps could be put on through the slit and be hidden by the cape. I then bought a pair of grey furry boot covers that went up to her knees and bought a pair of furry slippers that I spray painted grey….All night long people would stop and stare, take pictures of her and with her. She had the best time. Extra candy was also a bonus. This site has given me soo many ideas over the years, that enabled me to accomplish this great costume.You can checkout my costume from last year on this site titled “Headless Vampire Illusion Costume” as well.