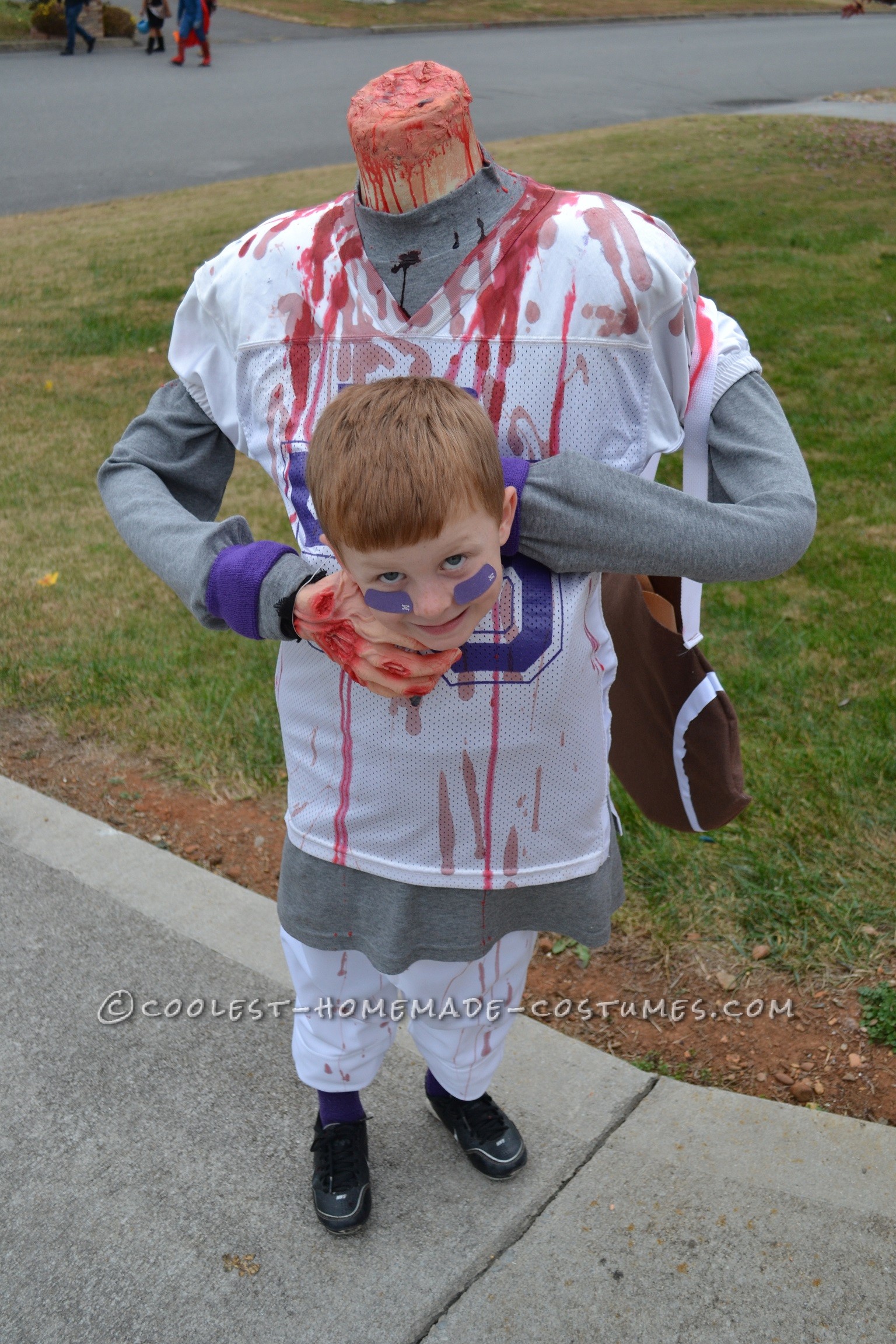 This costume was made relatively easy. We put his picture on Facebook and everyone went crazy over it. People we didn’t even know was sharing the picture. Everything was purchased at a thrift store or items we already had. The total cost was about $25 from items purchased at local thrift stores. Here is a rundown of everything we needed for the costume and were we purchased it from as well as the cost.

Of course you could make this with your own spin. Our child wanted to be a football player and we just amped it up by making him headless. He just happens to play for the same team where we got the jersey so that made it extra special for him

The bust was made of foam and was too tall and wide. It was too wide to fit into the backpack so we trimmed it down on both sides as well as cut off some of the length to look right as we tried it on our son. Since our son is Caucasian, we pained the bust to his skin tone. We just used a bread knife to do so and it came off very easy. 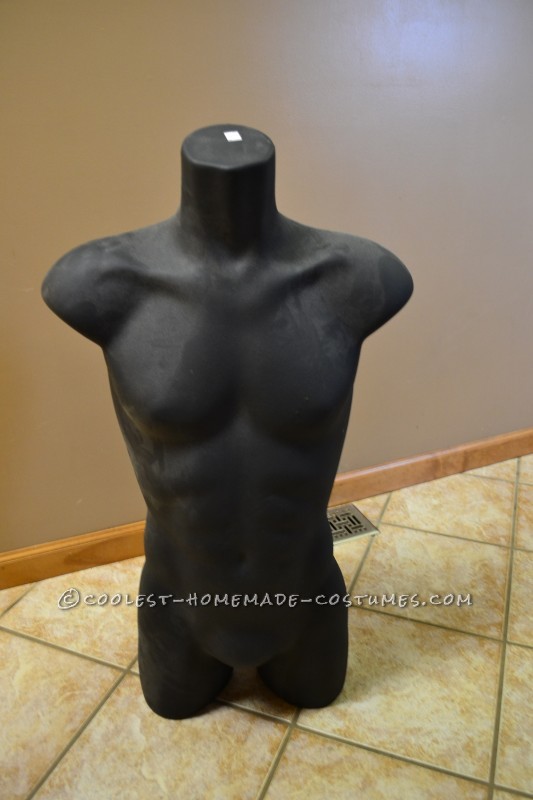 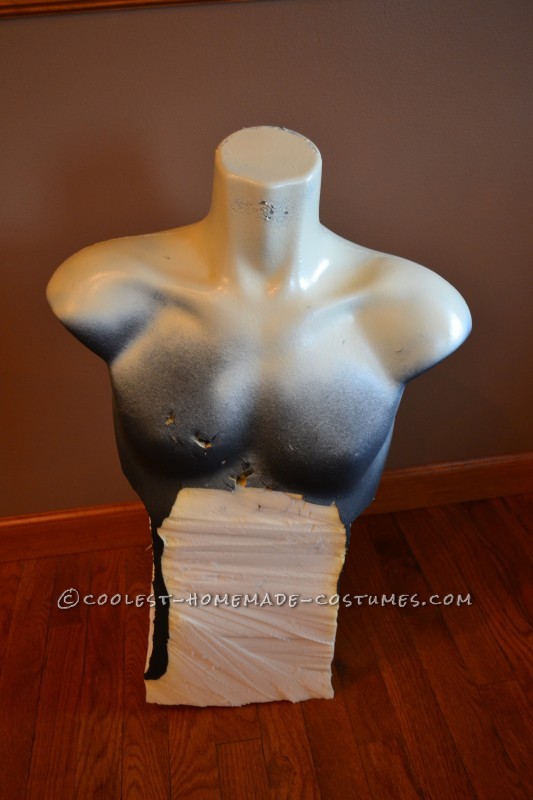 bust after trimmed down and painted

Making the neck look cut off

Wad several pieces of toilet paper on top of the neck and spread Elmer’s Glue on it making the toilet paper completely wet. Design to what you think looks best for the neck to look cut off. Let it dry completely. Usually takes several hours. After it dries, add the fake blood to your liking and let dry. 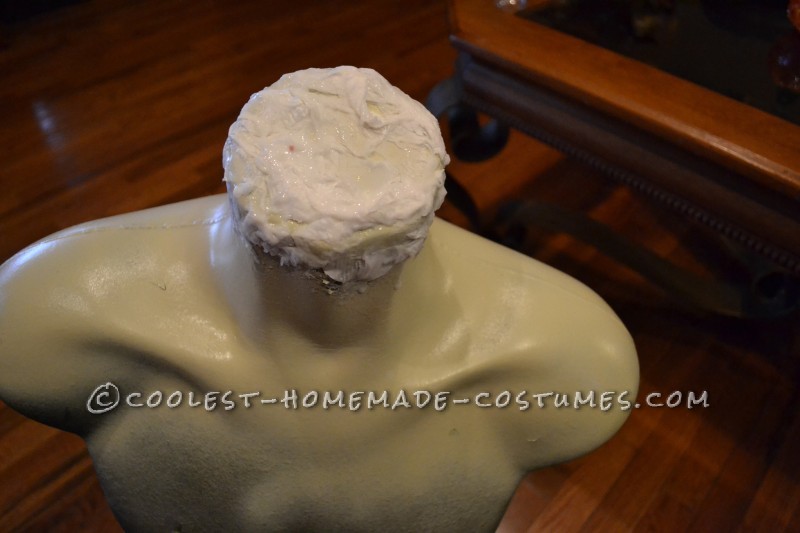 neck with toilet paper and glue 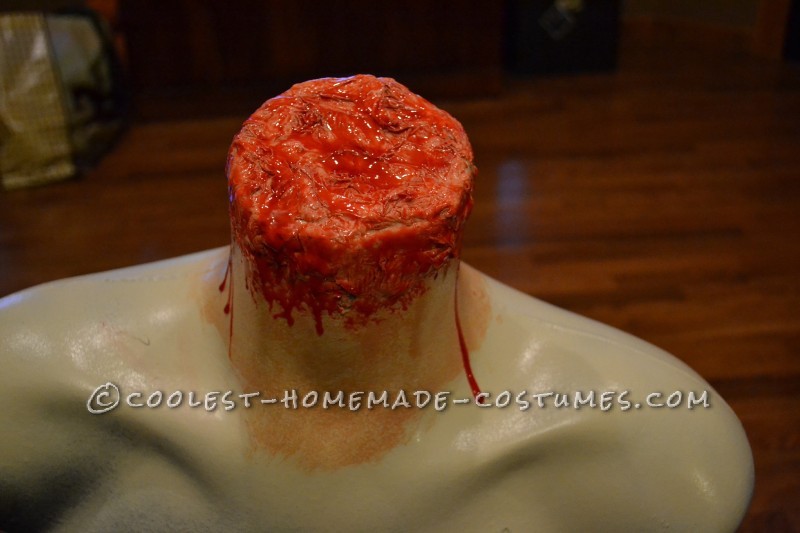 We hung the jersey and the pants outside and let our son spray them with fake blood to his liking. Let them dry. The blood will turn a slightly different color when dry but we added a little fresh just before he went trick or treating. It did completely wash out but it could stain some fabrics. 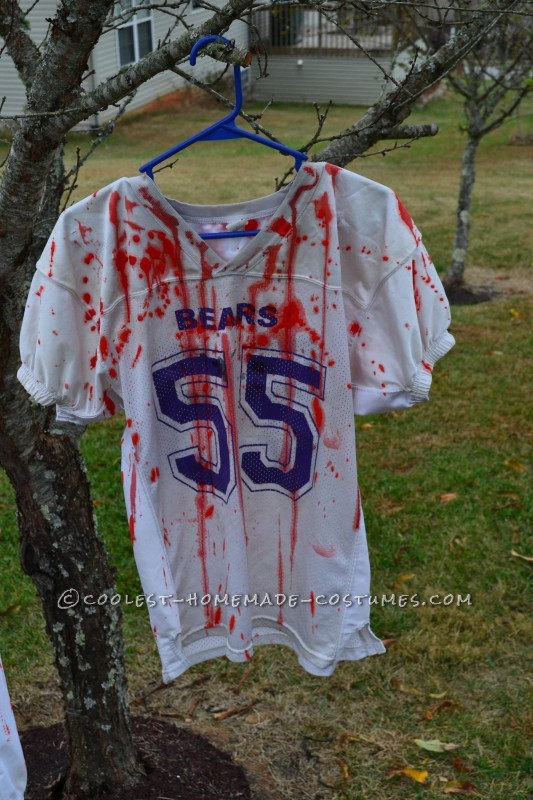 Have fun with the blood! 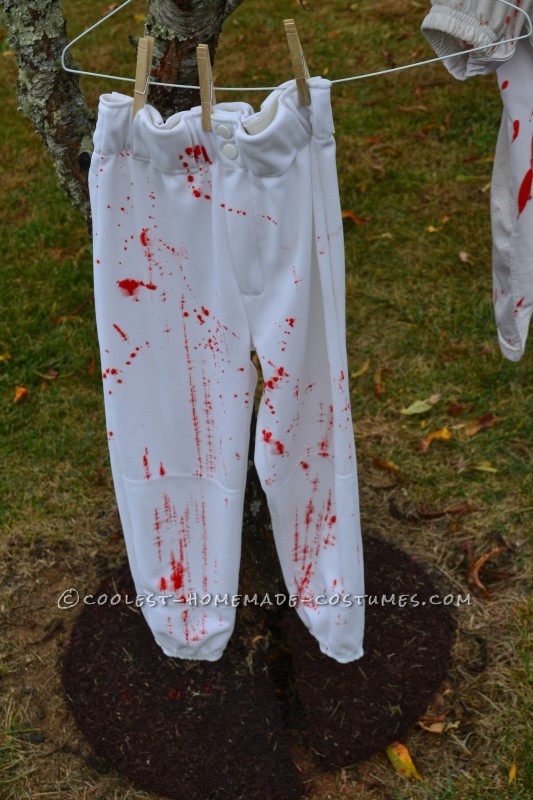 Give your child a chance to get messy.

With this step, I cut the pool noodle the same length as the grey long sleeves. I then cut a v into the noodle where the arm would bend at the elbow. I attached the hand to the pool noodle by taping it together. I put the purple wristbands over the tape to cover it up. I left them hanging until it was time for him to put the costume on. I will cover how to place the arms at the end. 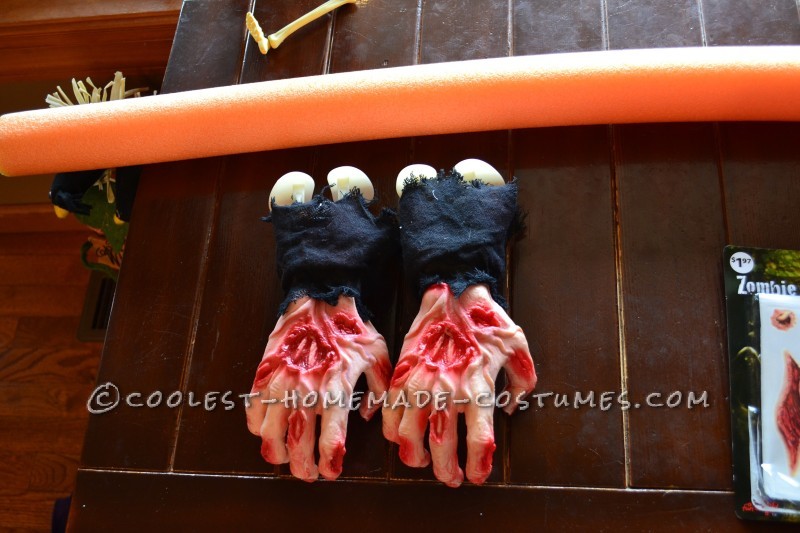 Making the hole for the head

This step requires your child to try on the jersey part of the costume. Have your child to put on the backpack and cinch it as tight as it will go. Place the foam bust down into the back pack as far down as it will go. You may have to tape it secure to the backpack if it is loose. Ours was tight so we did not need to do so. Place both shirts on the bust and have your child put the shirts over their head and pull them down as far as they will go. Cut a hole in both shirts in the where the center of their head is. Make the hole as small as possible so you cannot see the hole once they get their head though. The jersey was tight enough to my son that the bust stayed right next to his body. If it is not tight, you may have to tie something to your child to keep them together or the bust may fall over.

Put it all together! You will have the coolest costume EVER!!!

Ok this is it! Putting it all together. I first had him put on shorts and a white t-shirt. I then had him put on his football socks followed by the football pants. He then put his cleats on. We put the backpack on him and retightened it at tight as it would possible go on him without making him uncomfortable. We then put the bust into the backpack and put it down as far as it would go. We then put the long sleeve shirt on the bust. (It already had the arms in it with the hands)  Put the jersey on top of it and put their head through both shirts in the hole that you created. I put a safety pin on the bottom of the hole where it was drooping a little to make it tight. Have your child put their arms to the side down into their pants. Since they cannot hold a bag for trick or treating. I placed one that my mom made through the fake arm and around the fake shoulder. I then placed the fake arms with one on top and one on bottom of his head and held them together with string. I put his eye black stickers on him and took him out side. I added a small amount of fake blood to the neck and shirt just to get some of the fresh red color. That was it! It turned out soooo cool. I don’t know how we will top it next year! 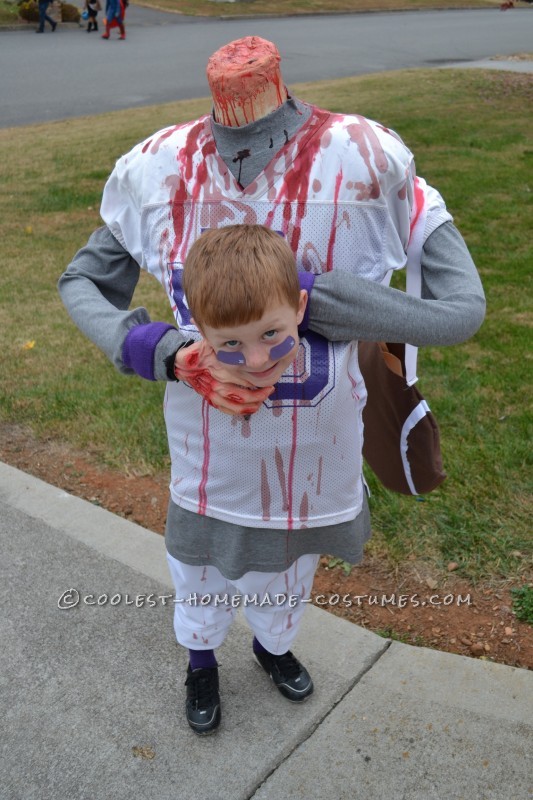 Putting it all together! 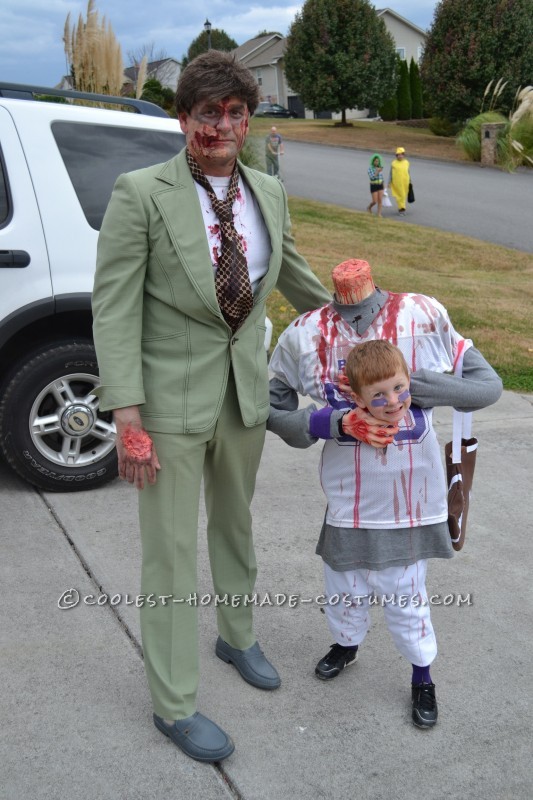 Ryan and his daddy ready to trick or treat!