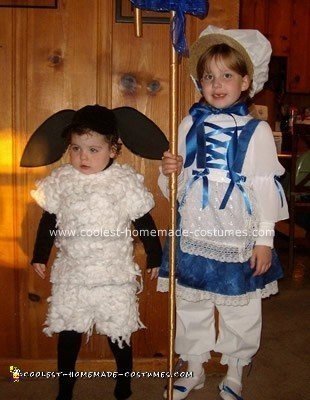 This year my six year old daughter wanted something that her and her sister could do together for Halloween. So after much discussion we came up with Little Bo Peep and her sheep.

For the dress I took a Raggedy Anne doll costume that my older daughter already had and took off all the red trim and piping that was on it and took off anything that resembled Raggedy Anne, then I took blue ribbon and criss-crossed it over the chest to look like a bodice. I than added bows under the straps of the dress and on the sides of the arms. I ordered bloomers on e-bay and added blue ribbons to the sides of the legs, now came the real work, making a bonnet and the shepherd hook.

First, I took an oversized sun visor and some stiff white material. I took a large piece of material and layered it on top of itself and hot glued it to the brim of the visor.(The extra material made the bonnet puffy). I then added a blue ribbon around the brim to cover up from where I hot glued the white fabric onto the visor. Next I added the ties on the bonnet. First I tilted the visor upwards so that it looked like a bonnet then I took wide blue ribbon and hot glued at the bottom of the visor to tie around her neck.

For the first time I was grateful that Christmas was out in October. I bought a hollow candy cane and found a dowel rod that would fit inside it. I then adjusted it to the right height for my daughter and hot glued it into place. Then I wrapped the cane in a brown ribbon from top to bottom and hot glued that in place to give it the appearance of a cane. The final touch was the big bow I made and hot glued it on the cane. (I looked up bow making on the net for the correct way to make a bow)

We had a pair of white shoes already so I just hot glued matching blue bows on her shoes.
We now had Little Bo Peep and she was a hit on her own!

Now we had to do a sheep. Her sister is two years old so this was going to be a challenge.

I bought a pair of gray pants and a gray top, one size too big. I cut off the sleeves above the elbows and the pants above the knees. You could use shorts and short sleeve shirt instead but I couldn’t find summer clothes in Oct. I hot glued the rough edges under. I wanted the “wool” to have a more nappy appearance so I cut the cotton balls in half width wise, then I hot glued the cotton balls on in a row straight across until the top and pants were covered( I had originally tried regular glue but when it dried the cotton balls fell off). The material becomes heavy and stiff so it can not be put on over the head so I cut the back straight up the center and hot glued WIDE strips of Velcro on it to make it go on like a smock. After you get it on Velcro it shut.
I wanted her to be a Suffolk sheep which has black legs and a black head so I dressed her in a black turtle neck and black tights. Then put on the shorts and the top.

The Head and Ears:

For the ears I purchased black felt and black sheets of foam. I traced a large tear drop shape on the black foam and cut it out. I then traced a smaller teardrop on the felt and cut that out. Then I hot glued the felt onto the center of the foam. I then pinched the wide end of the ears together and hot glued it so that the ears curved. I had purchased an adjustable black baseball cap at the store and about ear height I cut two small slits in the hat horizontally and slid the ears in, then hot glued them into place. She then wore black shoes to finish out the outfit.

We had several parties to go to so cotton balls were pulled off on a regular basis but because it was hot glued there was still cotton in the spot. By the time she wore it on Halloween she needed to be sheared because she was real shaggy (which really helped make it more realistic).

All night Little Bo Peep (my eldest) was asked where her sheep was and she responded “behind me” (her little sister tagged behind). We got a lot of laughs and compliments everywhere we went. 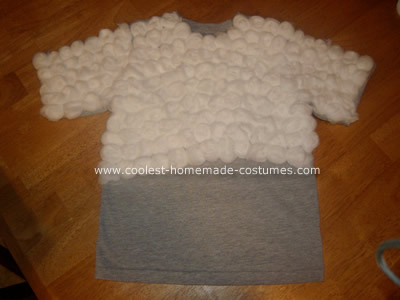 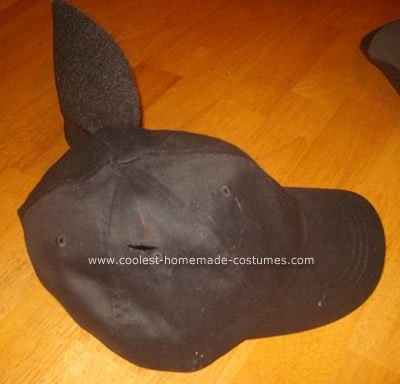 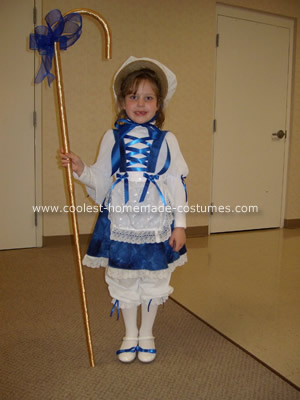