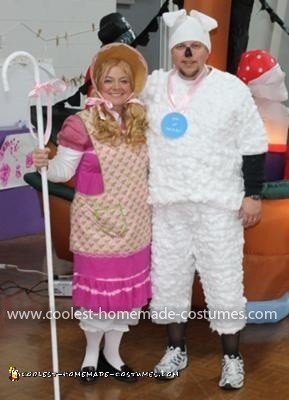 First for the sheep, I bought a white sweatshirt and a cheap($3) pair of white capris (they were women’s but they were stretchy and worked great). I cut the sweatshirt to about elbow length. I used a hot glue gun and glued all the cotton balls only on the front of both the shirt and pants. I stretched the cotton out to spread around more of the material, so it looked woolly.

For the hat we used a white toboggan, cut two small holes at the top for ears. For ears we used some bunny ears that were on a head band and just shaped them for a sheep. I had my husband wear a black long sleeve shirt and a pair of panty hose. And, we painted a little bick of black on his nose. And then from this site used the idea of the little lost sheep tag to wrap around his neck.

Now for the Little Bo Beep, I took a straw hat and cut it in half and placed lace around the front of the rim. When the hat is placed on the head, you take the round part put it toward the back of the head to make it look like the bonnet. You take a piece of ribbon and pull it down over the bonnet to get it shaped and tie it under your neck.

For the rest of the costume, I just used layers of clothes. I used a long white sleeve shirt, a shirt that had little puffy sleeves and wore a sundress that had a ruffle already in it. I then took another cheap pair of white capris that were very big and in the hem of them sewed in some elastic to make the pantaloons. I then cut an old apron, to make it short and used hot glue to glue some lace to the bottom of it.

For the staff, my husband, took a Christmas candy cane decoration for the yard and took the inside of the lights out and then inserted a dowl rod that was about the same thickness of the can and inserted it into the cane and then wrapped it all up with white duct tape and then we placed a pink ribbon on the staff. I did have a long blonde wig that I used to make the outfit stand out even more. I made pigtails out of it and put them in ribbons.

We did this Homemade Little Bo Peep and Sheep Couple Costume for a church trunk or treat and won best dressed. It was lot’s of fun! You will need about 400 cotton balls (which is 2 packs of cotton balls) and about 40 to 50 glue sticks. It seems easy putting the cotton balls on and it is, but it time consuming, so I would allow for about 6 hours of gluing the balls on.