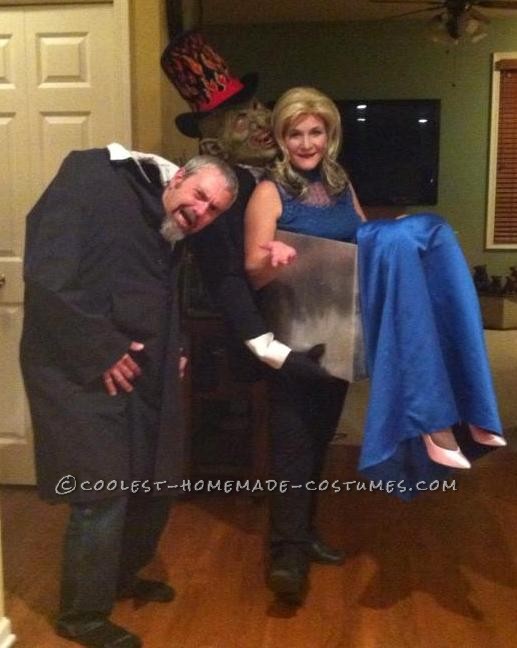 Our friends throw an amazing Halloween party every year.  They rent out a spooky children’s camp on a lake. They spend four days decorating the main building to scare and entertain their 150 guests. Our goal is always to create creative, unique costumes to show our appreciation for all the work they do to make it a memorable night.  After spending a great deal of time searching the web and digging through the coolest-homemade-costume.com site, we decided to make illusion costumes this year.  There were so many great ideas that inspired us, we decided to create two unique costumes that complimented each other.

Nearly Headless Vic and Prom Date in a Box were creative, fun to make and even more fun to wear. “Best Costumes Ever” was told to us all night long. People we didn’t know asked to take their photo with us and others told me they wondered how the guy was going to carry me all night long. When people asked how I made the costumes or came up with the idea, I told them, “I Google well.” Warning!  These costumes are attention getters.  They are not for the shy.

There is a great tutorial on how to make the costume on instuctables.com.  We purchased a men’s raincoat and white shirt from the thrift store, 30’ of wire from an electrical supply store and a roll of duct tape. We followed the instructions to reconstruct the coat and sew the shirt into the jacket.  Then bent the wire to the correct shape to hold up the coat, covered the whole structure in duct tape to support the coat and held the structure in place with a strap from an old gym bag. With a little practice and a good sneeze, Vic’s head fell from his shoulders onto his chest.

Making Prom Date in a Box:

After viewing the many great illusion ideas on the coolest-homemade-costume.com site, I knew I wanted to put a new spin on an old idea. It was important to me that I piece the costume together with items from home. I had the jacket, hat, monster mask, pants, box, wig, even the blue shirt and skirt (a bridesmaid dress she told me I’d be able to wear again!). I used two pool noodles, fabric batting, a hot glue gun and lots of duct tape.

I followed basic online instructions to make my “prom date”. I used a wooden broom handle and pool noodle for my date’s body, shoulders and neck. I duct taped the skeleton to the back of a 2’x2’x2’ box and created his chest with fabric batting I had left over from another craft project. I purchased the white shirt from a thrift store and filled out the arms and hands with more of the batting. I slipped the jacket on and hot glued the gloves (from the Dollar Store) on to the batting and box. I used a medium size craft foam ball for the base of the head and filled the mask with plastic bags. I sewed the hat onto the head to keep it secure all night long. I duct taped the mask onto the shoulders making sure that it was covered by the collar of the shirt. I cut a hole in the back and bottom of the box so I could slip inside.

To make the legs, I cut pool noodles to the appropriate length and covered them in more fabric batting to give them the desired thickness. I also folded the batting in the shape of feet, duct taped them to the legs and covered the legs in two pairs of old panty hose. I hot glued the shoes on the feet, slipped the skirt on the legs and duct taped the legs inside the box. Even though it wasn’t very heavy, I found I needed a little extra support to hold the box up without it resting on my thighs. So I cut a few more holes in the box and slipped a yoga belt into the holes when I was in position secured it around my waist.

The costume was comfortable and easy to wear; however, had I realized how much fun it would be to dance in all night long, I would have reinforced the back panel and back corners of the box.

These were by far the best costumes we have ever made. They were inexpensive to make and extremely fun to wear. Now time to start thinking about our costumes for Halloween 2014. 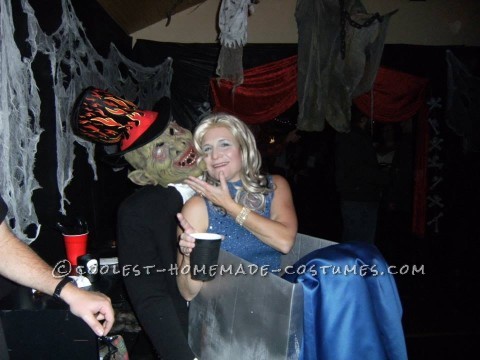 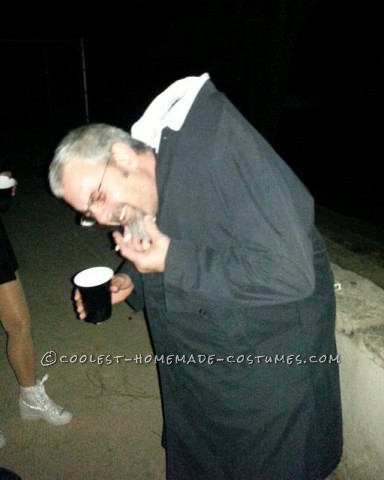