The process for making this illusion of a scary clown carrying a jack in the box costume was difficult but very rewarding in the end. This homemade costume grabbed everyone’s attention the second I walked into the Halloween party.

The reactions on people’s faces at the Halloween party when they realized it was only one person in the costume let me know the costume was a success. Not only that, but a major accomplishment of the costume I made was it made it onto the Channel 3 News Stations show “Better Connecticut” after a friend sent a video clip of the costume in action to them (News Video Link At The Bottom).

I couldn’t believe how impressed the news reporters were of it. The way I was able to create this illusion was first by getting an old box that was lying around my garage and painting it to look like an old fashion Jack In The Box.

I cut a hole out on the side of the box and put a handle that I had there which, is originally used to adjust a basketball hoop but it gave a great impression for being the crank on the side of a jack in the box.

Next, I created the skeleton of the clown dummy by using PVC pipes and covering them with foam tubing. This took me some time making the upper body of the clown to appear to be real. I had to adjust the height and length of the PVC pipes many times to get them to look just right.

Now it was time for me to add a Styrofoam head on to the top of the PVC pipe. Next, I put a black wig over the Styrofoam head, and then added the scary clown mask over the wig so it would appear that someone else’s head was really under the mask. This really added to the overall illusion you get when looking at it.

Then it was time to dress the dummy clown in some clown clothes and stuff his entire body with pillow stuffing to add some mass to him. I then added and stuffed an old pair of gardening gloves I had to make his hands. Now I cut a hole in the bottom of the box big enough to fit both my legs through it.

I then screwed in two eye bolts, one on each back corner inside the box. These eye bolts would allow me to attach an old backpack to it ultimately letting me lift it up and be hands free. I did this by cutting the backpack using only the harness part that I rigged to the bottom of the eyebolts at the back of the box with hiking clips.

I added red material that matched my shirt all around the inside of the box with Velcro appearing to be the inside of a jack in the box. For the upper part of my body I wore a red long sleeve shirt matching that material.

For the lower half of my body I wore the material matching the clown clothes so it can appear to be the scary clowns legs and not mine, and big clown shoes to match. I then added a ruffle around my neck, glued colored balls to my shirt, and cut two short pieces of gutter tubing, then painted them different colors to put on my arms to appear as slinky arms of a jack in the box.

I painted my face all white with a red smile, cheeks, and nose to give it that classic jack in the box look. Then placed on a jester hat, pair of white gardening gloves, and I was ready to go.

A creepy element that I added last minute to the costume was a little portable speaker that I connected to my phone to play the jack in the box jingle as if someone was turning the handle to wind me up.

The illusion this costume gives will truly get your attention, enjoy! 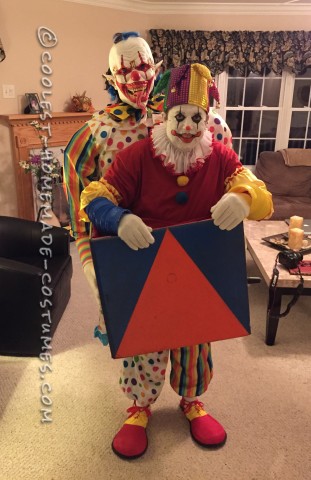 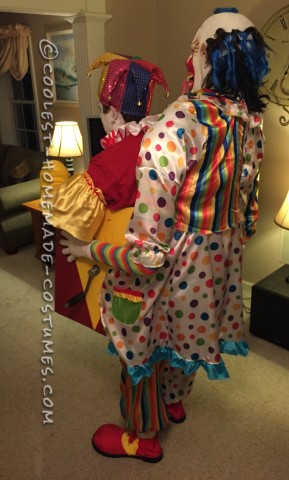 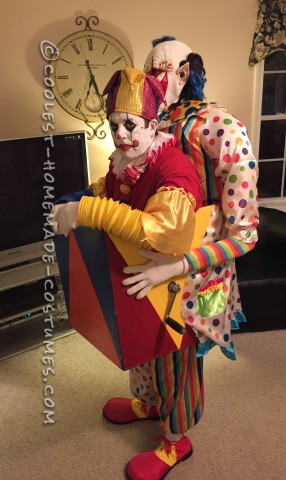 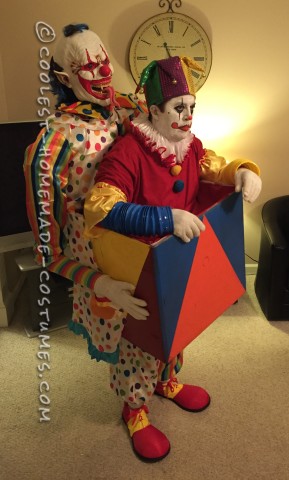