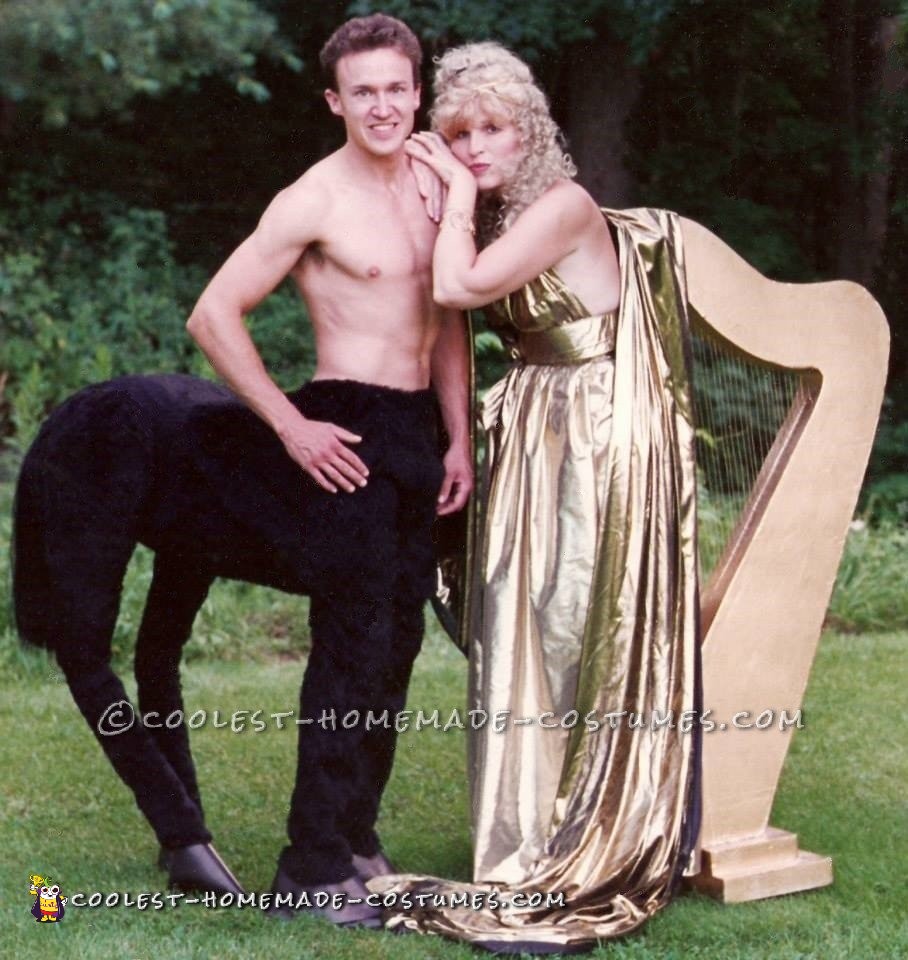 A few years ago, coworker Ken and I wanted to attend a gigantic Halloween party in Syracuse, NY, dressed as mythological characters. He had spent a great deal of time working out in the gym and wanted to show off his new physique and I wanted to portray an elegant and feminine character. Hence, the idea for the centaur and singing harp was born.

As an architectural and graphic designer, Ken utilized his skills to construct a light-weight equine frame over which dark faux fur was attached to match his own hair color. The tail was made from a simple but realistic nylon wig and the hooves were constructed of leather-looking plastic that fit over shoes with elevated heels. (Imagine the shoe clerk’s surprise when Ken requested high-heel shoes for a centaur costume!) The costume was designed to allow for mobility.

My own graphic design skills were also used to create the singing harp. Ken designed the shape—made of sprayed Styrofoam and wire strings—and I base-coated and painted the harp and constructed the gold gown, belt, and hairpiece. The harp was held in place with a harness hidden in the back of my dress. And yes, I could walk in the costume too, although it tended to bump against my heels a little!

The costumes took a few months to complete and at last it was time for the Halloween party. Our car was filled with a horse body and a gold harp, and had a policeman stopped us for any reason, he/she would have been surprised to see what was loaded in the trunk and back seat, LOL!

Upon our arrival at the club, we unloaded the “loot” and dressed in our respective bathrooms. Let me say that bathroom stalls–even handicapped ones–are not harp or horse friendly, but the people in the bathrooms were very helpful. Next, we made our way to the large dance floor where we were bombarded with compliments and questions on where our outfits originated. In an ocean of store-bought costumes, guests were amazed that we made the outfits from scratch. Ken even won a prize for his centaur!

The success of these costumes prompted us to work together on other costumes including characters from the Wizard of Oz and Alice in Wonderland. We had great fun and learned to appreciate the hard work involved in theatrical and film costuming and special effects!