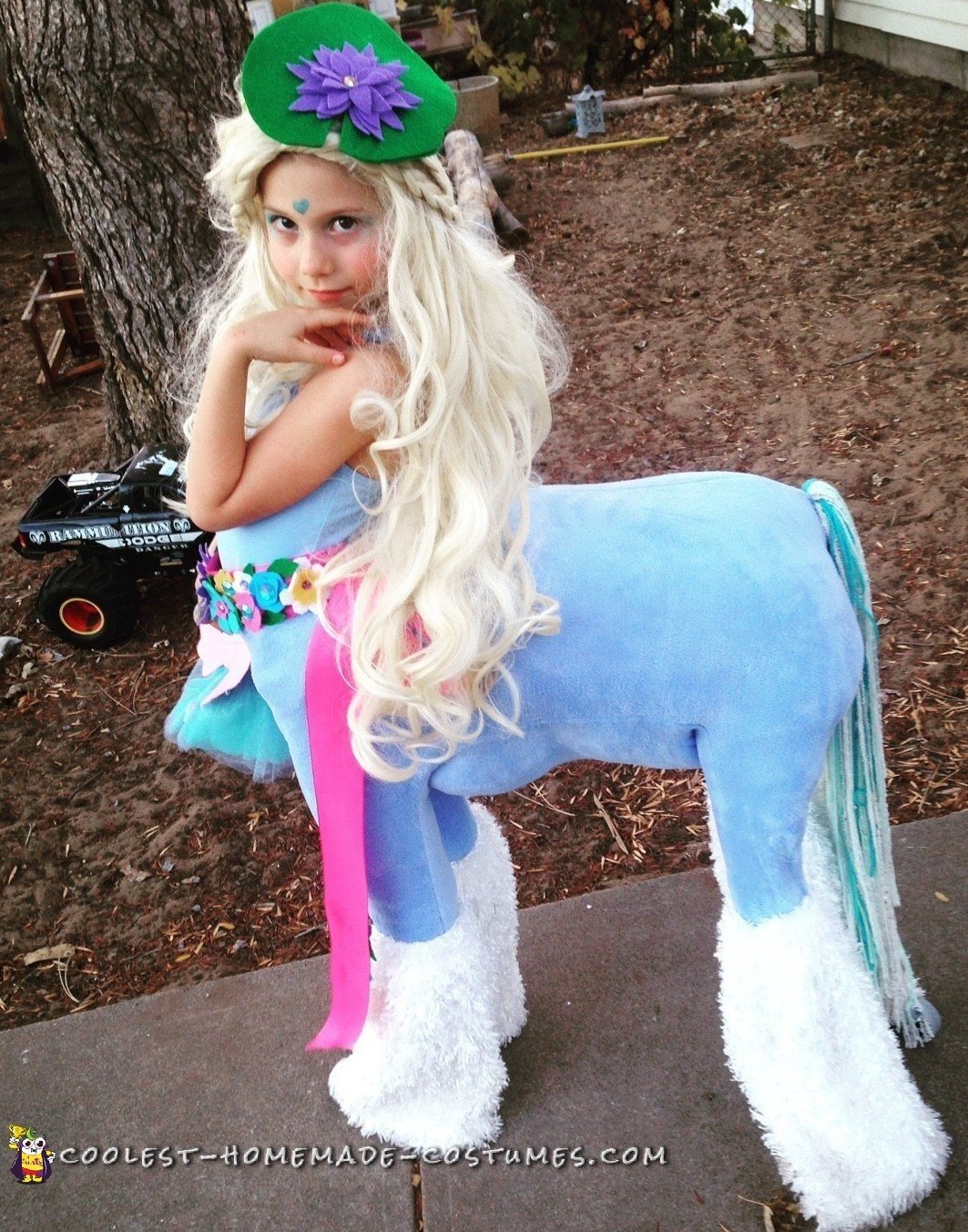 My daughter Giselle is responsible for dreaming this Fantasia Centaurette costume up! Giselle has slight sensory processing challenges that over the years has led to very selective screen time. The high drama and battles of most Disney movies overwhelm her, without fail. We try to find movies to cuddle and watch together. And more often than not, end up turning them off before even halfway. One of the exceptions to this happens to be the original Fantasia movie, which she loved from the first time she saw it. Even with the high drama parts (I think this is due to the drama being musically driven instead of with words). She plays violin as well and last year she asked, “Mom, can I play with the Fantasia orchestra?!”

So, at the start of the summer I asked what she wanted to be- and she said a Fantasia Centaurette costume. To which I responded, “I don’t think I can make that happen, girl- it would be super complicated”. She was insistent that it was the costume she wanted. I went into I’m-not-saying-yes-or-no mode and started looking at centaur costumes online. A few were cool, most were… not it… and all of them looked tricky. I mulled over trying to construct a costume like that with all the rest of life happening and didn’t know what to do.

Enter- my mom. Growing up, my mom had her shortcomings- but she was a master in the realm of costumes. I had spectacular homemade costumes every year growing up. I haven’t asked for her help with my daughter’s costumes, feeling confident in the passed torch in part, but also due to her health problems. She is only 55, but in the past 10 years she has had a handful of bypass surgeries due to a clotting disorder. Two years ago she lost her left leg from the knee down. Obviously, she has been needing support, not responsibilities. She has started to rebuild her life at this point, showing amazing strength. But I still would never have asked her to take on something like a costume.

One night, she came over for dinner and she asked Giselle what she was going to be for Halloween. Giselle instantly replied, “A Fantasia Centaurette costume!” To which my mom instantly looked at me with raised eyebrows and said, “Wow. That sounds like a serious order!” To which I responded, half-heartedly, “Yeah. I know.” She asked Giselle some more questions, then asked me what I was thinking. I told her about my fruitless web searching and explained that I wasn’t sure it was realistic. She was quiet for a moment before saying, “I think I could make it.”

I tried to talk her out of it, subtly. I didn’t want her to overwhelm herself, even though I know this is a place she shines. And then Giselle just expressed all her ecstatic joy all over the place… And I saw my mom’s joy pique. I realized that my mom kind of needed to do this for her grand-daughter- a reclamation of a self that she has lost, if you would allow me to wax poetic. So we talked some more and agreed- she would do it. She agreed to sew the body and we agreed to keep brainstorming, and I would do the accessories and help with building the form. We watched the Fantasia scene together that night to really get a feel for what Giselle was asking for.

Giselle had a certain centaurette in mind, but I think the result was a conglomerate. She was insistent on the lily pad head piece, and on being a blue centaurette. She picked out every color of felt, helped pick out the yarn, cheerfully approved the fabric choice and her grandmothers suggestions of clydsdale-like legwarmers. In addition, she stole the wig I was planning on wearing for herself and readily became the happiest centarette-to-be that ever was.

And so! A few trips to the craft store and a handful of awed conversations ensued. My mom ordered a pattern for a giant stuffed horse off Etsy, figuring she could just sew it without the head. It arrived, I kid you not, without the necessary horse pattern, 3 weeks before Halloween! Enter my mom’s true magic. She made up the horse pattern, with only a pair of my daughter’s stretch pants to figure out sizing. It ended up that the legs were too short once it was one- and so the legwarmers rescued us as well!

It took us two weeks of back and forth, my mom a whole day of sewing, and the two of us spent two 8ish hour sessions building the frame and doing the accessories- but in the end, I think we were truly able to realize the centaurette from Fantasia! Giselle’s joy at her dream realized was worth every single moment of complication to both of us.

The body is sewn out of fleece, 100% eyeballed by my mom. I cannot say more than that- her magic is too great for mere humans. The legwarmers are a furry fleece as well, with an elastic top. Her belt is pink ribbon- Giselle and I cut out and hot glued felt flowers/leaves with plastic gems in the middle. Giselle made the pretty purple flower in the center of her belt mostly on her own, cutting and gluing! My mom arranged the flowers on the belt and hot glued them while I worked on body construction.

I made the lily pad headpiece with two layers of green felt hot glued together and with a 6 layer felt lotus flower. Yay for hot glue! A sparkly green ribbon was hot glued to the bottom and reinforced with an extra strip of felt. I made the tail out of assorted yarn, folded over and bundled, then my mom sewed it in before we finalized the body structure. The wig is my Khaleesi cosplay wig off of ebay from my costume last year. I had to spend a whole morning combing it out with detangler after a year of being a dress up accessory.

Working out the Legs

The body- holy moly. Ok. So, my mom came up with the idea of pool noodles for a basic structure due to their being so light weight. We went with this, and built a frame consisting of the two back legs, the horse’s “spine”, and a bracing piece to go against my daughter’s lower back all with thrift store scored pool noodles and duct tape. Then we took 1 inch foam batting and wrapped the spine/hips, then followed up with duct tape. She tried it on, and we realized it was too floppy.

Enter here 6 or so hours of trial and error! We tried bracing the whole frame with a belt attached to the hip brace, so my daughter could bear more of the weight- that wasn’t enough, but the belt helped some. Next we tried to reinforce the back legs by bring them more into the body. I had thought with dowels at an angle, but we ended up trying duct tape layers- the legs still splayed out when she walked.

So then we reinforced the entire leg lengths with bamboo garden stakes I had leftover in the shed- and more duct tape. That seemed pretty good! Then it didn’t. Still dragging/splaying. :( My mom asked if I had wire, which I did- silver plated copper wire went in and braced the legs some more. That seemed as good as it could get. We were admittedly a bit perturbed at the quest for perfection and Giselle had tried the costume on every 30 minutes for most a day, so we decided enough was enough, and good enough was good enough! We filled the body with regular polyester stuffing and called it good.

My mom had thought to try flat plastic furniture slides on the bottom of the back legs, but my dad’s engineering brain managed to come through me and we decided wheels would be best. And they worked!

The legs still ended up splaying back after a few blocks of trick or treating. It totally stayed together, (there is no way that body will ever come apart!) but the splaying was a bit annoying. Giselle ended up hiking up her butt by her tail randomly, which was in it’s own way completely adorable. In retrospect, if I were to build the frame again, I would have built it out of 1 by 1s. They are still lightweight but would’ve stayed stiff. We were wrong in thinking flexible was a winning point! Word of caution! Altogether, the Fantasia Centaurette costume cost around $100 and took roughly a combined 30 hours of work.

Reactions to the Fantasia Centaurette Costume

We went outside to take these pictures and the first car that drove by came to a complete stop to marvel over her Fantasia Centaurette costume. Truly, it came out stunning. Our neighbors soon came by and oohed and ahhed- and people stopped and pointed her out all night to their friends/kids/parents. Giselle was delighted with the attention. That said, very few people had seen or could remember the scene from Fantasia that Giselle was inspired by! I shared a picture is a sister group on Facebook as well- and it got over 1000 likes in the past 3 days and requests to share from cosplayers. (We don’t consider ourselves as such, for the record!) Fanatic love, adoration, awe, curiosity, proclamations of winning Halloween… Giselle and her costume got it all!

When Giselle got the whole Fantasia Centaurette costume on, my mom and I were stunned ourselves. We worked really hard on this and had a lot of moments where we thought it was going to fail- but we kept at it and she just looked amazing and it worked.

Giselle’s reaction was the absolute best. Watching her shake her horse booty around is beyond description- too funny! She had specified that she wanted “a really nice horse butt”. :) Just look at that sass. All centaurette, as well as the happiest 5 year old girl in the world.

I really want my mom to be honored for this work. She has had an incredibly hard time, obviously, for the past few years- if not her whole life. She has always been creative, but that outlet has been lost for her since her surgery. This was so much her work and vision.

Thank you for your consideration and blessings on you! 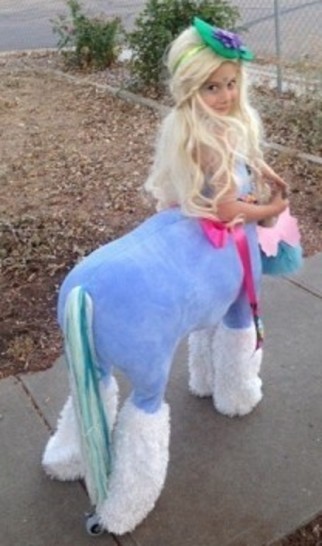 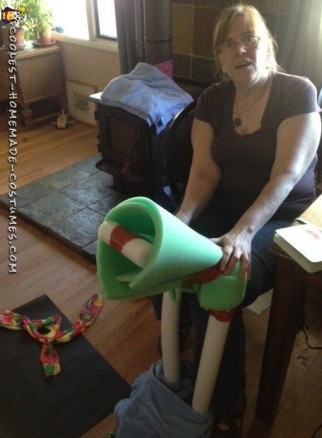 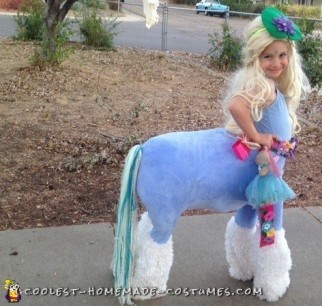 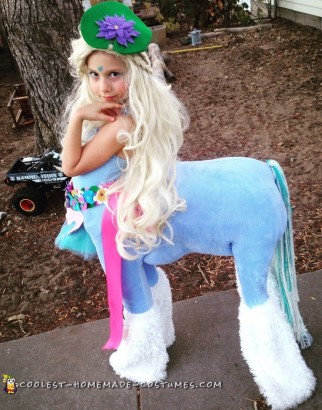