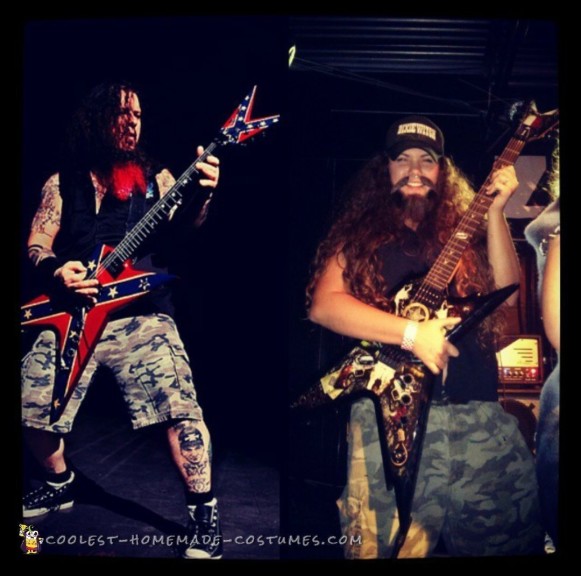 My DIY Dimebag Darrell costume was made up of 1 purchased item! The beard! The clothing pieces (mens camo shorts, a ripped off sleeveless band shirt and ball cap) were loaned to me by my husband and the signature Dimebag guitar was loaned to me by a friend!

Dimebag Darrell was an American guitarist and songwriter best known as a founding member of two bands, Pantera and Damageplan. He is considered to be one of the driving forces and innovator behind groove metal.

Dimebag was shot and killed by a gunman while on stage during a performance with Damageplan on December 8, 2004.

I grew up listening to Metal. Music is a huge part of my life as well as I think everyone’s lives! We literally let these crazy musicians into our personal worlds. They become a part of us, helping us along as we grow up. They are there for us no matter what, at the push of a button or change of a CD. Through the biggest moments of our lives, as well as the highs and lows. Pantera along with other great metal bands was definitely one of my top go too bands growing up!

I was talking to my husband about if or what I was going to be for Halloween this year and as Pantera’s Cowboys from Hell album was playing in the background, it hit me. I’m totally being Dimebag for Halloween! I already have the hair! Just need a beard! So I jumped on the computer and ordered my Dimebag beard!

Peoples reactions had to be the best as well as funniest part of getting to be Dimebag for the day! People would recognize Dimebag and come up and talk to me, hear my voice and realize then and be stunned that I’m a female! It was great! And I got major complements on how much I really looked liked him!

The hardest part had to be trying to speak with a lower tone of “man” voice and being a legendary guitarist I had to try to learn a quick little dime bag guitar riff! I tried SO hard, but it just wasn’t happening for me!

Dimebag remains one of the most loved and respected guitarists of all generations all over the world!

It was definitely an honor to bring Dimebag back for a day! I think its great that people were reminded of him and their old memories with him! RIP dimebag!