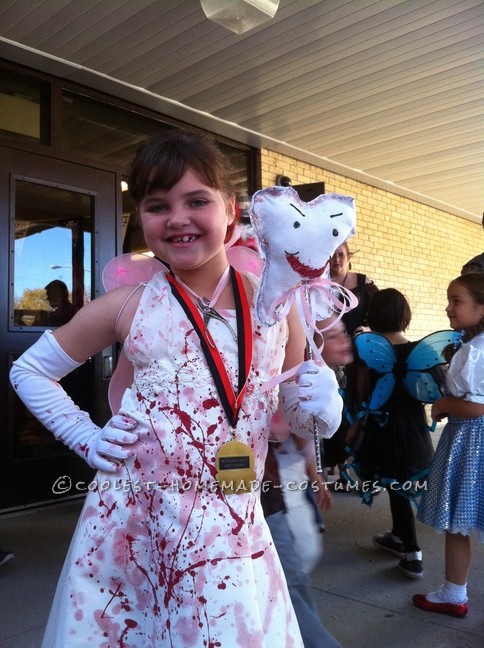 My daughter who was 7, always wanted to be something scary for Halloween like her 4 brothers.  Being the only girl of the bunch, I wanted her to be something cute and pretty.  So we compromised! Everything in this entire scary and not-so-sweet Tooth Fairy costume we already had.  I did not purchase ONE THING!!

All we did to the dress was used red paint and fake blood we already had to make blood splatter.  Then I had her put on the gloves, put “blood” on them and wiped them down the front of the dress.

Mini-plier necklace- I’m not sure why I had a tiny pair of pliers, but I ran some pink ribbon through them and they hung perfectly around her neck.

Wings and Wand- She had a fairy dress-up set.  So we used the wings as is.  The only part that actually required some effort and “creativity” (if that’s what you want to call it) was making the tooth wand.

I took an old white t-shirt and drew a tooth shape large enough to go around the star on the top of the fairy wand.  Cut it out, traced it on the other side of the shirt so there were two sides.  I used tacky glue to glue the two sides together, leaving a gap at the bottom to slide the wand in.  After it dried, I massacred an innocent stuffed animal for the filler to put into the tooth wand.

Chelsey took FIRST PLACE at our community/district costume contest.  Beating over 100 other kids! 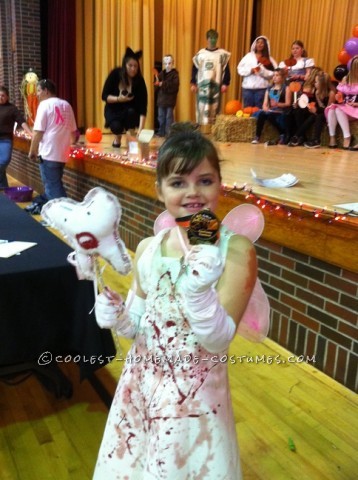 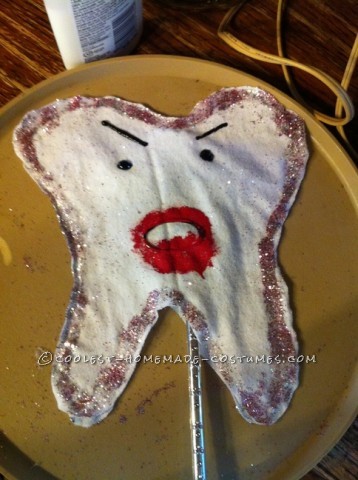