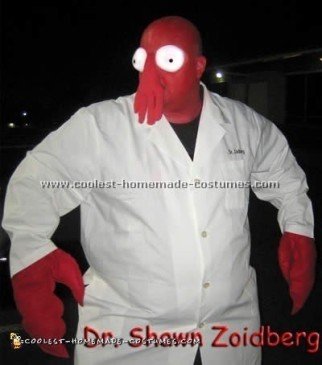 I didn’t even know who Zoidberg was until my boyfriend told me that he was going to be him for Halloween right after we met. So I was wondering how he was going to do it and I had a few last minute costume ideas for him.

I ordered a Lab Coat from AllHeart.com or something like that and had it embroidered with “Dr. Zoidberg”. For the claws he bought a hot glue gun and some felt and I was kind of puzzled as to how to make them. Cute/realistic/wearable just make sure to have good scissors, stack the felt two at a time and wisely cut so that the two pieces match up. I used elastic to keep them on his wrist and stuffed them with polyester fill to make them more functional. 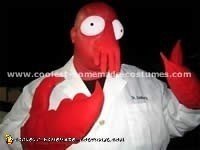 For the face we lucked out. Tripped over a Bart Simpson mask at Target and we ended up making the eyes into the shape of goggles leaving tabs on the side for elastic attachment to hold them onto his head. The “mouth fingers” were a pair of women’s gloves. (I cut the thumb off and hand sewed it shut and then took the part and attached it to itself in the back behind the mask, also stuffed the fingers a little. We then painted his head with some cream makeup from a Halloween store ($1.50) and it goes a long way. You can cover the elastic with it too but be careful not to dye your eyes red unless you are going to go as Zoidberg with pinkeye. 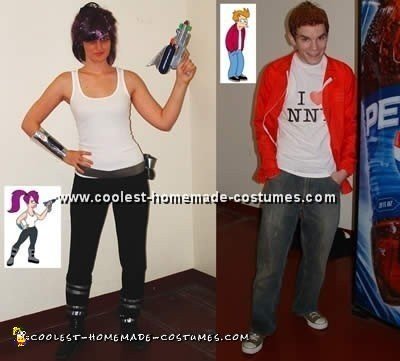 These are our incredibly simple last minute costume ideas that earned us many wows and looks at our Halloween parties. For anyone who has seen the once-canceled soon-to-be-revived show Futurama the costumes are plainly and obviously awesome!

The Fry costume: This turned out to be very easy. I already owned the converse shoes and the jeans (any sneaks will work). The red Members-Only(R) jacket was a cheap, $10 pickup at the local thrift store. The hair was $5 of orange washout hair spray and a handful of hair gel. The “I HEART NNY” shirt was $5 at OfficeMax with the iron-on transfers little, MS Paint action and my trusting ink-jet printer.

The Leila costume: This one took about 3 more seconds of effort than the Fry. Boots and black pants were already owned. In order to get the bulky boot look we wrapped them in black leg-warmers and did the two duct-tape bands for the futuristic buckle look. The top was a $2 undershirt from the drug store. Ray gun was from the dollar-store next to our apartment with a little cardboard add-on to make it more “ray-gun-y”. Most expensive part was the $15 wig from the same thrift store we got the red jacket from.

Our last minute costume ideas, when done together as a couple was a huge smash. Animated characters may seem daunting but little tricks can make them stunningly successful. 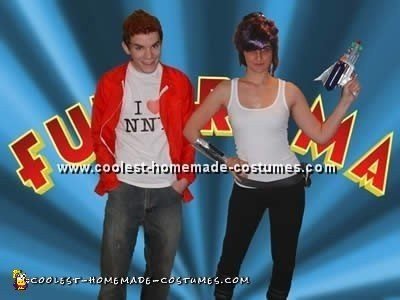