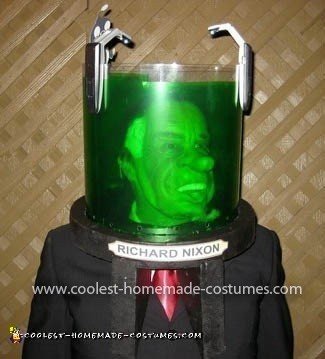 On the headless body of Spiro Agnew! I’m a big fan of the Futurama series, and have been thinking about doing a head-in-a-jar costume for a few years.

The biggest problem was finding the clear plastic cylinder, I spent a few days emailing various plastic manufacturers online and local on getting an acrylic cylinder, most places didn’t have anything with a large enough diameter, and those that did needed to special order and wanted crazy amounts of money. I ended up finding a place locally that suggested rolling up a sheet of polycarbonate, which is super thin and rigid enough to hold up, and cheap!

The green tint was from a roll of cellophane gift wrap. The base is carved foam and a printed out placard which can be swapped out. Originally it was just going to be my noggin, but was able to track down a Nixon rubber mask after calling all the Halloween places in the area, and I got the last one!

The last bit was the lights which are clip on LED reading lights. These are functional and add a really cool effect when it’s dark. Worked out perfect.