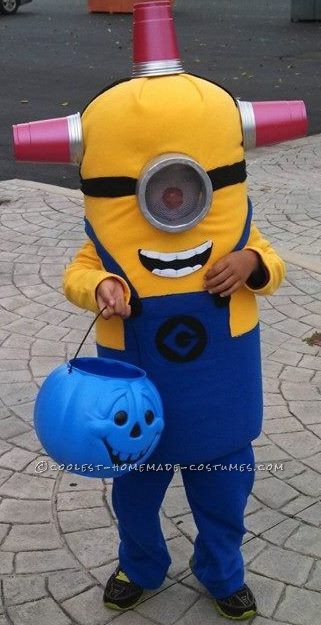 It all started with a simple question, I asked my 6 year old what he wanted to be for Halloween. His answer: a minion. Great, that was simple enough, and then he started to get specific. He wanted to be the bee do minion and his costume had to have lights so he can alert everyone and he had to be able to chase the cat. I don’t know why but the cat part was really important.

I searched online and looked for ideas on how to make a minion and slowly but surely I pieced together a rough idea of how to make it happen. My son is small for his age; he’s 3’11 and roughly 40 lbs. which presented its own problems. I needed something light and small and round and preferably a dome shape. A blow up punching bag was the answer to it all. It was round enough but small enough that it would sit close to his body and the dome shape on the end was just what I needed.

I got to work using brown craft paper to make a paper mache base for the costume. Once it was done I quickly discovered a big problem. The base was too small for my son to get his arms into and if you can’t get your arms in then you can’t wear it.  Enter plan B. I blew up the punching bag again only this time I wrapped the bag in 600ft of clear plastic wrap before I used the paper mache and it worked perfect.  It added the extra couple of inches I needed without any extra bulk or weight.

Once the paper mache was dry I deflated the punching bag and pulled out he plastic wrap which looked like a really cool shiny minion skeleton.  It was time for the fun part to begin. I cut the arm holes out using a roll of duct tape as my size guide since it measured just a little larger than my son’s upper arm and I used a CD as the template for the eye.  I also cut four 1-inch slots. Two in the front and two in the back that was slightly lower than the top of the arm holes. I used an old belt made from webbing to make shoulder straps so the costume could sit on his shoulders and pulled the straps through the costume and glued them to the outside so that they would stay secure.  We tried on the costume to make sure everything would fit and then the fun part began.

For the actual minion body I wanted him to look soft and squishy so I sprayed the base with adhesive spray and wrapped it in quilt batting. I made sure to wrap the excess around the arm hole opening to create padding for added comfort. It is for a kid and as any parent knows; if the kid isn’t comfortable no one is happy. Once the batting was dry and in place I used yellow fleece to make a slip cover. I pinned the fabric around the base first to make sure the shape and size were correct then I used blue fleece to make the overalls and pocket and black fleece for the G logo and buttons. The mouth was black fleece and white fleece. I used a pencil to write on the fleece to make the teeth outlines. It made just the right amount of shading for it. Everything was sewn onto the yellow cover and then it was put on to the base. I cut the openings out of the fabric and again wrapped the excess around the openings to create some extra padding. At this point it finally started to look like a minion. I used black fleece to make the straps for the goggles and the beacon head pieces after everything was on. In hindsight I should have sewn those on also but hot glue worked just as well.

For the goggles I used 2 Styrofoam circles. I glued the two circled together and cut out an inner circle the same shape as the cd I had used for the eye opening and measured out ½ inch and cut the outer circle. I used paper mache to give it a rounded look and so that it would hold pant well. Once it was finished I sprayed it with metallic silver spray paint and attached 3 layers of white tulle to the inside and used hot glue to attach it to the yellow base and over the black strap. The eye was originally a brown wrapper from a Resse’s I was eating while working on it with some White Out as the iris that was glued onto the tulle but it was lost somewhere while at a party so I simply traced a thread spool with a brown marker and colored an eye directly onto the tulle. They both worked just fine.

The beacons were the real challenging part. To make the actual beacon I used clear plastic cups and painted the top part with red metallic acrylic paint and the bottom ring is the same metallic spray paint I used for the goggle. The paint chips easily so a clear coat of spray paint is important if you are going to be around any doorways.  The real challenged of it all was that they needed to flash. This meant having them glued on to the costume was out of the question because I needed to be able to turn the lights on and off. To make this happen I cut Styrofoam circles that were just slightly smaller than the cup/beacon and hot glued the circle to the black band on the costume then glued the light to the foam. I used clip on Energizer led emergency lights. They were red and they flashed and could be turned off and on easily so they were perfect for this.  I didn’t glue them at first but after trick or treating in an office building and having to get attorneys help to move a couch in crowded room to get a flashing light back learned my lesson, so just trust me. You’ll want to glue them onto the costume.  The cups fit snugly over the styrofoam circles and stayed well for the most part. After tapping a few door frames they came off a couple of times but nothing too bad.

At this point the body was done but he lacked arms and legs which are somewhat important if you are going trick or treating. For comfort reasons I decided to make the pants and arms separate pieces. The arms were just simple tubes I sewed out of the yellow fleece. Once the costume was on they were really easy to just slip on over his arms and pull all the way up and tuck the ends inside the arm holes.  For the pants I used a basic pajama pant pattern to make pants out of the same blue as the overalls.  This made getting the costume on and off a lot easier too. When he needed a break or to sit down all I had to do was pull the base over his head and he could do what he wanted and when it was time to go again I just had him put his arms up and slipped it back on.

Everyone loved this costume. He won 3 costume contests and all night long all we heard was ‘look at the minion’ or ‘bee do bee do’. It was a huge hit especially with teenage girls. I can’t explain it but on more than one occasion there were girls following him around and giving him extra candy. We also had a lot of people who wanted to take pictures with him which he loved because often they gave extra candy to him because he was willing to stop and pose with them.

For my son the best part came after Halloween.  We have 4 cats so he was able to put on his costume and go out in the yard and chase them all. The poor cats didn’t know if they should be scared or come closer to investigate so he had lots of fun with that. 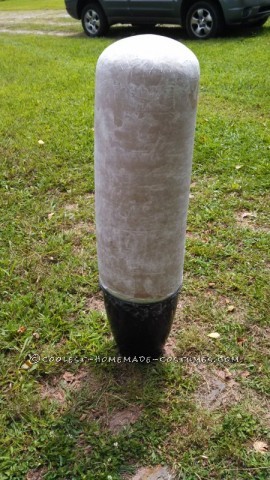 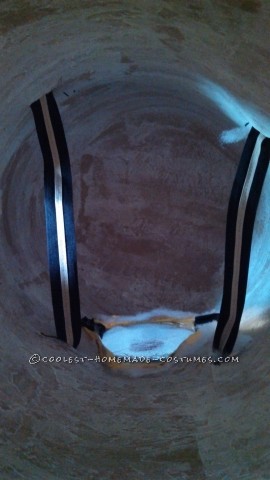 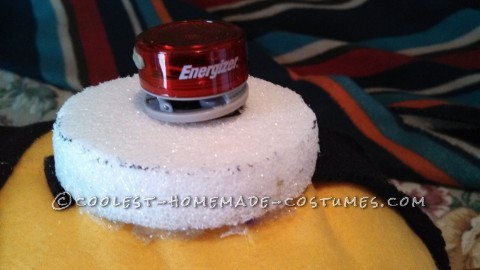 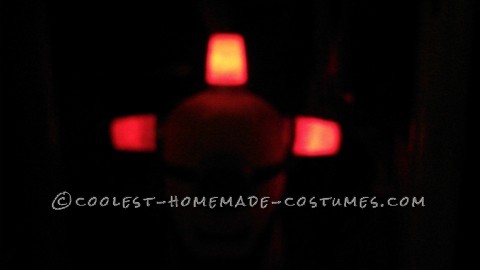 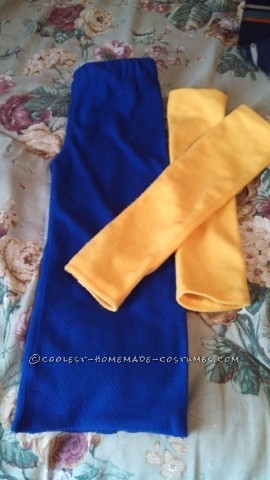 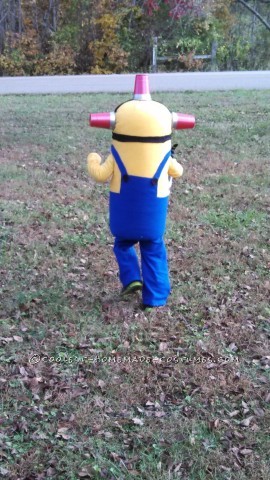 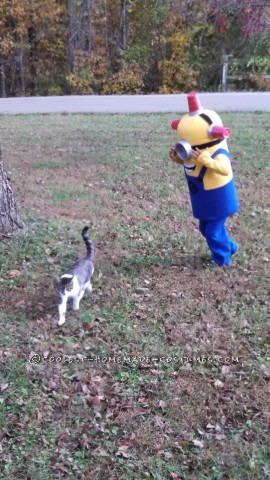