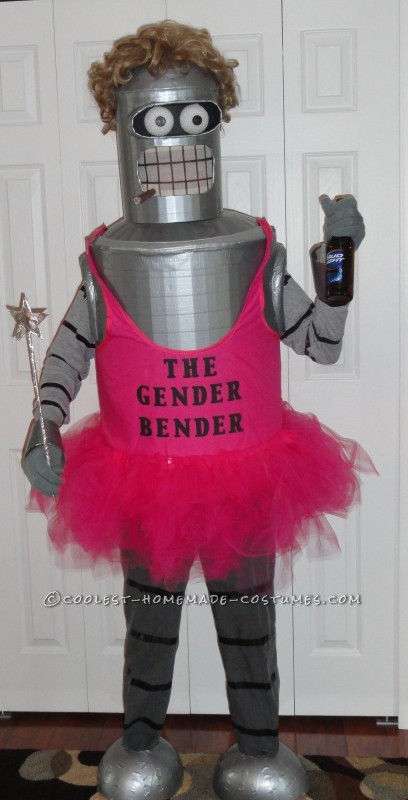 I wanted to do something special this year so I chose the “Gender” Bender. For Bender I spent a lot of time on Bender’s head. It was important to get the right look. The cutting of the cardboard visor was a tricky part. The head is constructed of cardboard rolled and taped. The dome of the head is a Colander from the Dollar Store. The top of the head was going to be covered with a wig so the shape did not have to be perfect. The eyes are Styrofoam balls with black chair tacks for pupils. The eye visor is just cardboard covered with tape. The Cigar was created from cardboard wrapped in masking tape painted brown shoved into a slot behind the teeth. The mouth is made with cheese cloth and the teeth were made with a magic marker.

The body needed to be flexible so I could sit down.  So I decided to go with a short body and use the Tutu to cover my waist down. The Gender Bender Tutu was perfect to allow me to sit. The Tutu was made with material, elastic and Tulle. I cut out a paper pattern and my wife sewed the TUTU. I glued the pink material to the costume body but used Velcro on the shoulder straps so I could remove the top.

The body was created out of cardboard. The body needed to be open on the back so I could get in and out of it. Also the top had to be attached someway where it could be removed at will. So I built it out of cardboard and attached the top with Velcro. I also fastened the body together in the back with a Velcro flap.

For the arms and legs I chose to use gray shirt and sweat pants so I could move around easier without overheating. Then I used black electric tape for the lines. The shoulder sockets were made from foam pipe wraps and covered in duct tape. The foot covers are made from a half cut basketball and duct tape.

For Benders antenna I used a small Christmas bulb and an old metal tube from a gutter nail. They fit together perfect. The used wig was found on eBay. The letters were cut out using a Cricket machine.

Total cost under $40. The biggest cost was the wig and duct tape. Lesson learned – don’t use cheap duct tape. Buy the stronger stuff so it stays put.