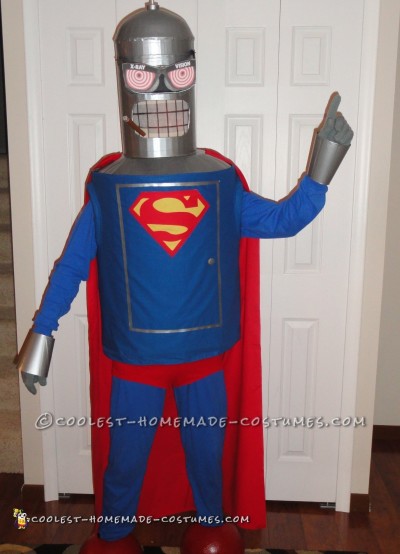 I made this costume for a 1st annual Comic Con in Grand Rapids Mich. I already had a Bender costume from last year’s Halloween party. So I just needed to make him into Super Bender. He was a huge hit with the fellow Cosplayer’s. Everyone seemed to relate to Bender, even more so as the Can of Steel.

Bender was fairly easy to construct with cardboard and tape. The body opens in the back for easier access. For the arms and legs I chose to use a Fantastic four costume that I already had. It matched very close to the blue material I needed to make the body with. (The nice thing about using Mr Fantastic as a base costume was that when you tire of wearing Bender you just remove on costume and revert to the other.) Benders shoulder sockets were made from foam pipe wraps and covered in blue material. I made the cape and the body on a sewing machine. The red shorts were from the thrift store and taken in for the costume.

The shape of the head was the hardest part. The eyes are Styrofoam balls with black chair tacks for pupils. The Cigar was created from cardboard wrapped in masking tape painted brown shoved into a slot behind the teeth. The mouth is made with cheese cloth and the teeth were made with a magic marker.

I thought it would be funny to give him super powers like x-ray vision. (I had fun with that feature.) So I made a pair of those cheesy x-ray glasses that were always advertises in the back of comic books. I used a printer and cardboard for that.

The foot covers are made from a basketball and painted red. I should have used something bigger to cover my entire foot.

For Benders antenna I used a small Christmas bulb and an old metal tube from a gutter nail. They fit together perfect.

Since I had most everything from before the biggest cost was material for the outfit. Total cost from scratch might be $50 depending on what you have handy. 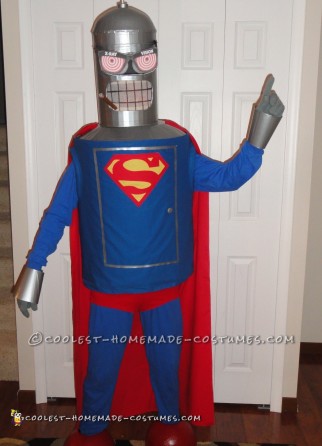