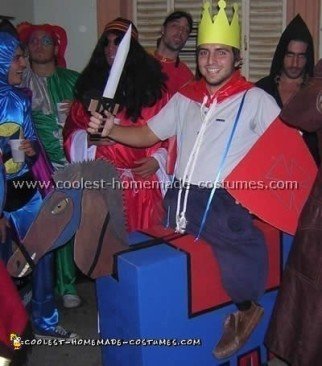 This is a horse costume I made for a birthday party we had in a house. It’s a knight or a king riding a horse. The funny part is that you will look like a little person riding a horse!

You will need a cardboard box as wide as you are and approximately four feet long (I used an air conditioner box), cardboard for the head, tail, crown, sword, shield, rope to hang on your shoulders, old pants for little legs, old shoes for little feet and paint.

STEP 1: cut off the bottom of the box and make a hole in the middle of the upper side big enough to fit your waist through. Cut two slots on the upper side, one in the front and other in the back to put the head and tail through.

STEP 2: draw a horse head shape on a cardboard with a square part in the bottom (this will go inside the slot and hold the head up), same for the tail.

STEP 3: try everything on! Put the box on your body and the head and tail in the slots.

STEP 4: take the old pants and make a big hole in the crotch. It must be big enough for you to fit through. The legs will be hanging to your sides. Cut the pant legs at the knee and sew the old shoes to each leg. Now fill the legs with wrinkled newspapers to give them volume and shape.

STEP 5: make four holes in the upper side of the horse box to pass a piece of rope through on each side. Measure the rope, the box should be right below your waist.

STEP 6: paint the box like the horse has one of those dresses the kings used to put on their horses. I painted it blue with details in red and silver. Paint the horse’s head and tail as realistic as you can. I used common art paint.

STEP 7: make a crown, a sword and a shield out of cardboard, paint them. First put the old pants on then the box then the head and tail in the slots and you are ready to go! Wear black pants and black shoes on your real legs to complete your horse costume. 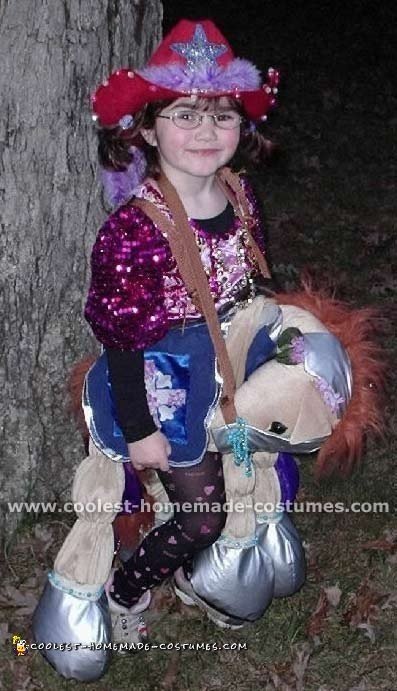 My 4-year-old daughter love horses. While shopping for a costume she saw a medieval horse costume, one that straps onto the child by suspenders. She was very excited! I wanted the out fit to be a little bit more girlish. I don’t enjoy sewing, although I am the queen of a glue gun!, , First the hat, I purchased in a toy department. I took apart a beaded crown and glued the beads on the top edge of the rim first pink then white (crystal) then rotating until they went completely around the brim. I decorated the underside of the brim the same way as the top edge of the brim (pink beads to pink beads, white beads to white beads).

I had a foam star and covered it with glue then multicolored sparkles. I had an extra craft pin backing and glued that star which I then pinned to the hat (you could easily glue the star to the front of the hat by itself). I then took a pink feather wrap and tied it to the top base of the hat. It took about 15 minutes to complete the hat.

I decorated the costume with different beads on the mussel and glued on the underside of all the material. I used a different string of crystal blue beads around the legs/huffs of the horse costume. I decorated the shields on the sides – the crest with purple silk lilacs first a green then a flower or the bud. For the tail I had extra pieces of an old costume (you could use any fabric) and added glue then glitter to the edge of the material to give it a glittery effect.

I tied the material once on the tail then added green leaves then the same purple lilacs to the tail (I did this twice). I also glued some flowers along the neck of the horse costume. The shirt/body suit I got from a thrift store, it has sequins throughout it (not perfect in condition but would do).

I glued untied strings of the sequins. I put my daughter’s hair into ponytails added a smidgen blush and a little bit of lipstick. She was thrilled when she wore her horse costume. While trick-or-treating she kept tripping over it, but still insisted on leaving it on.

The whole amount of time I spent constructing “The Horse on Parade”- approximately an hour and a half (not including time to shop for the horse and the hat). It was fun and required not a stitch of thread! 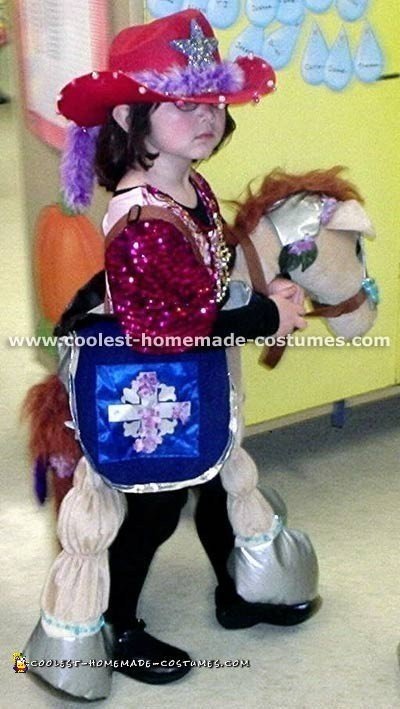