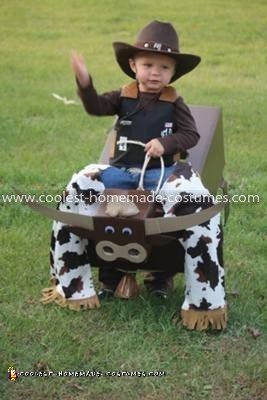 My son Sawyer is 2 1/2 years old and is obsessed with bull riding. That is all he talks about and watches on TV. I thought this Bull Rider Costume would be the perfect costume for him. Sawyer named his bull “Dean”. This costume was a hoot and had many heads turning as he walked by. I could not have come up with a better idea for my son.

I used 2 different sized boxes and painted them brown, 1 for the face and 1 for the body. I then glued the head to the body and cut a whole in the top of the other box for my sons body to go, as his feet would be the front of the bulls feet.

I bought brown pants to wear so they would match the bull. I then drew a nose, ears, horns and legs out of cardboard and painted them to match my bull. I then glued all the body parts in place. I also took a piece of pillow stuffing for hair on the bull and painted that too. I glued googly eyes on the face.

To give the illusion of riding the bull, I stuffed a pair of jeans with paper, put chaps and cowboy boots on them. I then belted these pants to my sons other pair of pants he was wearing so they would stay in place. Then I put the stuffed jeans over the top of the bull to make it look like he was riding it.

I glued a rope and a bell around the bull and tied it in a knot on the top of the Bull to give him something to hold on to.

I then added suspenders to help hold “Dean” in place and got a store bought cowboy hat and vest to finish off the Bull Rider Costume. 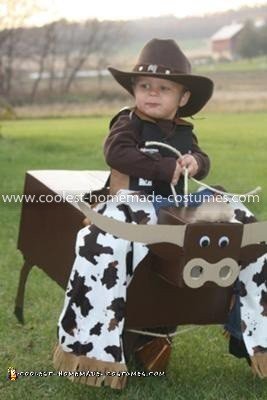 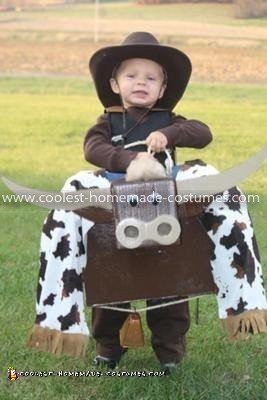