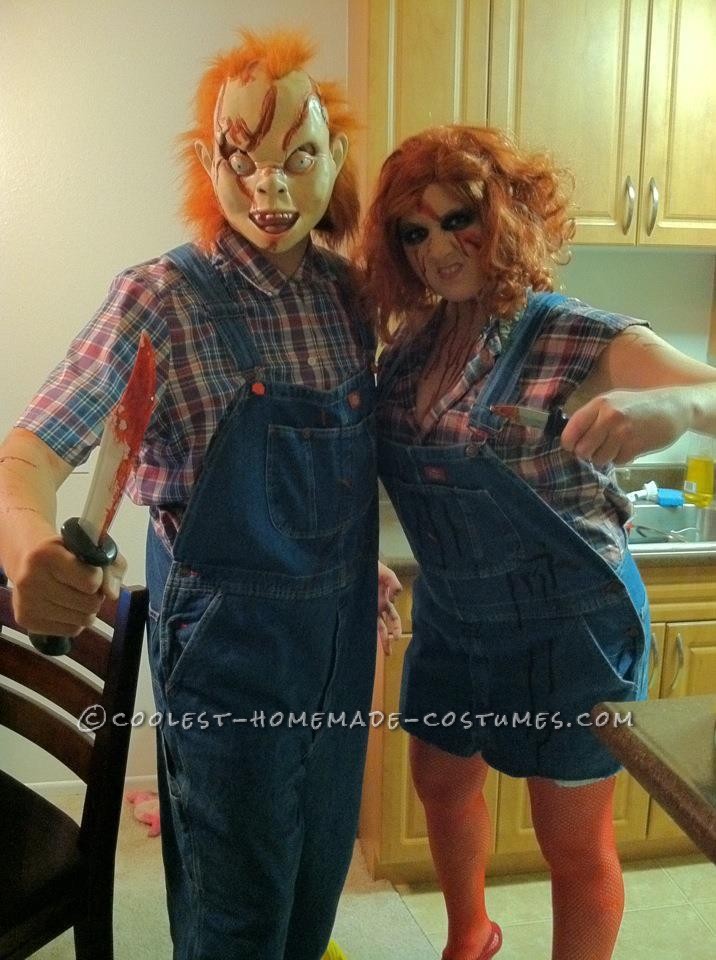 My boyfriend and I created our own Chuckie and Chuckie’s sister costumes for Halloween 2011. We went through a lot of trouble getting the costumes together, but we made them look amazing! We got multiple reactions from people at a party we went to, and everyone loved our costumes. My boyfriend is 6’2″ and with him wearing this costume he was super scary, being so tall.

First, we went to a dollar store to find some cheap overalls that we could cut and spill blood on for our costumes. We had to sift through piles of overalls that were just thrown on the shelves, hence why they were so cheap. We tried on multiple sizes at the store in front of customers, which was quite hilarious. Then we went a few goodwill stores, and searched through shirts for about 2 hours. We were DETERMINED to find two flannel shirts that had the same coloring of Chuckie’s. Finding two of the same colored flannel shirts in guys and girls sizes are not easy.

Then we bought blood and a wig for me to wear to complete the outfit. When we were getting ready for the party, we had to cut my wig so that it was shorter, because it looked all weird being long. Then we had to cut my overalls and the sleeves of my shirt in order for it to look more girly. Then we took fake blood and fake scar paint and put it all over each-other. My boyfriend also wore his combat boots, since he is a marine, which went perfect with his outfit as well. I wore red high heels with red fishnet tights. I think that the costumes turned out great, and we definitely scared a ton of people that night.  Many people were startled with how tall my boyfriend was with the mask on, and we received many compliments. I even got scared when I turned around and saw him, he was very real looking.

This is the best costume we have ever created from scratch, and we definitely want to do it again next year. My boyfriend is deployed this year, otherwise we would have done something similar again! I hope you all like the costumes, and hope you all have a Happy Halloween!!! 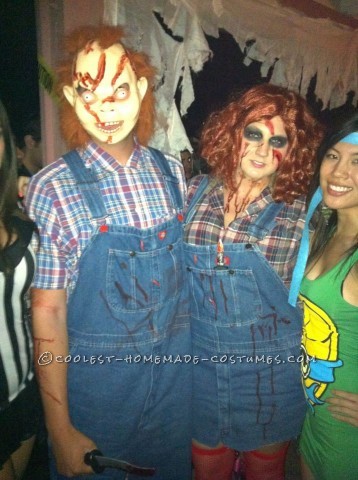