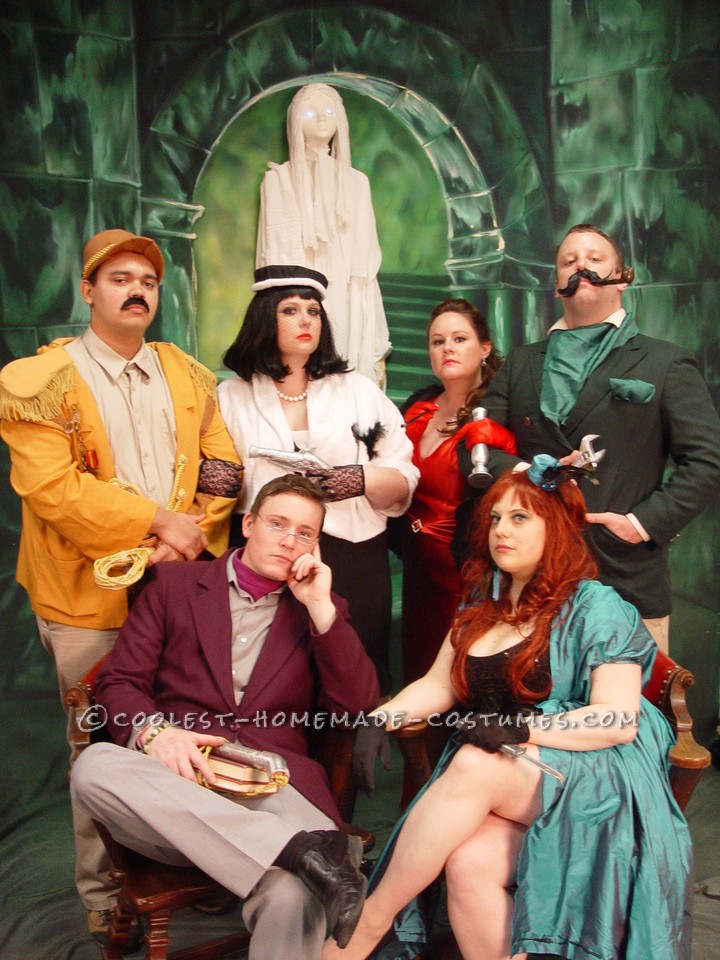 I love to dress up.  No matter the holiday, theme, or occasion I will find a way to costume-it-up.  So, obviously I love Halloween.  Each year, I commit days, weeks, (and this year) the past few months to putting together my Halloween costumes.  I put blood, sweat, and tears into designs for myself and my friends.

This year, I gave myself the ultimate challenge, to put together a Clue characters group Halloween costume.  I created six unique costumes for myself and my friends.  We were the characters from the board game CLUE: Mrs. Peacock, Professor Plum, Colonel Mustard, Miss Scarlet, Mr. Green, and Mrs. White… complete with our individual weaponry.

(For those of you that do not know the game… here is some background: Mr. Boddy – apparently the victim of foul play – is found in one of the rooms of his mansion.  To win, you must determine the answers to these three questions: Who done it? Where? and with What Weapon?)

I created these one-of-a-kind costumes from fabric I sewed (and hot-glued) by hand, some thrift store finds, and some crafty uses for cardboard.  I tried to stay in a 1940’s-ish theme, but each with our own individual looks.  It was also important to me that each costume came with somewhat of a back-story and personality.

We had a lot of fun this year, but I think the most fun was doing our photo shoot in an old-time photography place.  The people there loved our costumes, and loved coming up with fun and unique photos for us (see some samples attached) and we loved posing for them!  They were even gracious enough to clear off an old bar set for us – just so we could do some 1940’s style poses on the bar.

Below are some details about how I put these costumes together:

I put my own spin on the typical blue-suited, grey-haired Mrs. Peacock from the board game.  I decided to be a showgirl peacock.  I had a short black flapper/vaudeville dress, and made a 100% silk peacock-blue coat to go around it.  I fixed it with a belt that I embellished with peacock and black feathers.  I made my own peacock earrings, and a small fascinator hat.  The hat was made a from a small, round cardboard box.  I covered the box in thick ribbon, and added black veil material, peacock and black feathers, as well as a large jewel to bring it all together.  I completed my look with a bright red-headed wig, some black gloves, and simple black wedges.

The entire outfit (with the exception of the lead pipe and glasses) came from a local thrift store.  The plum jacket and turtle neck were found in the woman’s section, and the greyish/purple pants and grey shirt were found in the man’s section.  I had originally conceptualized the professor to be wearing a button-up shirt with a bow tie, but I thought the turtleneck would give it more of that 1940’s “study” look.  It took a few different times combing through the entire thrift store to find these jewels, but in the end I thought the outfit came together very nicely.  The books, which were titled “How to Get Well” and “Psychodynamics of Psychotherapy,” gave the professor the back-story of also being a psychologist.  The glasses (or specs as I called them) came from the dollar store, and to me gave the outfit that little something extra.

Weapon of choice – lead pipe… was actually PVC pipe that came from a hardware store, and was sprayed the same as the other weapons.

Colonel Mustard’s jacket was made from a woman’s blazer found at the local thrift store.  Because a woman’s jacket would not fit him, I extended it by adding a brownish fabric to the sleeves and back of the jacket.  I purchased a mustard colored shirt that I used for extra material.  The epaulettes (things on the shoulders) were made from cardboard boxes; I cut in the shape, and then covered with shoulder pads from the shirt (for extra padding) and then covered with the mustard colored shirt itself.  The fringe around the epaulettes were curtain accents I bought at a fabric store.  I made his monocle using a small magnifying glass I found in a glasses-fixing kit at the dollar store.  I added a chain from the craft store, and pinned the chain and monocle to the jacket.  I found a military pendant from the craft store, which was also pinned on the jacket.  I also found some gold military buttons that I sewed onto the jacket, and then added curtain rope around each, to keep the jacket together.

His hat was made from a flimsy plastic football-shaped hat, that I cut the top off of.  I covered it with the same brownish material from the jacket, and added more curtain rope, and sewed on some additional buttons.  The shirt and pants were purchased from a thrift store.

Weapon of choice – rope… the only weapon that is not silver in the game.  I found some thin rope at the dollar store.  I tied it into a small noose and hot-glued around it to keep it together.

Miss Scarlet’s dress was a $5 purchase from the thrift store.  It was a few sizes too small for her, so I found some extra material (that matched perfectly) from a fabric store, and added it to the back of the dress, which made a nice train.  Inside of the dress, I hot-glued in a bra, so that the dress would be able to fit her and be held together.  Her matching gloves were a costume store purchase.  I made her fur coat from some shag fur at the fabric store.  Her hair embellishment was a pendant found at the craft store, that I glued some furry black feathers too, and then pinned into her hair.  I completed her look with a fake cigarette holder (costume store) and a matching red purse (prom/wedding store).

Mr. Green’s outfit was another find at the thrift store.  Because there are not a lot of differences between the professor and Mr. Green (besides the colors), I wanted each to have their own identifiers (which was why only one could have glasses, and only one could have a mustache).  The green jacket was found in the man’s section.  The ascot and pocket scarf were from another green blazer, that I ripped the lining out of, and made the two pieces.  The shirt and pants were thrift store purchases.  The mustache and smoking pipe came from a costume store.  These two add on’s gave Mr. Green an “old English” look and feel.

Weapon of choice – wrench – sprayed with shiny sliver paint.  Because the bottom of the wrench was made from rubber, the spray paint would not stick, therefore I had to wrap the bottom in tin foil, and respray it.

In the board game, Mrs. White is typically the maid.  However, I wanted to go with more of the movie-version Mrs. White, where she is basically a “black widow.”  Her one stipulation was that she wanted a pillbox hat with a veil.  I made the pillbox hat from a cereal box.  I cut the circle out of the box and then three strips to fit around the outside of the circle.  I glued all together, and then covered the box with old jeans for comfort.  I then used an old black button-up shirt, and covered over the jean… gluing in the veil material in the process.  Underneath, I added two barrettes to hold the hat onto her black wig.  The white strip around the hat came from the same material as her white coat… a bathrobe.

I made the coat using a white bathrobe that I essentially cut in half.  I trimmed the arms up to three-quarter length, and glued all of the arm and bottom edges, so nothing would fray.  On the outside there was an embroidered logo, which I covered with black feathers, and glued on a small robe piece to give the illusion of a pocket.  The dress was a black thrift store dress that originally had a small gold ring in front.  The gold ring was cut out and white material was added to that part and to the bottom of the dress.  Her pearls came from the thrift store, along with her purse, and her lacy black gloves came from a costume store.

Weapon of choice – revolver… this was actually somewhat of a difficult find because a lot of the costume guns are more of a pistol style.  I finally found a foam revolver at a party supply store, and sprayed it the same shiny silver as the other weapons.

I had so, so much fun making these costumes.  Although, I conceptualized and made the costumes, I did regularly ask my friends for input.  I think they came out great!  They were vibrant, and really conveyed who we were and what time period we were from (and we loved being stopped on the street for some photo-ops). 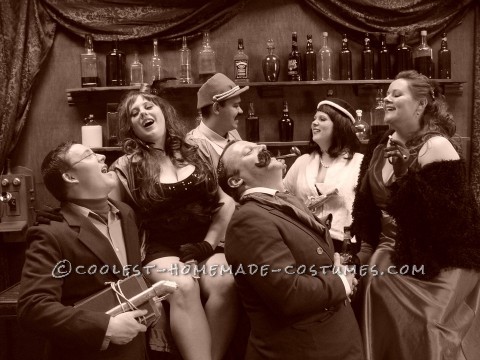 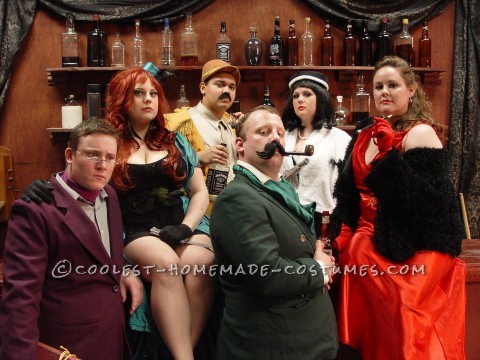 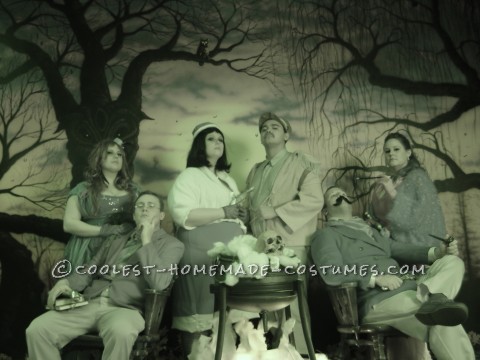 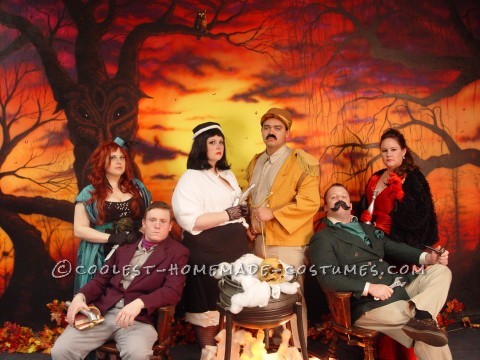 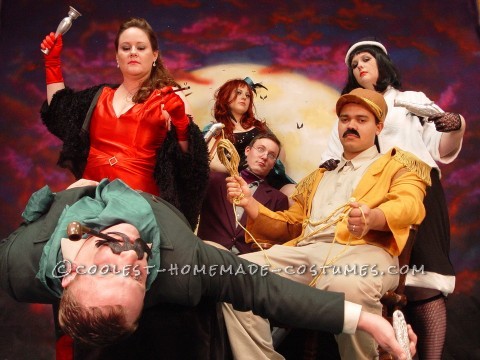 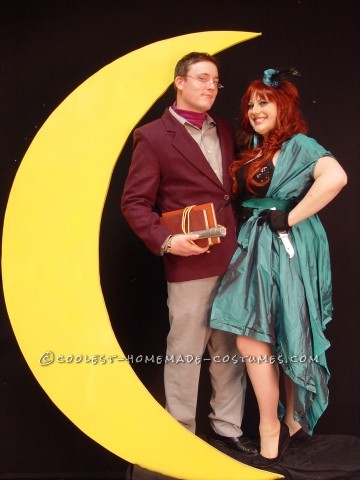 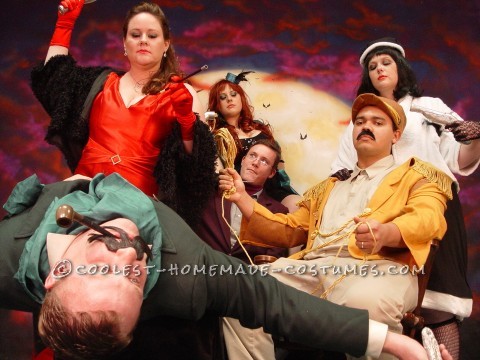 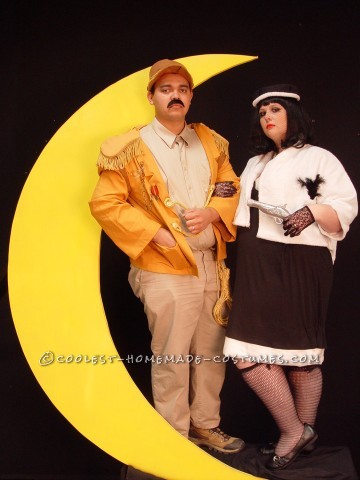 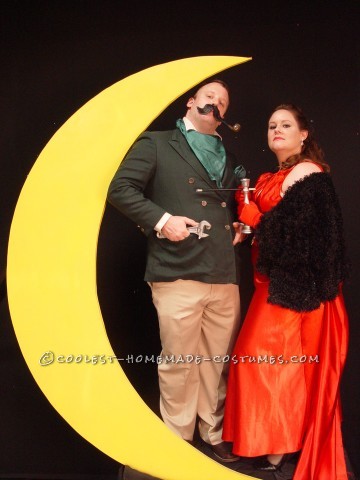