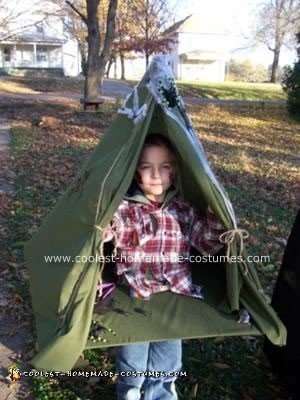 This is our Not-So-Happy Homemade Camping Tent Costume I created for my 7 year old son this year! We got the idea after reading a little about similar ideas using only clothing to get the image but we took it a step further and created the entire tent of doom!

I started with a square piece of poster board and used duct tape to secure pieces of PVC to the poster board making the frame. I cut a hole in the bottom of the poster board just big enough for my kiddo and attached some old suspenders to have a way to hold the tent on him. I stretched fabric in army green around the frame and secured it with some old twine. Then we had fun! We stretched spider webbing over the top. Then with the infestations.

His tent had mice, snakes, tarantulas, roaches, AND if that weren’t enough he had obviously been attacked by some sort of clawed creature as evidenced by his bloody face and ripped up bloody plaid shirt. He also had a big bloody claw print ripped in the side of his tent. I even left extra fabric on the front of the tent so he could untie it and shut it just like a real tent then scream “help!” or “snake!” or whatever as he flung open the tent at a doorstep (you get the idea). We intended to make fake legs to sit in the tent cross-legged and then drape his real legs in black cloth to hide them but we didn’t get around to it.

He got rave reviews for his Homemade Camping Tent Costume none the less!