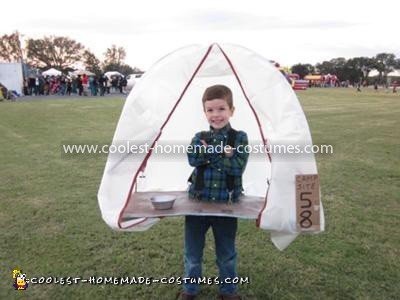 My five-year-old loves to go camping, so I thought it would be fun to create a Homemade Dome Tent Costume for him. He LOVED it.

I started with a cardboard box. I cut the top and bottom flaps off of the box and folded the rest of it flat. That resulted in two layers of cardboard, which helped hold up the tent.

Next I cut a hole where my son would stand. I made a cut from one side of the hole to the back of the cardboard base, creating a flap in the back so it would be easier for him to get in and out. I used duct tape around the edges of the cardboard base to add strength and keep the two layers together.

I had some metallic and some black spray paint left over from some other projects, so I used them to give the base some color as a tent floor.
The poles and the actual tent are the rain fly from our multi-room dome tent. I punched holes in the corners of the base.

I put the end of one pole into one corner, then put the other end in the opposite corner. Repeat for the other pole so they cross in the middle. Then I secured the end of the pole to the bottom of the cardboard base with duct tape, just to be sure.

Last thing – straps. I used wire to create four rings for the straps to clip onto. I took a shoulder strap from a suitcase, and another from a laptop case. The straps went over my son’s shoulders to hold the tent in place.

He definitely stood out in a sea of store-bought superhero and princess costumes! We heard many positive comments. 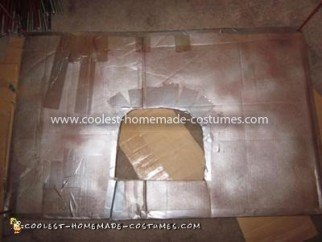 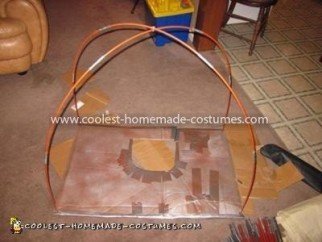 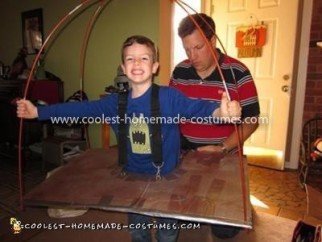