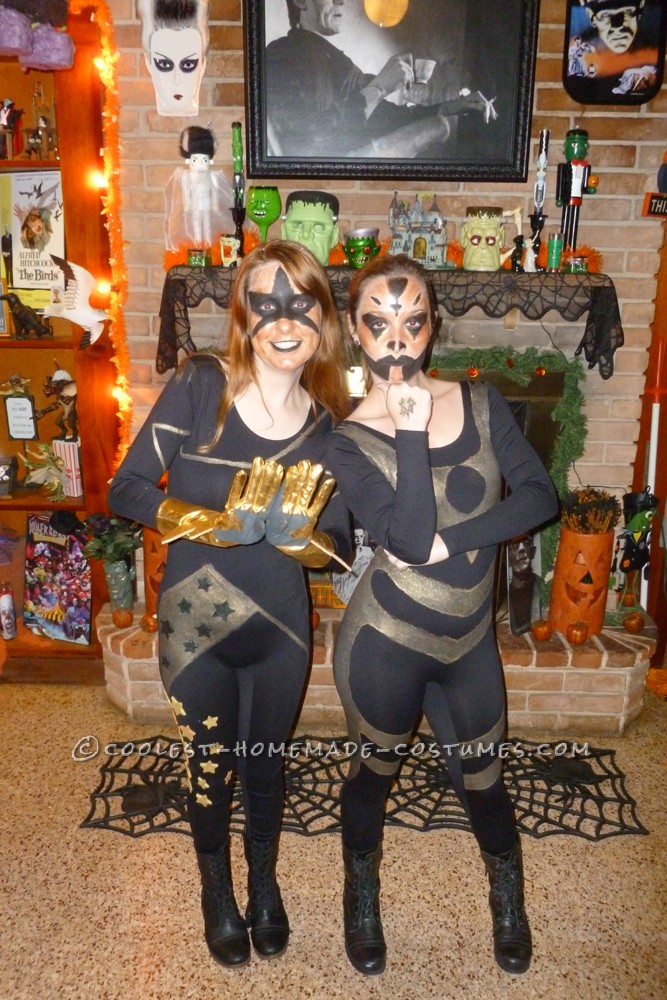 My best friend and I have done a few wrestling couple costumes in the past few years. Yes, we are girls! But it’s so much fun dressing up as male wrestlers. It’s also very funny! We were Macho Man (me) and Hulk Hogan (my friend Teresa) last Halloween (2013), and for Wrestlemania 30 in New Orleans, we were both “mini hulksters.” I was the NWO version (black-and-white), and she was the Hulkamania version (red-and-yellow). Since we look a lot alike and we wore mustaches, it was a big hit!

After, having so much fun doing those couple costumes, we decided to try our hand at Stardust and Goldust because they are so strange, cool, and unique (Tag Team Champions WWE 2014). Making the costumes was somewhat difficult and required multiple trips to Michael’s craft store.

And coincidentally, after we decided to do this Stardust and Goldust couple costume for Halloween, they became the Tag Team Champions. So, I ordered us two Tag Team Championship belts for our costume for the WWE store. I wish I could have convinced my boyfriend to dress as Dusty Rhodes in polka dots, but he wouldn’t do it (that costume would have gone perfectly with Goldust and Stardust because Dusty Rhodes is their father in real life).

Unfortunately, my friend Teresa was sick on Halloween, so all we did was eat out at a restaurant. We didn’t get a chance to enter into any costume contests. If she wasn’t so sick on Halloween night, we would have definitely entered into any that we could find.

Not many people recognized who we were (I guess we didn’t encounter very many wrestling fans that night.) However, one woman did recognize us and said, “Oh my gosh, there’s Goldust and Stardust over there. That’s cool.” So I think we did a decent job, if she was able to recognize who we were at all.

The best part of the whole night with our couple costume was being able to act like Goldust and Stardust. We did their signature entrances with the hissing and the breathing in and the speaking of their names Goldust and Stardust. We touched index fingers (like they do before a match). I took some pictures with the WWE belt I bought around my neck because that’s how Stardust had been wearing it on RAW.

Right before we made our couple costumes, Goldust and Stardust changed the look of their costumes (they came out with the new costumes the night they won the Tag Team Championship). Stardust changed his costume to have more blue on the leg and in the entire outfit. His gloves changed colors completely, and his logo also changed colors. He had silver stars on his leg and not gold. Goldust changed his face makeup to look more like flames. I think he also changed his outfit to look like it had gold flames, instead of random gold lines.

The outfits we created and wore for Halloween (and that you see in these pictures) are based on the original Stardust and Goldust costumes when they first came together as a tag team earlier in 2014 (basically the colors are black and gold for both outfits).

Teresa and I both agree that this is our favorite couple costume that we’ve made so far. I’m very proud that we did not buy many elements of the costume. They now sell Goldust and Stardust masks in the WWE Shop online, and they also sell Stardust’s gloves. But we actually painted our faces, and I painted my gloves instead of buying some already made. We are thinking about wearing our costumes to RAW the next time it comes to town! 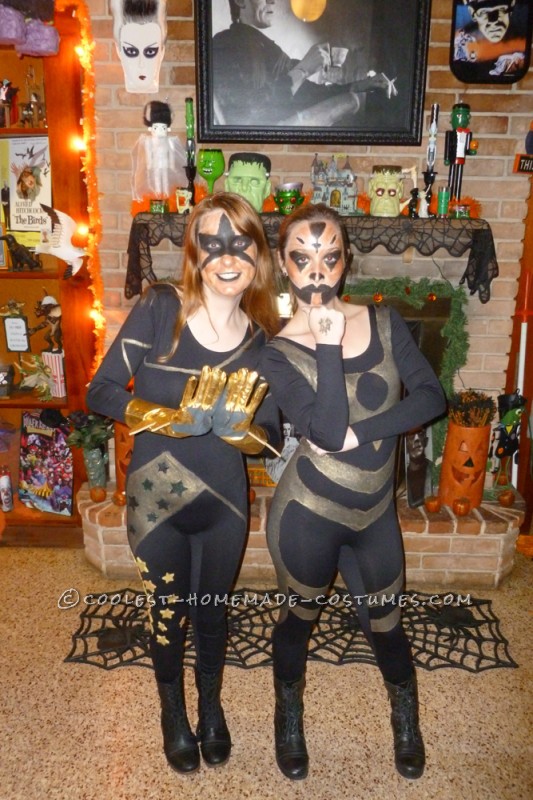 Initial Supplies and the Gloves for Our Couple Costume

We started off our couple costume with plain black unitards from a local dance/costume store (they were out of pleather unitards, so we had to get nylon/spandex ones, Capezio brand). I also bought gold gloves from the costume shop as well because Stardust has special gold gloves with a black star on them). Then we purchased gold and black fabric paint and black paint pens from Michael’s as well as iron-on printer sheets for dark fabrics. This was our first trip buying supplies. There were about two or three more trips to continue to obtain needed materials.

For Stardust, the first thing I began working on was the gloves. I drew one half of a black star on one glove, and the other half of the star on the other glove. When you hold the gloves/your hands together, it forms a star. It took more than one black fabric paint pen to color in the star on the gloves. On a later trip to Michael’s, I purchased two gold-glitter foam boards. I glued the two together and cut out comet/wing-shaped designs to glue onto the sides of the gloves (glued with fabric glue)

Goldust did not require special gloves. So my friend did not have to worry about that. 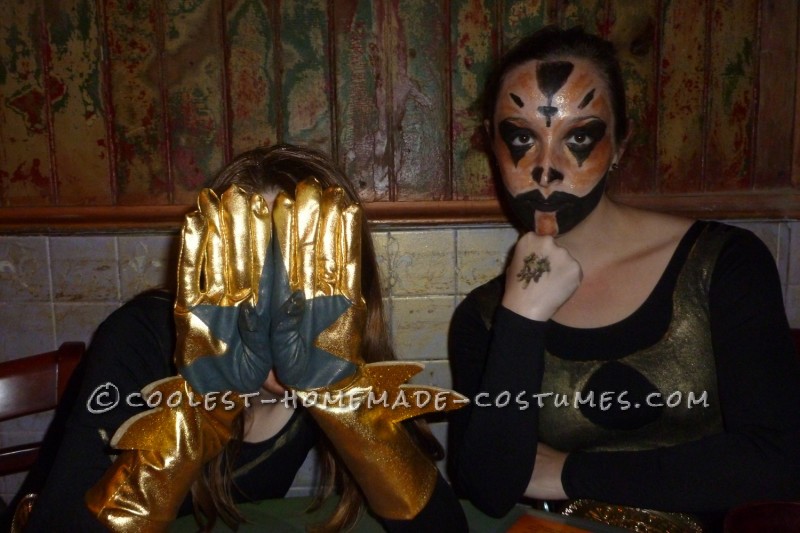 Stardust Gloves with Goldust sitting next to me

Painting the Designs onto the Coupl Costume

Both Stardust and Goldust have elaborate designs on their costumes. The actual wrestlers seem to have pleather-type costumes with a high neck with gold designs. We had nylon/spandex unitards with a scoop neck. So it was hard to adjust the designs for the scoop neck.

My best friend Teresa was better at sketching out the designs. She helped me with my outfit by drawing the design on it for me. She just looked at a picture of Stardust and drew it with gold fabric paint on the outfit by eye. The outfit design for Stardust is a weirdly shaped star. It is kind of long and narrow. I basically wore the unitard while my friend painted a thin gold line where the star should be. When I lowered my arms, it was supposed to connect and look like a narrow star. I think it came out pretty good. I later went back over the thin line that she drew and made it thicker with more fabric paint. The bottom half of the Stardust costume with stars on one leg is more elaborate and is discussed in the next step.

The Goldust outfit design consisted of random, wavy, thick lines and patterns/bands that went across the body of the unitard and onto the arms and legs. Teresa also drew this design by eye (just looking at a picture and estimating where each line went)

Each outfit got double coats of gold fabric paint, which we applied with fabric paint brushes that we bought from Michael’s.

We also printed out each wrestler’s logo from the internet using iron-on printer sheets for dark fabrics from Michael’s. Goldust’s logo was really hard for me to find on Google. But I finally found one (I don’t think it’s his current logo, however.) Stardust’s logo was very easy to find. I ironed on the logos to the backs of our costumes. 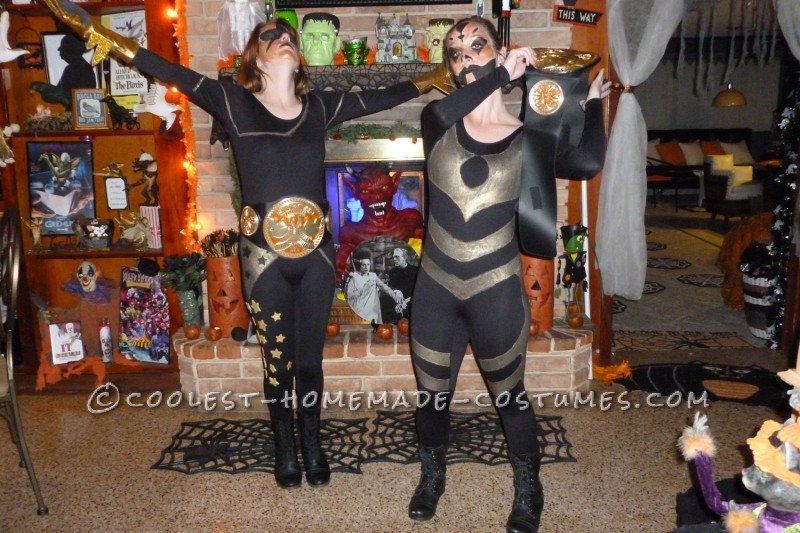 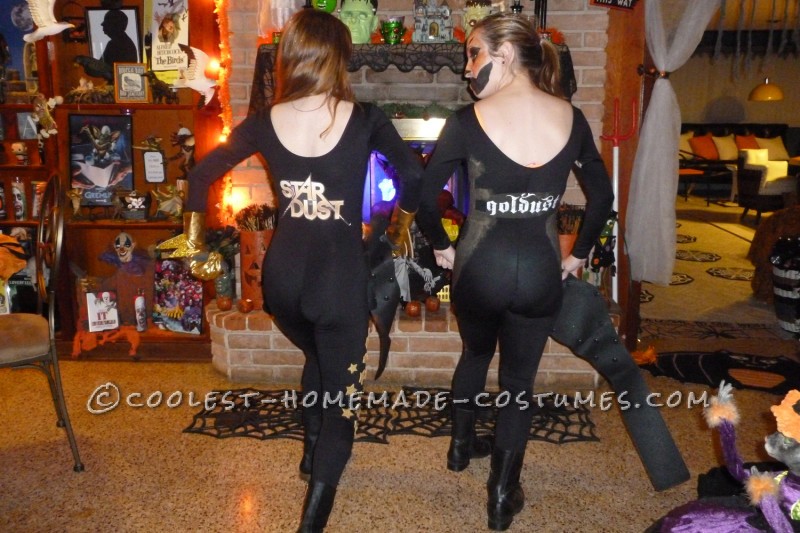 Wrestler Logos on Back of Outfit

Stardust’s costume consists of one leg full of stars. There’s a gold section with black stars. Then running down and outside of the gold section is gold stars (on top of the black fabric.)

This required another trip to Michael’s. I bought star-shaped 3-D stickers so I wouldn’t have to hand-draw numerous stars onto the costume. They came in an assortment of glittery-colors and sizes. However, I had to color the lighter colored ones black. It took two or three coats of a black permanent marker. Some other stars I spray painted gold with metallic gold spray paint. I then glued them to the costume in the appropriate places with fabric glue (after peeling the paper sticker sheets from the bottom of the stars)

In the Intro Picture, you can see the entire leg.

For shoes, I already had a pair of combat boots that I purchased a year or two ago from Target. My friend Teresa (Goldust) just wore regular black boots she had already. 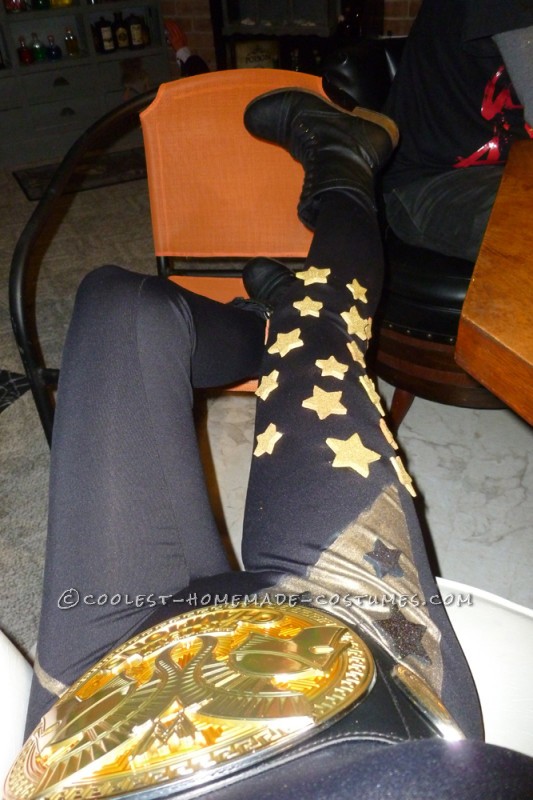 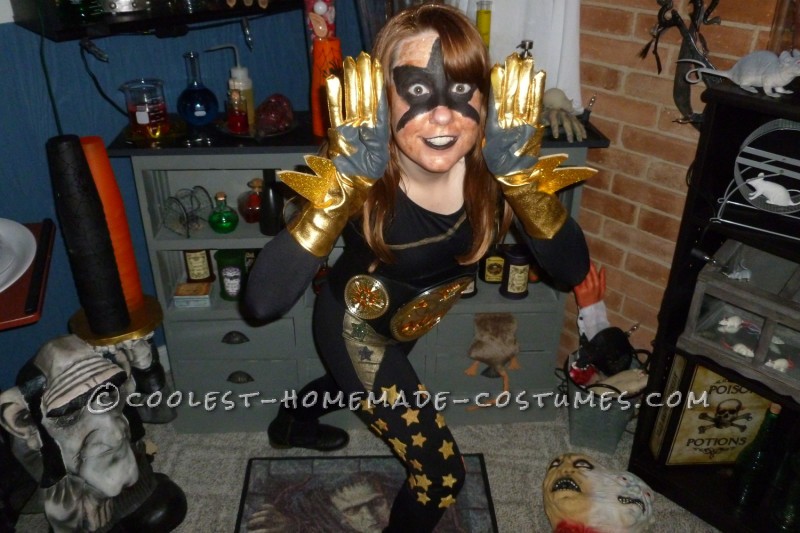 Although we spent a lot of time making the couple costumes, the face makeup is actually the most important part of the couple costume. Unfortunately, we waited until the last minute to try to find the makeup! On Halloween night, we went to numerous stores, and all of them were out of gold and even black face paint. My friend Teresa was creative, and purchased a gold eye-makeup pen (with a thick tip) and luckily, I already had a tube of black face paint that I found buried in my costume box.

She helped me trace the outline of my narrow star on my face and I colored it in with black face paint. She and I both used the gold eye-makeup pen to color our faces. Goldust’s face design is random black patterns, so Teresa drew that on her face by looking at a picture as a reference/guide. I think both really came out well, but I wish we would have thought ahead and actually bought gold face paint. My “gold” paint on my face looked a little too bronze. We also sprayed our hair with gold glitter hair spray. She wore her hair up as Golddust, while I wore mine down. However, at the end of the night I did take a few pictures with my hair up (with a creepy smile and wide-open eyes just like the real Stardust has) to try to get the full effect of the makeup. 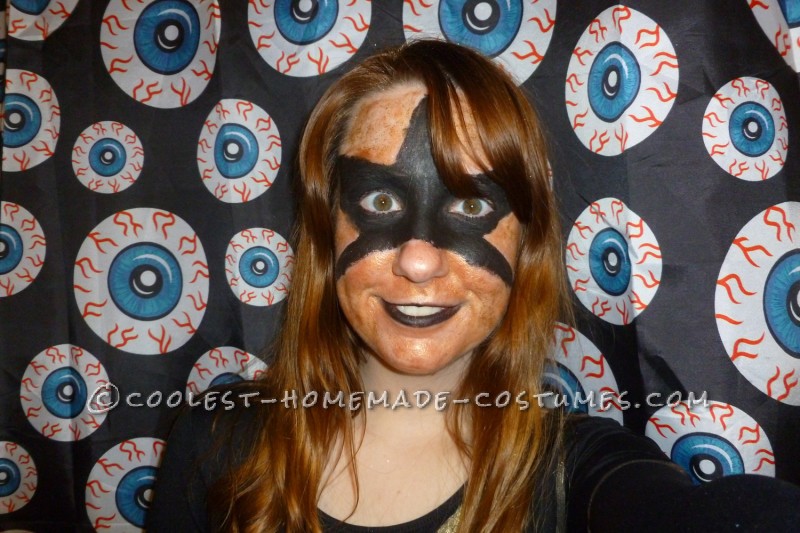 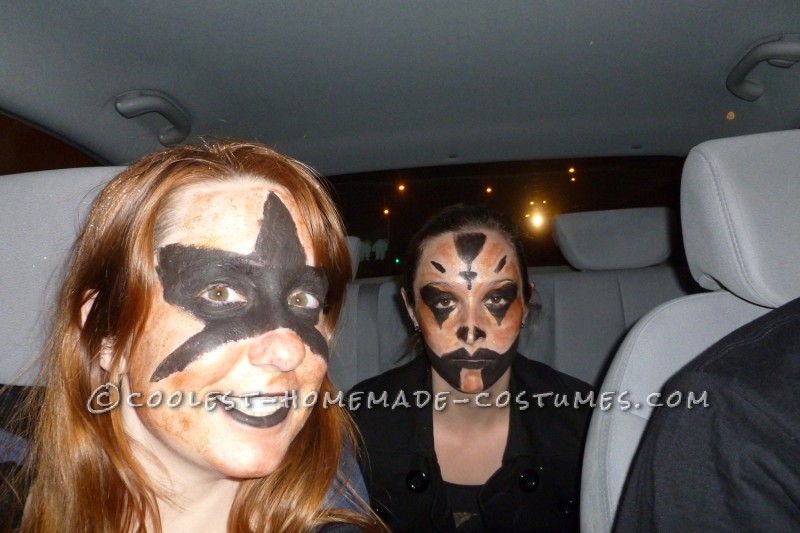 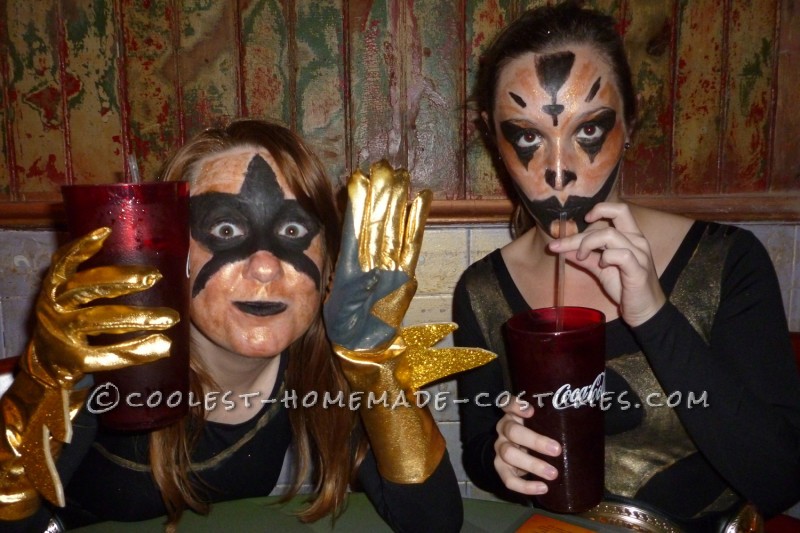 Stardust and Goldust are Thirsty 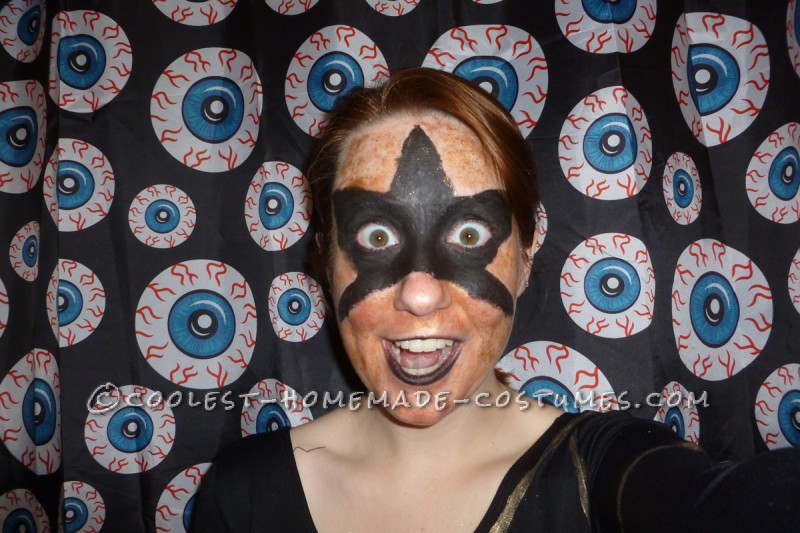