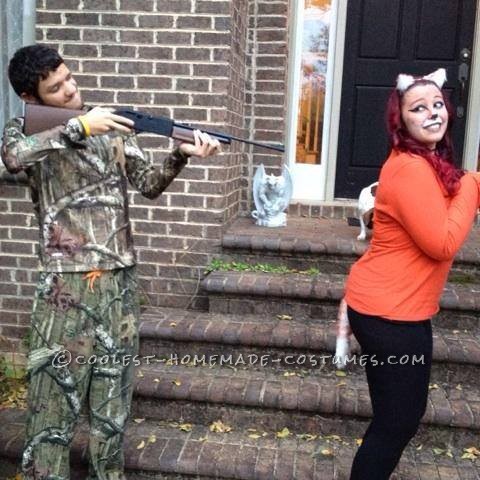 After being together for over a year, we wanted to try something non-scary for Halloween this year.  After debating about a couples costume for our second Halloween together we finally settled on me being a fox and him being a hunter.  Really you could be any animal, but I chose to be a fox since my hair is currently dyed red.  Originally my younger sister was going to be a hound dog to complete our look but that ended up not happening. (It’s still a good idea for a three person costume!) Putting our costume together was super easy, took very little time, and was fairly cheap.

To re-create our look you will need:

For my look:  My grandmother made my ears with white faux fur, orange paint, and pinned them to a head band.   The tail was made from the same materials and was pinned to my pants by a safety pin. However fox like ears and tails can be purchased at a Halloween store. I wore a cheap solid orange shirt from Wal-Mart with black leggings and combat boots.  Then, I painted my face with using a face painting kit I found at Wal-Mart and used a picture for reference.

For his look:   His look was super easy!  We found a camouflage shirt and pants at Wal-Mart and he wore black shoes. Ta-da his look was finished!  To add a little more to the outfit he carried a fake gun around that he happened to have.  To add even more to the look you could always sponge on green/ black/ brown face paint to mimic camouflage and bring your dog along!

Like I said before, I was a fox because of my red hair. This costume could also be easily re-created as a deer, squirrel, or rabbit by making or buying appropriate ears/ tail and a color coordinating outfit.

This outfit cost us around $35 and for anyone else it would cost less than $50 if you used things you already had around the house.  We got a lot of complements and brownie points for creativity.  Can’t wait to dress up again next year! 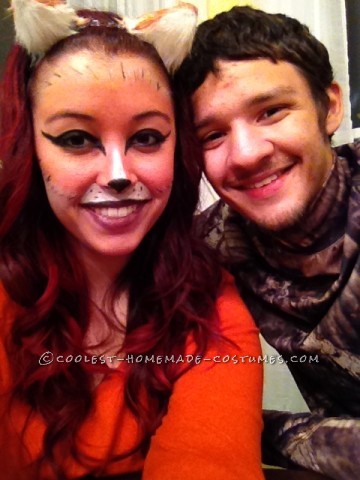 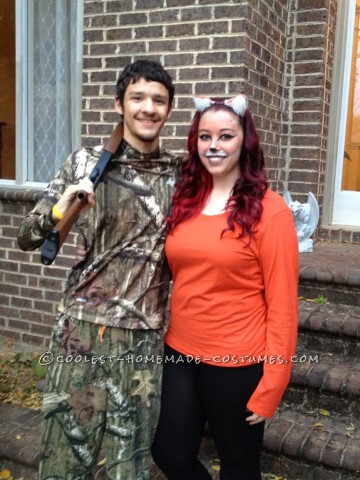 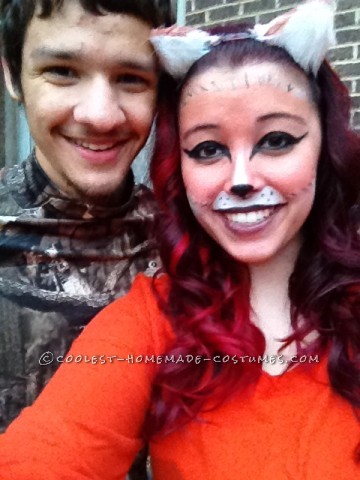