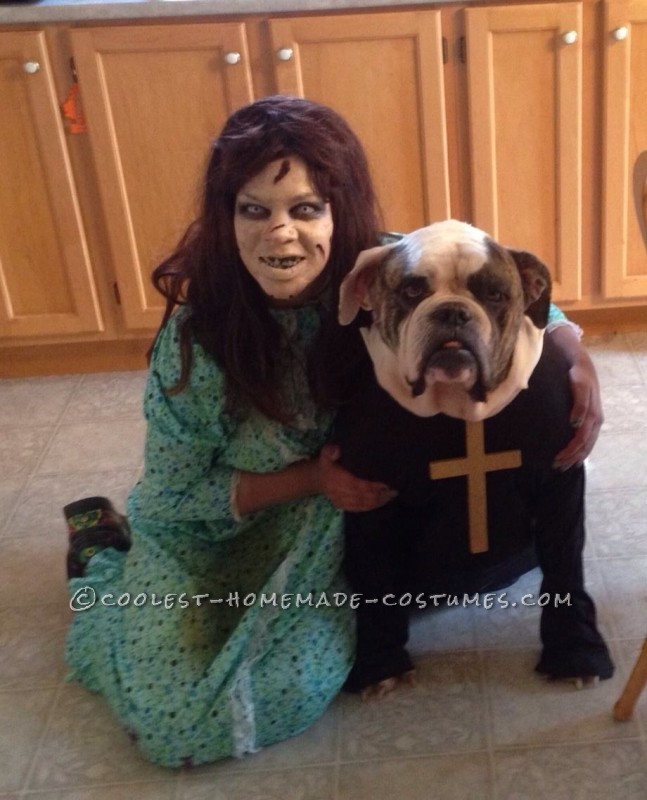 This was the first year that I had no clue what to be for Halloween, i wanted to spook the pants off people so I got to thinking what was the scariest movie that really messed with people…..the exorcist. I found the basic cosume at a local Halloween shop (the only one on this small island) and it came with the gown and the wig BONUS. Then I got me some white contact lenses for that ‘possessed’ look. I used liquid latex and a exacto knife to make the cuts and filled them in with clotting blood. The most difficult part was making myself look white as I am black. So after much thought I went out and bought some foundation makeup (the mousse kind) I had to put like 4 layers on to make it cover up my skin. When the foundation hit parts of the latex it kind of cracked it so the was a bonus cool effect (expecially helped for the lips) I added some one ply tissue paper onto my lips to make them look more puffy in spots. THen I just put some black face paint around the eyes to make them more sunken in. The reactions this costume got were awesome. People who knew me forever had no clue who I was at the party until I spoke. Some people would not talk to me (although I was trying to make conversations as awkward as possible at times, lol) I even hit up the local stores on Halloween just to creep on the customers (and I needed candy for the kids) Kids just held out their candy bags as far away from me as possible. It was great. My loyal dog companion there just had a regular adult priest costume and I tied a cross around his neck, i find him barking at trick or treaters is less threatning when hes dressed up so I always try to do a duo costume for me and him on Halloween.