I originally wanted to do Han Solo and the Slave Princess Leia with my dog being Princess Leia in a little gold bikini.  This was going to be for a Halloween party at my home.  But then we decided to go out instead so I had to scrap the princess puppy.  I found the white shirt, black vest, brown pants, and black boots in my closet, so most of the costume was done in about 5 minutes.

The hardest part was the holster.  I bought a dollar stone gun and put a brown belt through the slots.  Then I cut a few slots through a brown suede strap off of a purse from Goodwill, put that through another brown belt, and cut off the extra ends.  Then the only thing left was to use fabric paint to paint yellow stripes on the pants.  Some pictures showed blue pants with red stripes and some showed brown pants with yellow stripes, so do whatever you have.

I got a lot of compliments on this one  (if you want to be sexy Han Solo, I suggest wearing less clothes and calling yourself Han Holo). 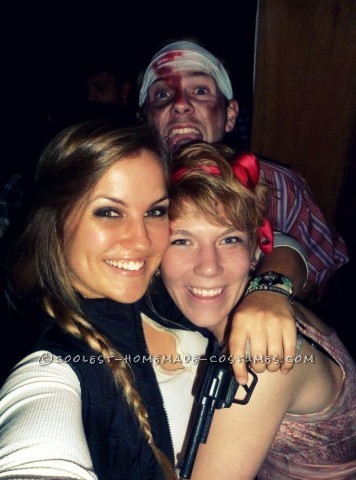