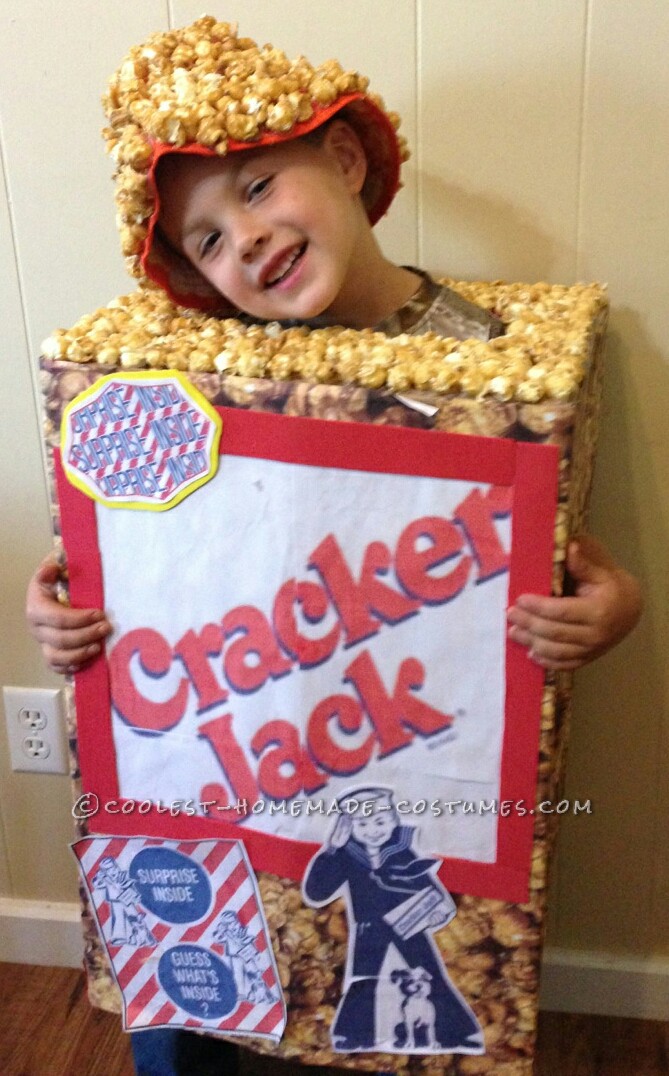 Preston loves baseball and when a local fair costume contest was announced he was bummed out that the theme was not sports this year. The annual town fair has a kids costume parade that awards ribbons based on the theme. This year theme was “Under the Big Top” circus carnival theme.

Preston’s mom with the help of her friends thought that carnival food would go great. Preston yelled I can be cracker jacks because they have those at baseball games and the circus. So the costume making began. We found a cardboard box roughly the same size of Preston at the local grocery store. Hint go  during times they are unloading trucks (usually early morning or late night) to shop for the perfect size box. Cut a rectangular hole large enough for head to go thru. And two holes on each side for the arms with a box cutter.

We went online and blew up actual pictures of caramel popcorn. Glued the sheets together to cover all side of box. Excluding the very top. Blew up actual cracker jack logos, sailor boy, surprise inside, AND Nutrition lable pictures. Attached to sides of box and outlined them with colored foam sheets to give a 3D dimension.Then took boxes of real caramel popcorn and hot glued them to the top section. It took about 5 regular size boxes (found at dollar store very inexpensive). We sprayed clear coat on top just so it was not so sticky. Took a sun/fishing hat and hot glued more caramel popcorn on the hat. Then place box over his head and added the hat.

Preston loved it and loved that it still had a baseball theme.  During the parade he handed out small boxes of real cracker jacks and continued to sing ” take me out to the ball game buy me some peanuts and cracker jacks I don’t care if we ever go back”