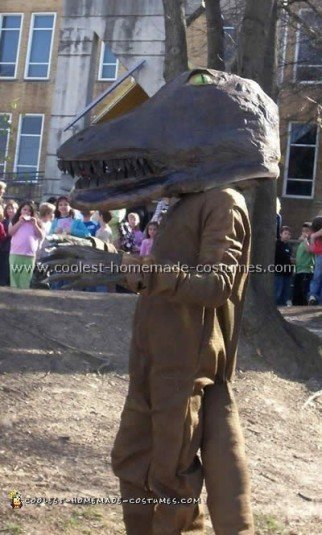 I created this dinosaur costume to entertain the children who come to the puppetry arts museum. I got the idea for this costume for the many dinosaur books I have read and by watching the talented crafts people at my job.

In the beginning I planned to only design a dinosaur head; however that turned into a full suit including hands and feet.

Basically the head is a chicken wire frame covered with cheesecloth and butchers paper, layers all held together with a mixture of titebond glue and liquid wallpaper paste. The result of using such a formula are amazing .Yes its messy but you will create a an extremely strong head that will last a long time .I chose chicken wire as the base because it gave me more control over how the head would turn out and I could make changes to the design up until I started to add the paper and cheesecloth.

The basic head shape of the dinosaur costume and lower jaw are separate because I wanted to vary the opening of the mouth.

The lower jaw is attached to the head with piano. Then, the teeth and tongue is made of urethane foam which can be purchased at most craft stores.

The eyes are made from green hollow plastic Easter eggs which I am sure everybody has somewhere in the house. The eggs cut long ways on the band saw to create the basic eye. And the pupils are strips of packing tape painted black the veins are made from painted fishing line.

The head is finished with a spray paint called woodland brown that I brought at Wal-Mart’s for three dollars a can.

The head is well balanced. It is very light for its size; it has a construction helmet mounted inside with a chinstrap to keep it from falling off if you bend over. At the bottom of the head I added a rim of urethane tubing as a cushion where the head sits on my shoulders. I

If you plan correctly you should be able to see out the mask thru the mouth this is why its important to try on the wire frame and mark the spots you don’t want to cover with cheesecloth and paper. Finally, you can use spray polyurethane to make the head really standout and give it a wet look.

The hands of the dinosaur costume are made from simple brown garden gloves with the fingertips cut off. Cut and shape talons from urethane foam and coat them with construction adhesive before inserting them in the opening. Add cloths line for the leaders and string for the veins and cover with cheesecloth.

The feet are the most challenging part of the costume. Choose a pair of tennis shoes that are one size larger than you wear so the can go on and off easy. Carve some urethane talons and attach to the toes of the shoes with construction adhesive once again the leaders are clothes line and the veins are string cover with layers of cheesecloth painted with construction adhesive this will take some experimenting. Finish with the same woodland brown spray paint.

The bodysuit was the most fun part of this project. I started by choosing heavy upholstery material with a pattern like reptile scales. It was not the color I wanted but material can be painted or dyed if you like. It took four yards of material to make my suit. All of the sewing was done by hand but a machine would make a big difference.

The tail is made of the same material stuffed with pillow batting and sewed to the main body. A zipper was added which turned out to be more reliable than the snaps I started with. When sewing the suit reinforce the crotch, shoulders and tail. Due to these areas taking a lot of stress.

Especially relevant is to remember there are no set rules, experiment have fun. 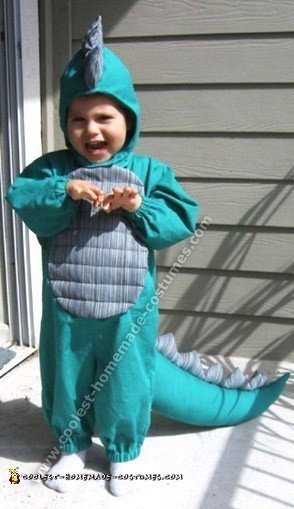 This size was too big after all, so hopefully it will be next year’s costume, too! My son had a blast being in his costume! He even willingly wore the hood. My friend gave me the green fabric and I bought the striped fabric for the spikes and belly.

The pattern for this costume isn’t very difficult; I finished it in 3 weeks. Also, this costume was fun to make! I overstuffed the spikes, which made sewing it on a small battle, but it worked out. Total Spent: $7 (I had free fabric)

My son is really into Dinosaurs and wanted to be a Velociraptor. So with a lot of imagination I came up with this costume. The head is made from plastic canvas that I cut and sewed together to get the basic shape of the dinosaur costume head. I then used paper mache to form the eye sockets and covered the entire head in cut up t-shirts.

Using foam I created the tongue, teeth and mouth. The dinosaur costume suit is made from long johns. Then I cut and sculpted the chest and stomach muscles from foam and sewed it into the shirt.

The tail is made of foam covered in t-shirts. It is attached to my sons waist with a belt.

The costume feet are made from foam attached to an old pair of tennis shoes. The foam was then sculted into the toes and talons.

In order to complete the suit I painted it using a sea sponge. Due to the fact that I did not use any patterns and could not find any existing Velociraptor costumes to reference, this dinosaur costume was created by pure imagination.

In conclusion, it took about 2 months to make and cost about 50 dollars. 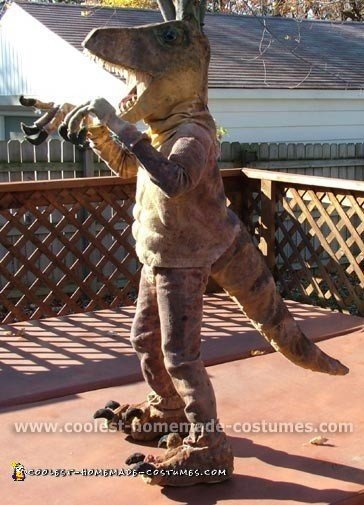 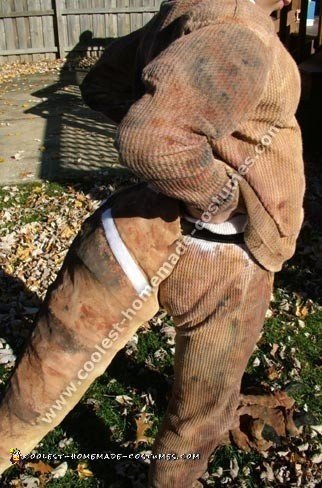 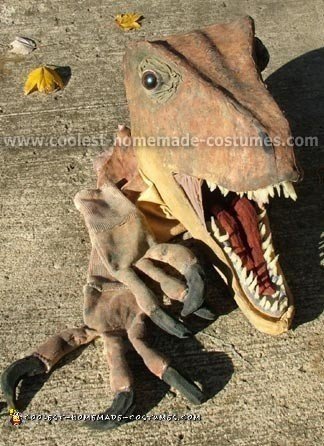