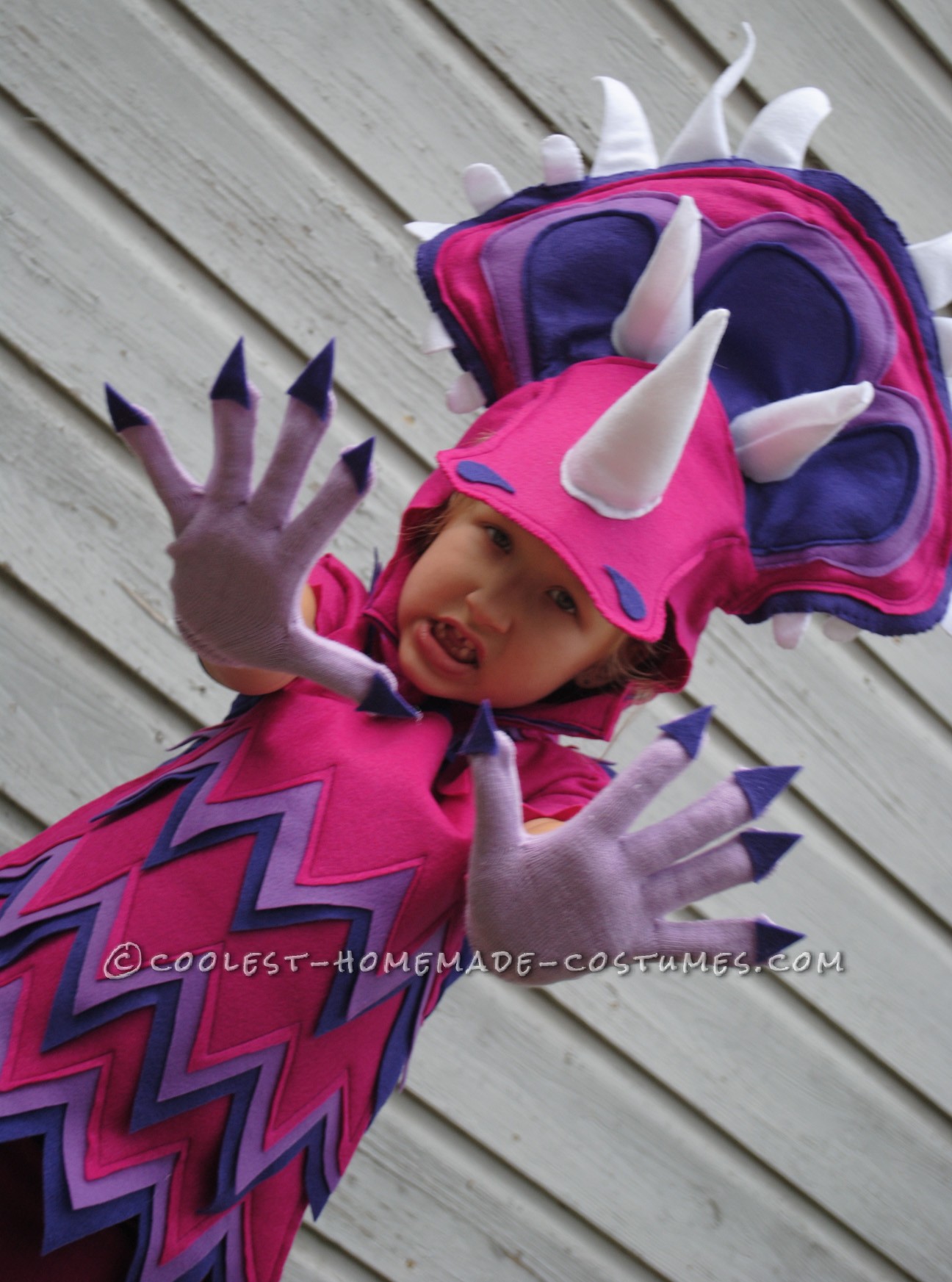 This pink and purple Dinosaur costume is made almost entirely of felt. This costume was inspired by the Triceratops in the TV show Dinosaur Train. The very first step was to make a sketch of the dinosaur costume with colored markers to test the color choices and map out a plan for the overall look of the costume. This particular costume was monochromatic in color scheme, but this Triceratops could be made in any color scheme! This Triceratops costume the first of the dinosaur species I have attempted, but I am planning to try to design and sew an Ankylosaurus costume next and maybe eventually sew and design more different kinds of dinosaur costumes.

The body of the Triceratops costume is based around a simple purple cotton t-shirt. I cut out jaggedly layers from 3 colors of felt to create the layered shag look. The three colors used in this costume are Fuschia, Lilac and Purple. First, I  sewed the layers together on my sewing machine. Next I tacked the layers down with hot glue and sewing pins, but careful to use as little glue as possible because a sewing machine cannot sew through hot glue  (hot glue is a good trick to use for hard to pin areas of the costume). I generally hot glue a few dots to tack the costume pieces into place and then sew the pieces to reinforce the costumes durability.

The tail shape was cut out of two pieces of felt and jaggedly multicolored layers were added to the top of the tail similar to the jaggedly layers added to the tshirt. The tail was sewn in this order, top layers sewn layer by layer over the felt tail piece, triangle spikes added to the tail, and then the finished top tail piece was sewn to another matching back piece, and last, the tail was stuffed with cotton and sewn closed at the top. The spikes of the costume were cut out of a thin cardboard (for stiffness) and then covered with purple felt and sewn around the edges. I then bent the very bottom of the cardboard triangle about 3/4 of an inch to form a “stand” for the triangle.

The head is the most difficult and is made in three sections, first I made the crest piece out of several layers of coordinating felt fabric colors, and I sewed all the colored felt pieces into place. The Crest was designed to attach to a basic hood pattern shape that I sewed out of felt, and the entire crest was wired on the inside with 12 gauge aluminum wire. The dinosaur snout is a separate piece made of felt covered cardboard. Lastly, the final details, the horns were made of rolled up felt. in all different shapes for texture and interest.

A dinosaur costume is not complete without Dinosaur claws, of course! I bought lilac knitted gloves and glued purple claws to the tips of the fingers. Then the costume was complete! My six year old modeled the costume. She thinks it is so much fun to play dress up in animal costumes and run around the yard pretending to roar like a mighty Dinosaur. 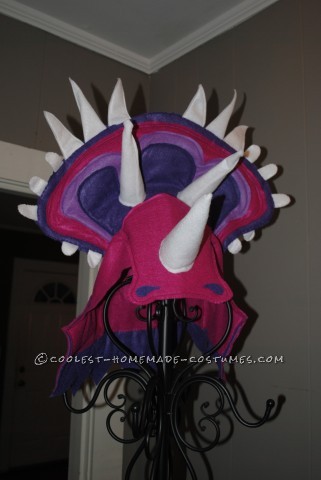 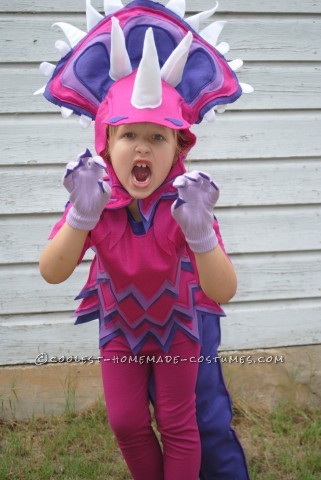 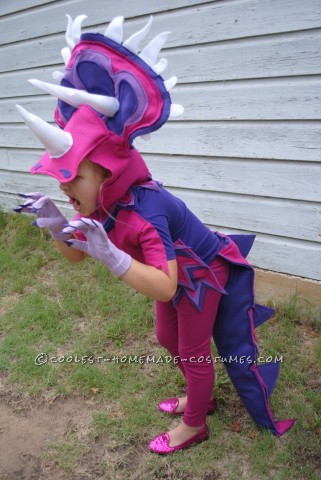 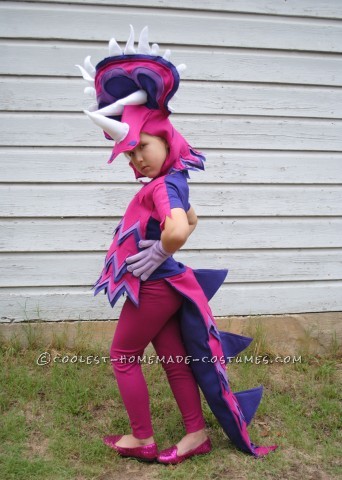 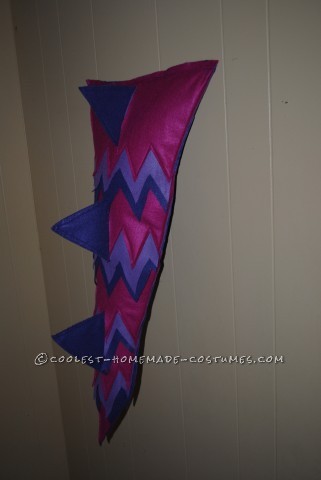 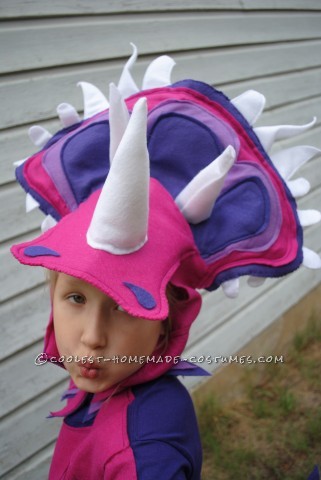 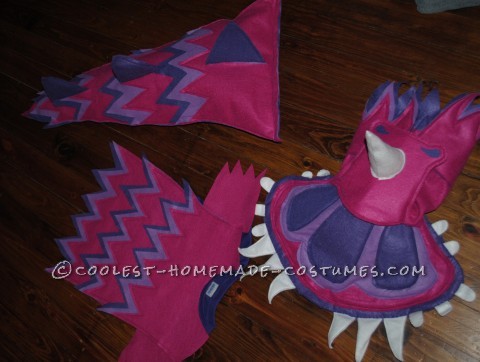 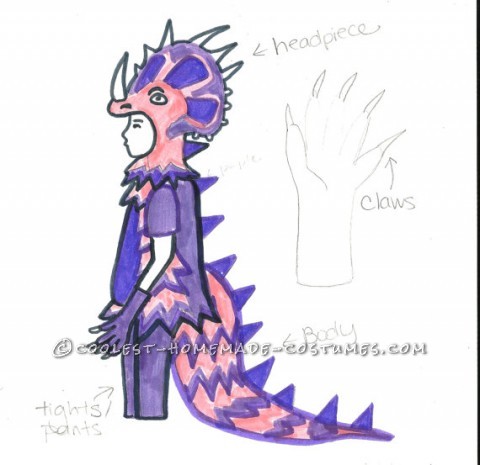 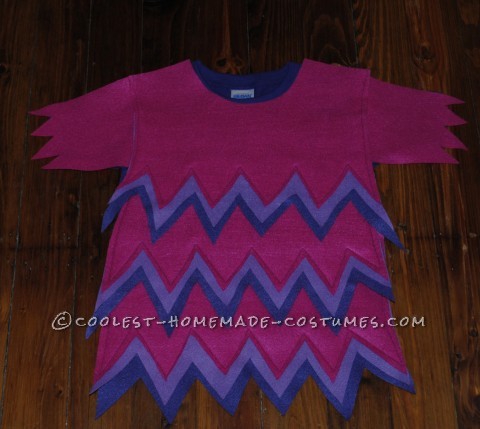