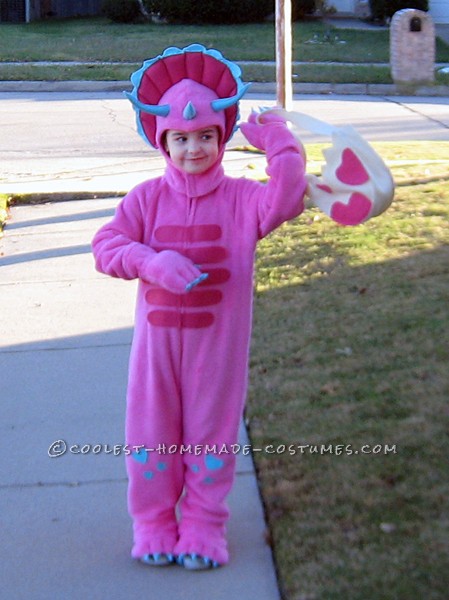 My niece is a real girly girl most of the time, but she also likes bugs and dinosaurs. When she saw a pattern I had for dinosaur costumes (Simplicity 1765) she insisted that we scrap the rainbow princess idea she had originally presented and go with a triceratops. And it had to be pink.

The suit is made from a really soft, stretchy, drapey pink cuddle fabric, sort of like a micro fleece. I chose that over regular fleece (which is thicker) so that she could comfortably wear the costume no matter the weather since it can be unpredictable here in TX. The accents were made of felt and glued on with fabric glue. I actually top stitched all of the spots first before gluing them down so they could still look sewn on.

The hat was the hardest part since the felt crest needed to be hand stitched on and it was difficult to line everything up and keep it in place while sewing. Luckily I found an appropriately sized glass head in my closet (why do I have that?) to wear the hat while I sewed so it made the process go much more smoothly. The dinosaur egg trick-or-treat bag was designed by me and sewn entirely out of felt. It was a little smaller than I wanted, but I didn’t have time to remake it.

In the end, my niece LOVED it and didn’t even complain about having to wear the hat or the gloves or anything. Normally she’s really picky about that sort of thing, but I guess she thought it was worth it. Her favorite part was the tail which she happily swung when she walked. She got tons of compliments and tons of candy on Halloween, and she even won a prize in the neighborhood’s costume contest. All in all, I’d say it was a hit. 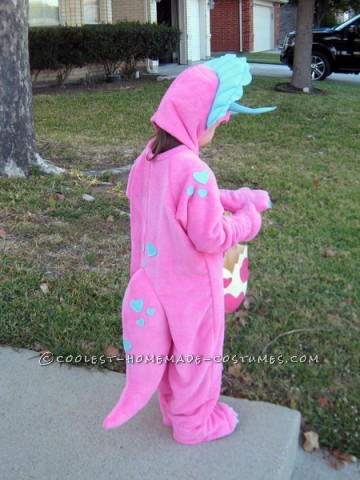 Most Unique Dinosaur Costume Ever