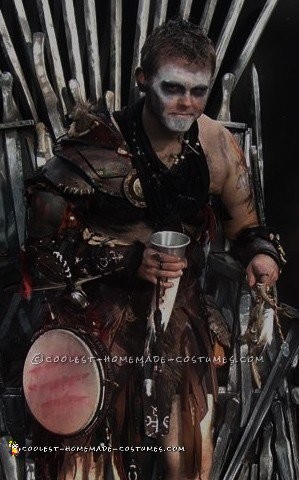 Behold! This is my fantasy shaman costume that I wore to the 2014 Bay Area Renaissance Festival. This is the second costume that I’ve put together.

What is it made from?

This costume was made almost entirely of scraps and scrounged items. The leather armor is somewhat hardened (through boiling) and backed with fake fur, so it actually does offer a good deal of impact protection. There is a belt with attached leather panels covering the thighs, a baldric with ample right shoulder coverage using articulated leather panels. The upper right arm is covered with more leather, and the elbow has a strap-down cap with a large roundel for protecting the joint. All of this was accessorized with lots of shredded brown and red fabric that I made look dirty by smearing it with brown shoe polish. And dirt.

Both bracers are the same basic design, doubled in thickness to be about 1/2” of leather. These are backed with more fur and are substantially thick.

Beneath the armor I wore body paint and a four-paneled “loincloth/thing” that ties around the stomach.

The costume was accessorized with a hand-sewn neck wrap and a necklace of wooden beads ox teeth and chicken bones. The props that I carried were a handmade wassail horn (bought at last year’s fair) that I decorated and made a sling for, and a wooden shamanic hoop drum that I painted and adorned with leather, feathers, beads and bones. 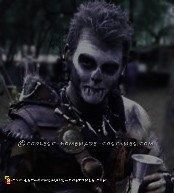 How did I make it?

I have a few years of experience with leather working, so this wasn’t all that hard. The good thing about making a barbarian, shaman, witch doctor-type costume is that the work looks better by being simple. I did tool a few small parts of the leather, but not much at all.

I got most of my leather scraps from the craft store and cobbled them together either with brass rivets or by stitching them with thick leather cord. Just punch holes along the seams and thread away!

The leather was both dyed and painted numerous times. There are at least four dye coats and ten coats of paint on the bracers alone. I used RIT bottle dye; Wine, Dark Brown and Black. With leather, you paint it on with a brush…don’t make a dye bath! The paint colors that I used were gold leaf with black over top, and white and deep red for detailing. The layering and distressing adds to the authenticity of the costume so it’s the one step I never skimp on. On most of the leather pieces, I cut “battle damage” in with a razor blade and painted the cuts to look like deep gouges.

The loincloth was a yard of black cotton cloth that I cut into four panels. I put leather-reinforced holes around the top and threaded it all together with the leather cord that ties around the waist. The designs and hand prints were smeared on (by hand, obviously!) white fabric paint.

The drum head was painted with leather dye and I wrapped the hoop with leather scraps. The sling was made from a braid of leather cord.

I got chicken bones by ordering a pile of chicken wings (another bonus to this costume) and saving the bones. At home, I boiled them for 30 minutes, then sloughed off all of the meat, tendons and cartilage. Then I soaked them in bleach for 30 minutes before letting them air dry (this sanitizes them as well as making them white. They’re full of nasty germs otherwise, and when you start licking your necklace, you don’t want to get sick.)

The neck wrap was an old black shirt that I ripped up. I used white embroidery floss to sew big fake stitches all over it.

When we first arrived.

What happened when I wore it?

First off, when I finally got a chance to go to the Ren Fair and debut the costume, I was halfway through a bout of bronchitis. I went anyway, but the day was really starting off on the wrong foot! (Spoiler: I still had a great time!) Anyway, because of the sickness, I left some of the costume at home just because I didn’t feel like taking the trouble to mess with it. I had made some simple leather shoes and shin armor, but I said “bah, I’ll just walk around barefoot. I’m sick.”

After we trekked through the parking lot to get to the gate at the fair, the girl at the ticket booth told me I had to wear shoes to get it. Apparently, this was the first year of changing some rules and they didn’t bother to update the website. So I hiked back out to the car and put on a pair of black flip flops from Target. Then when I got back to the gate, a different girl told me I had to put a shirt on because I couldn’t show my nipples. Another new rule that I was supposed to psychically know. I only had a Converse t-shirt in the car, and I didn’t want to ruin my look that much. So I went back to the car…again…and painted my chest red and black with body paint. I did this alone and with the car window as a (bad) mirror.

That’s why I didn’t realize that it looked like I’d painted a red and black mermaid bra on myself. I got a lot of looks and laughs on the way back to the gate (which I smiled and waved back to…who cares when you have that much face paint on, right?) It wasn’t until I found my girlfriend that she pointed out how ridiculous the paint bra looked. I fixed it by smearing the rest of my paint pretty much everywhere.

I got a lot of compliments on this costume that day. We got the most laughs when parents would point me out to their little kids and they would be half terrified until I smiled and waved (at which point they would just look really confused.)

Apparently, the gods also favored my struggle in the face of the people at the gate. They sent a rainstorm that both washed away my last-minute body paint mess and created a mud rut so deep that it took my shoes like quicksand. I was happy. 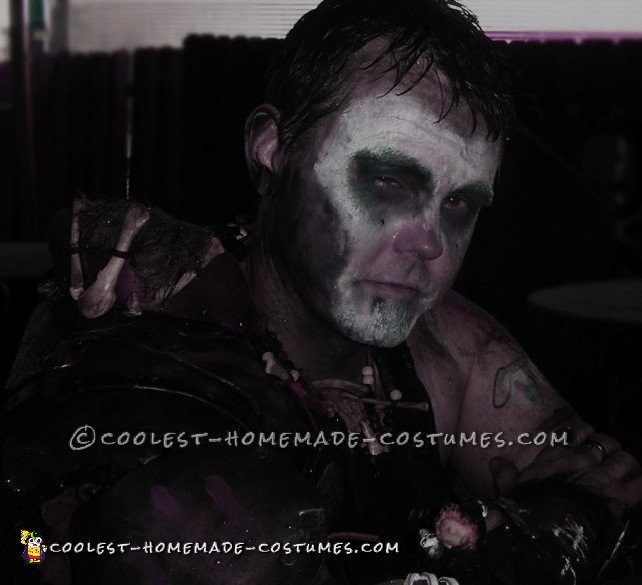 Details of the costume…and my face after the storm flooded the fair.

After the rain…and the mead…

If I win any prize money, I’m putting it back into my costuming! I need to remake a few pieces of this costume that were damaged in the rain storm. I also want to take off the belt and baldric and reuse the shoulder/arm for next year’s costume. I have two possible ideas: fully armored barbarian (I’ll just beef up the leatherwork) or Goblin shaman. If I go with the goblin, it will require full body painting and a half-face prosthetic, fake ears and teeth.

I’d love to do either one…I am only 5’7” though so I think a goblin might fit my size better than barbarian. Vote for me, make me a winner and tell me what you want me to do next year! 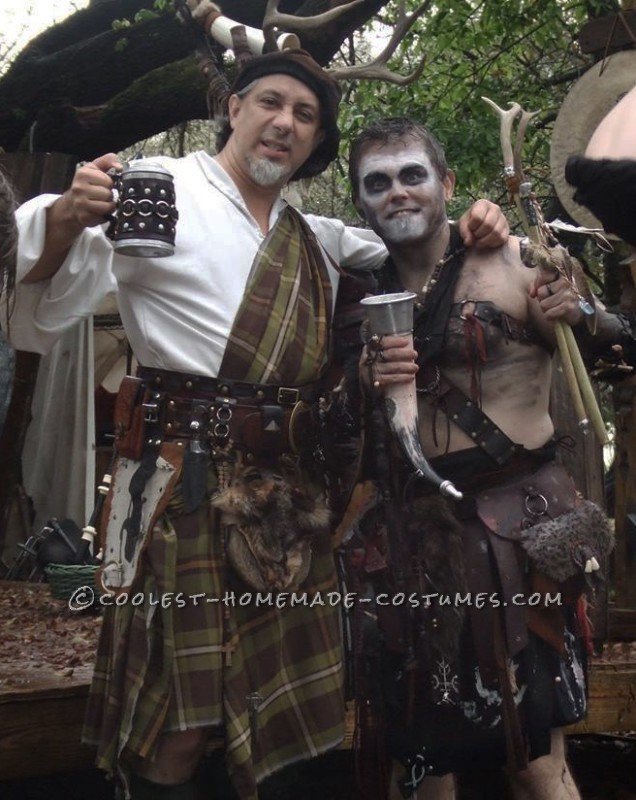