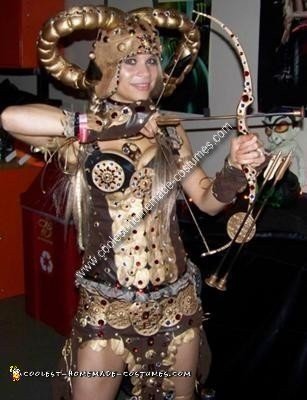 I wanted to be fantasy type warriors for Halloween, just one problem!! I couldn’t find anything cool enough or close to what I had designed in my head. So I decided to make a Fantasy Warrior Chic Costume, & it turned out AWESOME! (in my opinion anyway..lol). I started with some faux leather fabric, about a yard and a half of brown and a yard of black. I had an old corset type shirt that I didn’t care about & I partially sewed & partially glued (E-6000 glue is AMAZING) the brown faux leather material around the bodice & used the black for the top (bra part) I sewed the top thickly so that it would look hand-made warrior like!

For the skirt I used a pencil & drew out a pattern onto some of the brown faux leather fabric, which was doubled over so that when I cut it I would have an even front & back of the skirt. Once drawn I pinned the two layers of fabric together along my lines then cut it out.(I measured my waist first & drew accordingly with a measuring tape to be sure the skirt wouldn’t be way too small or way too large.) I used gold lace like strings (from hobby lobby) to string the front & back of the skirt together at the sides, that way I could tie the skirt tighter or looser.

I used the most on this costume is ‘GOLD SPRAY PAINT!!’. For the metal scales on the costume I went to ‘Hobby Lobby’ & bought a bouquet of fake leaves (like you put in a vase) and I tore the leaves off, individually laid them out on a paper bag & spray painted them GOLD metallic. I glued them strategically onto the costume. They worked like a CHARM! I also bought all the jewels & studs at hobby lobby (if you go on a 1/2 price day these things cost next to NOTHING!). Some of the gold studs on my costume are GOLD THUMB TACKS, others are buttons in which I just clipped off the back of them!! I took some wire cutters & clipped the sharp part of the thumb tacks off then just used my trusty E6000 glue & glued em’ on!!

As for my belt & the round plates over my bra area this was just an old belt I had that I never used spray painted gold metallic & decorated with fake jewels! Easy right! (although I considered using Tupperware container lids spray painted gold before I remembered I had a belt with round links!)

The helmet and horns were probably the most difficult, but the most important!! The helmet, I got lucky & found a cloth helmet like hat in the winter hat department, it had a football team logo on it. I spray painted it gold, of course. Then glued jewels on it. THE HORNS, foam pipe insulation (hardware store) & some strong really thick wire. Bent the wire like I wanted the horns & slipped the foam over the top. I used rubber bands to make the indentations in the horns then just spray painted them gold, rubber bands & all. Once they dried I of course glued some jewels on there then used the E6000 glue & glued the horns individually onto the helmet. I had 2 prop these up with different things while they dried to the helmet, a little tricky but not impossible. The end tips are cut pop cans rolled up into points & spray painted black then glued on & the round ball at the end was just a wooden round bead I found at hobby lobby painted gold.

I almost forgot about the trim. I found trim at Hobby Lobby with pheasant feathers attached to it, thought it would look amazing on the costume & glued it on. The knives & the bow & arrows I bought & just spray painted gold then glued on some jewels. Jewelry was also some old jewelry I had that I spray painted if I needed to. The boots I had & I just took a strip of material & glued some of the leaves I had spray painted gold onto it in a row, then I fastened the strip of material with the glued on leaves to the front of the boots so that I didn’t ruin the boots & I could take the material off after Halloween.

My hair, I went to Sally’s and bout some hair extension (cheap) fake hair. Split my real hair into two pony tails, then rubber banded the fake hair onto the top of my pony tails then just braided it with my real hair. I took some of the brown faux leather material & cut it into strips & tied them at the top of my braids so that no one could see the fake hair tied on! Worked GREAT. I had to do this because my real hair wasn’t very long or that thick!

I had a shield too, but I never took a picture of it. I went to the Hy-Vee deli department and bought a round metal platter, spray painted it gold & glued jewels on. BUT, this didn’t work that well because the platter surface was really smooth & the paint peeled right off if something too heavy was glued to it. Maybe take some sandpaper and rough the surface up first before spray painting, that may work.

As for my animal fur blanket deal, that was about 1/2 a yard of faux fur material from hobby lobby. Looked cool with the costume!

Gold nail polish can be used to paint anything that maybe you might not want permanently gold, if it’s something small. I used gold nail polish to paint the silver embellishments on my boots & then just used remover to take it off later.

I used some of the faux leather fabric for my arm bands then poked holes through edges so that I could use the gold lace string to lace them together in the back. (I used a paper hole punch to punch the holes through the fabric of the skirt & the arm bands for the gold laces.)

My husbands horns were made the same way. Most of his costume we bought though.

That’s all I can think of to tell. This Fantasy Warrior Chic Costume was A LOT of fun & got tons of compliments. Not to mention how much fun I had getting creative & making it from scratch. Halloween is about the only time of year we get a chance to really get creative, it’s always so much FUN! 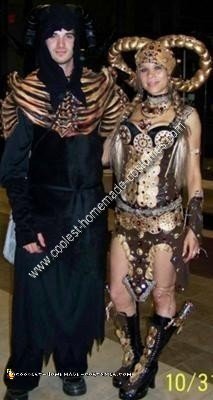