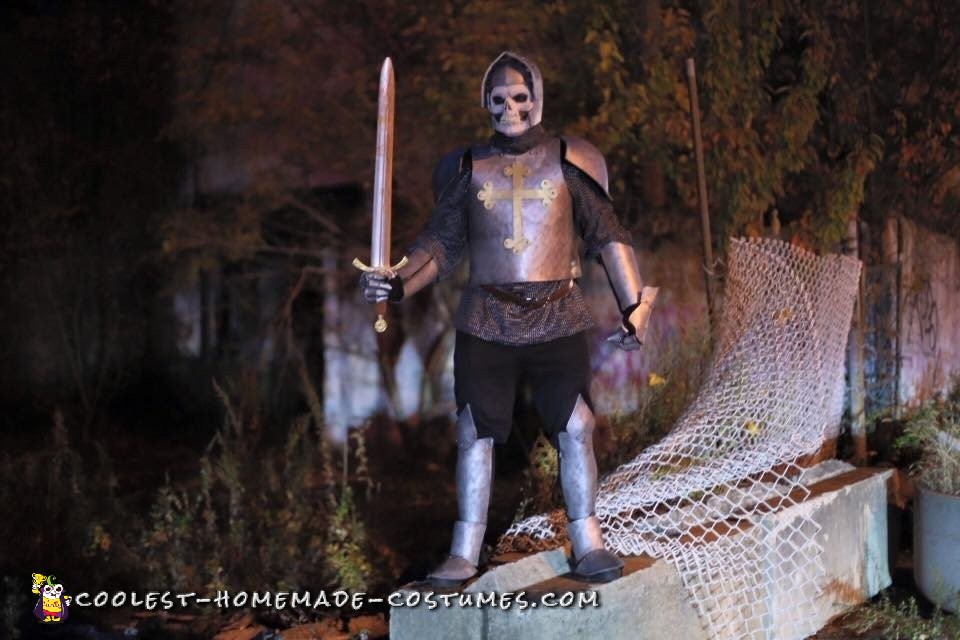 So, I am a huge Halloween enthusiast! Every year, I always get super excited about planning and creating a costume.  Being that I was in the Marine Corps for 4 years and missed out on celebrating my favorite holiday all that time, when I finally came back home I told myself I would make up for lost time.

Since coming home, I’ve been maintaining the theme each Halloween of resurrecting a classic horror character and puting my own personal twist on it.  I was a Mummy, Scarecrow and a clown.  Each costume was homemade and had its own twist and personality.  Each year was a success, with tons of compliments (and even winning several costume contests!)

This year, the inspiration for my costume came early.  For my birthday (in June!), my girlfriend surprised me by taking me to one of my favorite places: Medieval Times!

I’ve always been a huge fan of the Medieval Ages, Knights and Dragons (lol).  I was convinced right then and there that I wanted to construct and become my own personal Knight Costume for this upcoming Halloween.  My horror twist would be to make this knight a Medieval version of the Grim Reaper.  As the planning stages started to commence,  I thought it’d be perfect to name my character the “Knight* of the Living Dead”.

After looking at several YouTube Tutorials with instructions on how to create armor, it was evident that I would be constructing my armor out of foam.

The foam is .25″ and usually used for home gyms etc. (For smaller parts like the hand gauntlets, craft foam is fine). However, when cut into certain shapes and carefully heated up by a heat gun, this foam can be used to create armor!

After several trials and errors, I measured and traced different parts of my body that I intended to build armor for (ex: head, hands, forearms, chest/back, shoulders, shins, feet).  Once I had the outline of all the armor traced onto the foam, I used an exact-knife to carefully cut out each piece of foam and used the heat gun to soften and bend each piece of foam into whatever shape I wanted.  Each piece was then spray coated with Plastic-Dip paint to give a metallic undertone as well as assisting in maintaining whatever shape I wanted to maintain.

For rounded armor piece (Helmet, shoulders) there would have been to much bending to be done in order to achieve the particular curves I would have needed.  Instead (with the guidance of several YouTube tutorials) I learned to cut the foam along any seams that had the most bend to it.  This allowed me to cut the foam, bend it a bit, then use Barge Cement glue to adhere the pieces together, achieving the particular curve I needed. 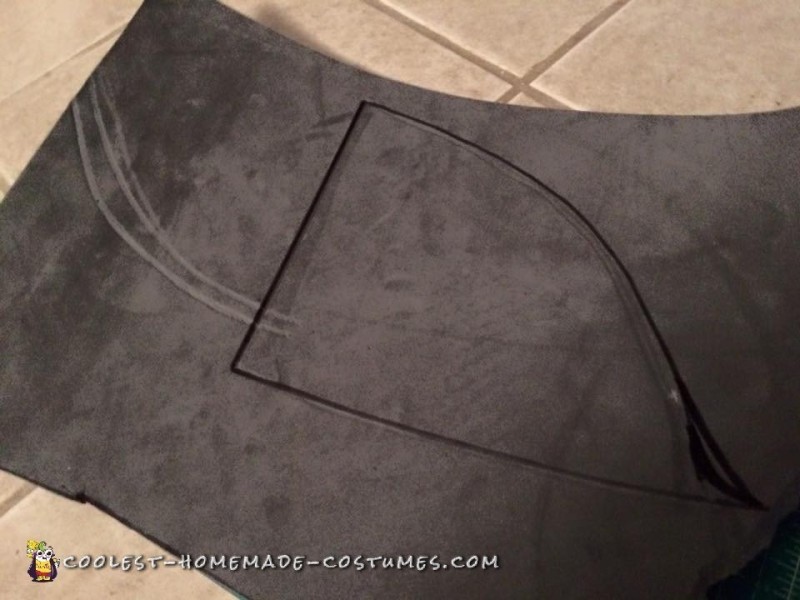 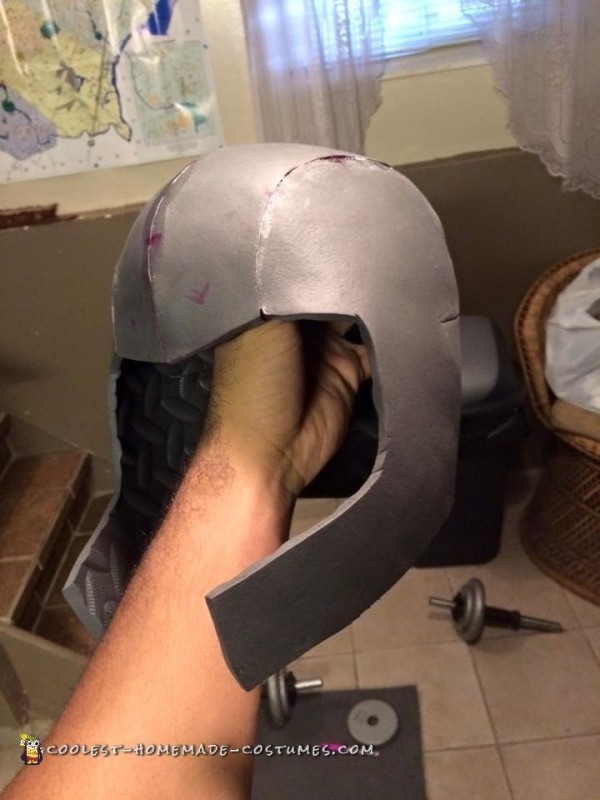 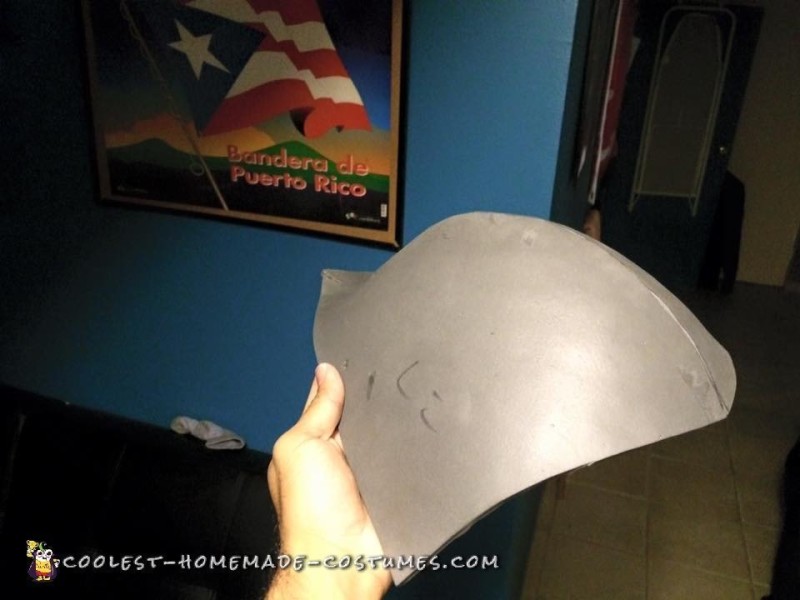 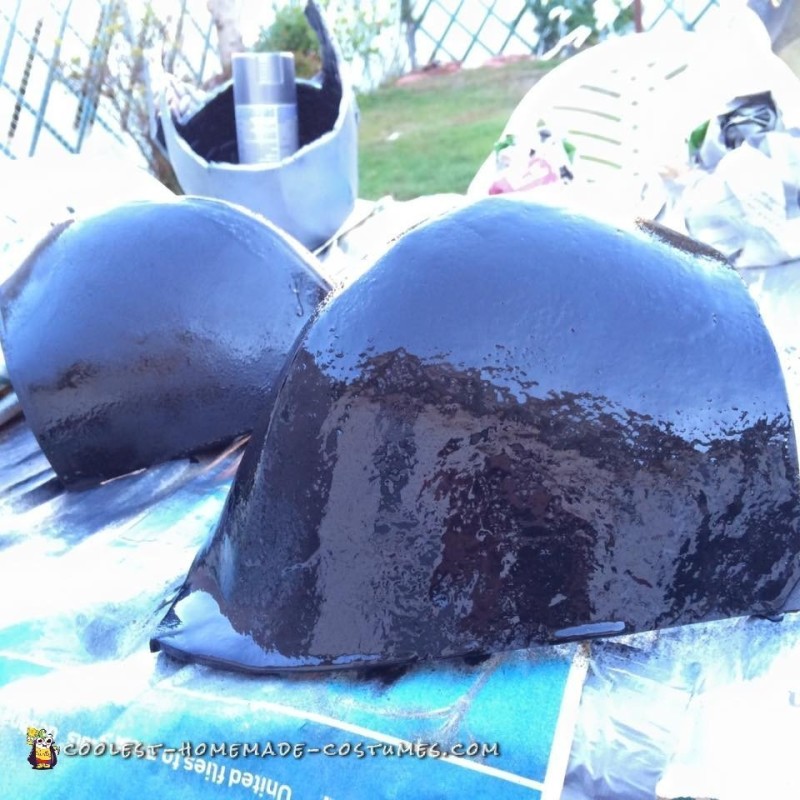 For paint, I used gloss silver paint.  Instead of doing one solid spray coat, I sprayed a generous amount of paint onto an old rag, and did several strokes in random directions in order to achieve an “aged metallic” look.

For the gold accents (the cross, the sword hilt), I used  blend of gold gloss and gold metallic spray paint.  I also used several even spray coats of metallic silver for the sword, to make it look more realistic.

I then sporadically splashed some fake blood on the sword and swung it around a few times to let the blood flow in more natural directions.  I also wrapped some spare faux leather around the handle of the sword to make it more realistic.  (The sword, “chain mail” tunic, and skull face prosthetic were the only items I didn’t construct myself.) 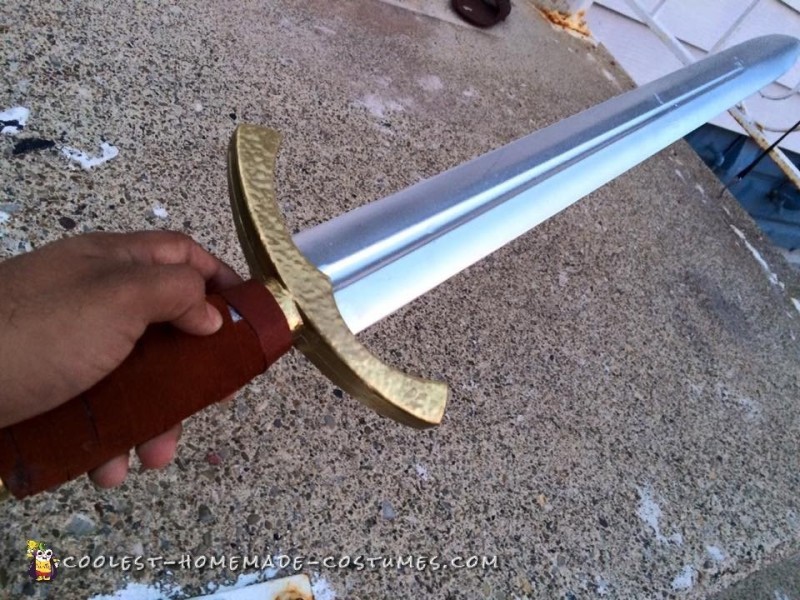 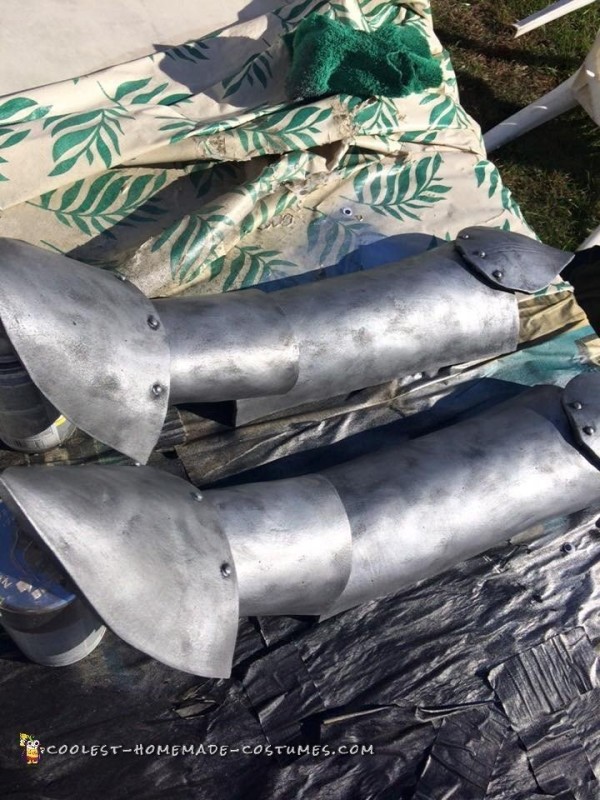 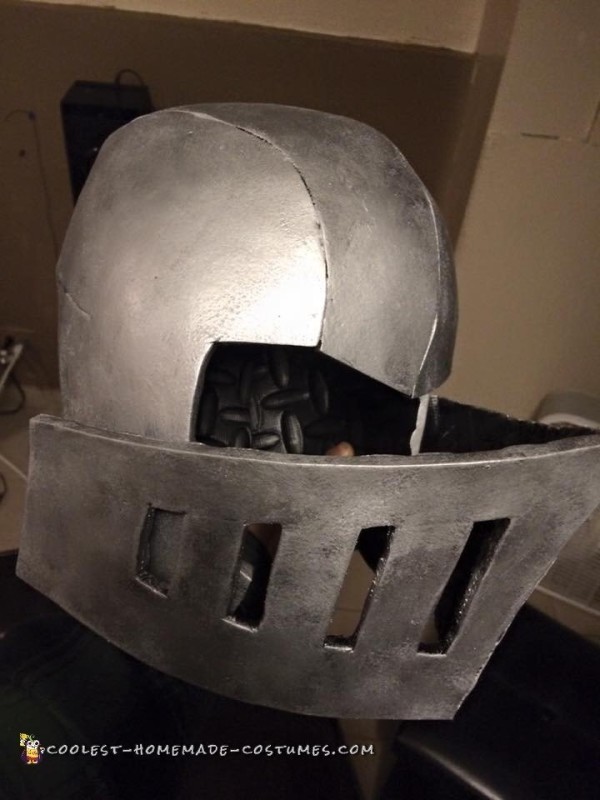 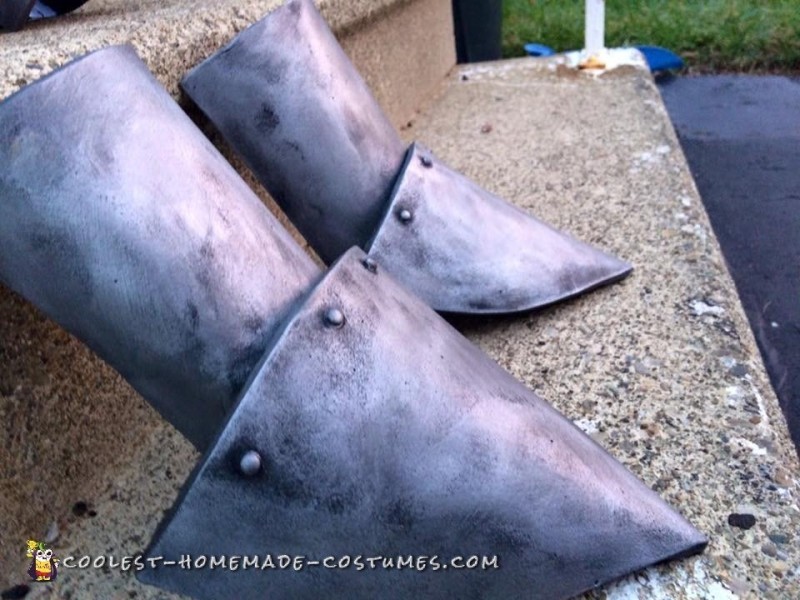 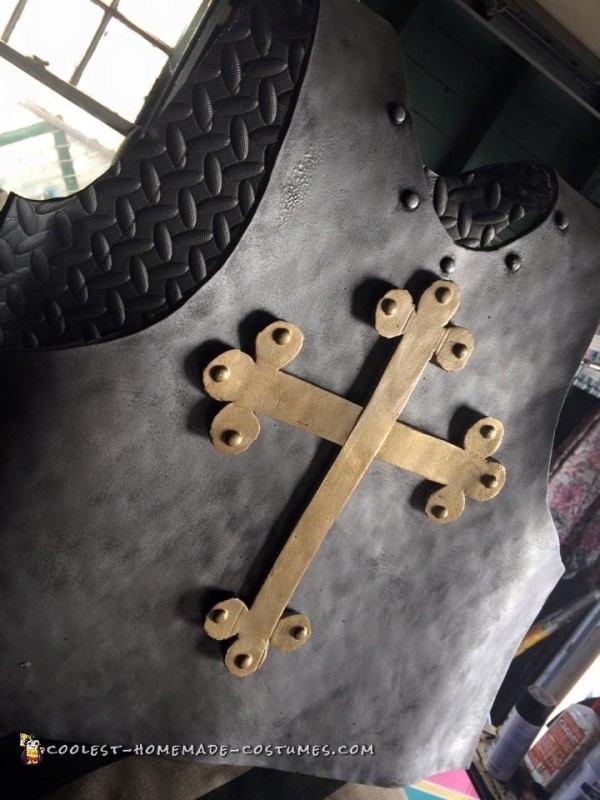 Once everything was dried, I had to find a way to wear the costume without it falling apart. I used pieces of double sided Velcro to attach the shoulders to the torso piece.

The torso piece also had strips of Velcro on the in-seam along both sides.  The helmet slid comfortable over my head and the face mask was fully articulate.

The forearm pieces had one inseam along the inner forearm which was Velcros to itself.  The glove gauntlets were hot-glued onto a pair of work gloves making it easy to wear and take off.

The Shin/shoe pieces had straps of Velcro to attach along the back of my leg and under my shoe.  I used an old brown leather belt to use as an occasional sword holster, though I felt more comfortable carrying my weapon in my hand.

To create the “Dead Knight” element, I used a skull face prosthetic that I painted and adhered to my face using Spirit Gum.  The jaw was fully articulate so I was entirely able to speak and eat and, more importantly, drink.

I couldn’t have been happier with the results! Everyone was impressed by the quality of the costume and were astonished to find out it was made out of foam and not actual metal. Happy Halloween! 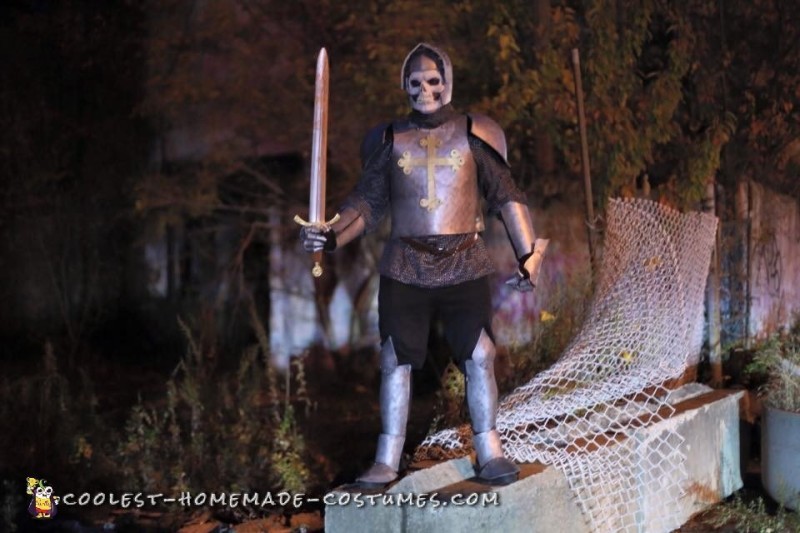