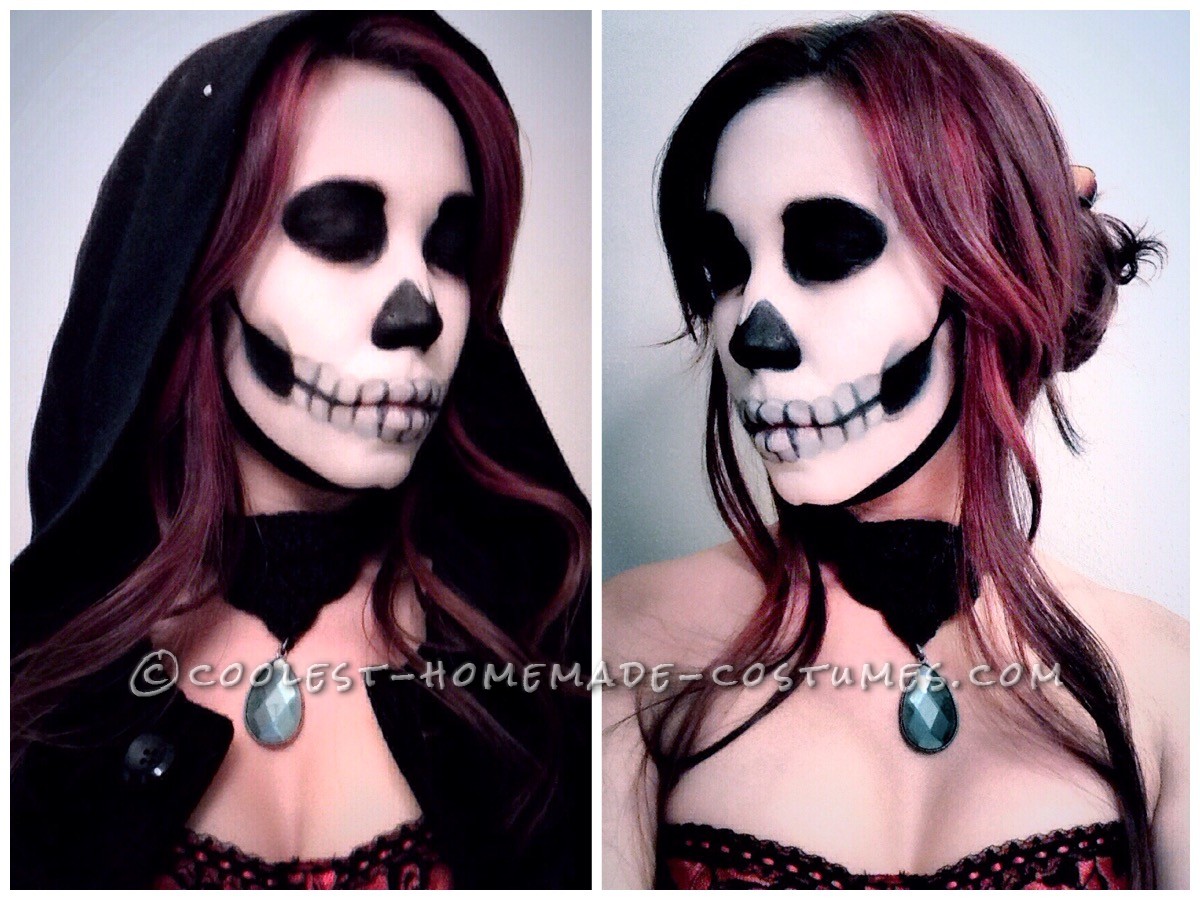 This year I was really excited to try my hands at creating a costume that was both interesting and fairly easy (and cheap!). The awesome thing about a skeleton face is that it is transformative. I put it with a cape and some pieces I had around the house (a corset, skirt, and leggings) to create Lady Death. Match it with a formal dress and you’re a Dead Diva. Put it with a regular outfit and be the dead version of yourself. It’s easy to get creative when a skull is your feature.

This was my first go with skeleton makeup, and I was thrilled with the results. It was a blast walking around town (especially when we were all at dinner and folks passing outside would catch a glimpse through the restaurant window and do a double take). After the night was over, my regular face-wash and a wash cloth returned my face to normal with relative ease.

The supplies I used were:

1. I’d recommend pulling up a photo of a skull to help get some of the shapes right. I started by using the thick pencil to draw the black shapes between the jaws, around the eye-sockets, and over the nose.
2. Once those shapes were blocked out, I used the white cream foundation and covered the rest of my face in white (pretty much straight up to the hairline and a little bit down under the jawline).
3. Take your white powder and blot it over the white areas to help set the color.
4. At this point, I used the thick black pencil to fill the black spaces and draw the bottom edge of the jawline.
5. I also colored the entire bottom of my jaw to my neck black.
6. Now with the thinner eyeliner, I outlined the black shapes and drew the teeth line on either side of my lips.
7. Draw the vertical lines to separate the teeth.
8. Now, time for the shading! I took the thin eyeliner and lightly drew the sections that would mark the teeth, shading line that comes up onto the cheekbone, a little bit around the bottom of the eye socket, etc.
Then with my finger, i softly blended the shading lines into the white.
9. Almost done!
10. Take your black eyeshadow and blot it over all of the black areas to help darken and set the color.

Now match it with any outfit and you’re ready to kick it with the gouliest!

Have fun and thanks for looking.