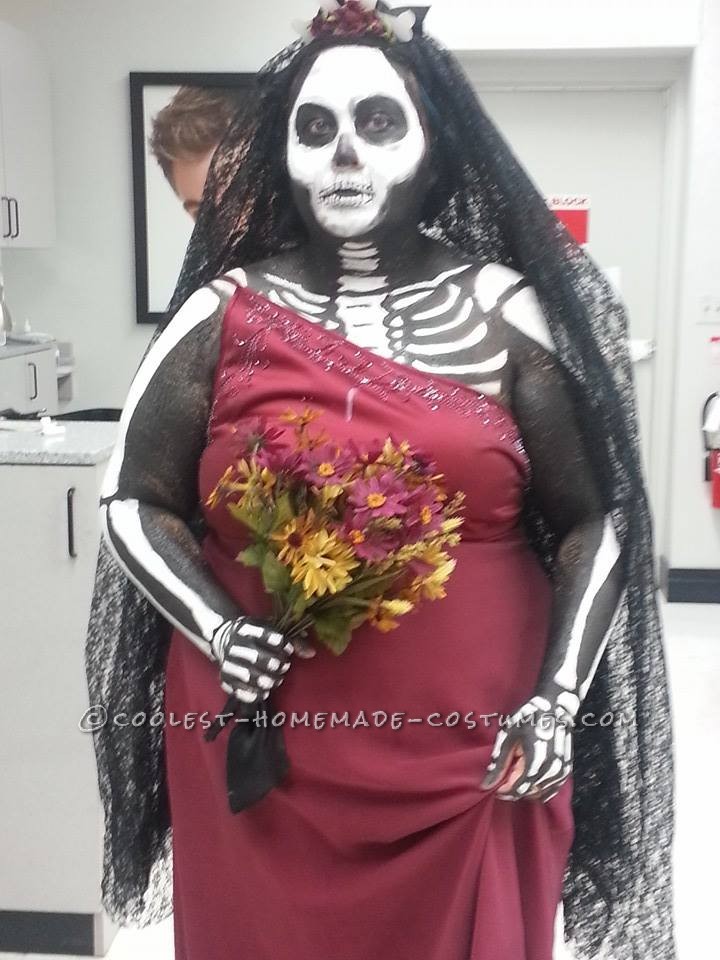 This year I let my husband chose our costume theme and he choose skeletons. I thought ok, easy enough. But was it too easy? I thought the sugar skull theme was done last year and I wanted to stand out. So my original idea was “Santa Muerte” Saint of the Dead. Sounds pretty scary, right? I needed a robe, dress, crown and veil. I already had a dress. I dusted off my old wine colored bridesmaid dress and bought some black Rit dye. It seemed more deathly if the dress was black. So an hour and a stained black washing machine later, my wine colored dress was just that. Wine colored. For future reference 100% polyester does NOT, I repeat does NOT take dye.

Now what? I scrap the saint idea. That didn’t really fit me anyway. I’ll be a skeleton couple with my husband. I used a black headband and sewed onto it a double layer of lace for my veil. I picked up the ugliest cheapest flowers I could find and taada, costume done. All that was left was skeleton bones painted on my skin. The lack of robe made this necessary to have an awesome costume.

The day of Halloween I found a makeup tutorial online and started on my face. I went to the elementary parade as well as trick or treating. People looked and thought my face was cool but I was nowhere skeleton enough to be finished. That night we had a costume party to go to. I painted on my body bones with black and white cream 99 cent make up. All the makeup was set with eye shadow. I’m no skeleton myself so this was a big job! Two hours later I was ready. If anything I’ve learned, the time and patience is what can make something really great.

I walked into the Halloween party a little late and I felt like all eyes were on me. At that moment I knew I had an amazing costume. People came up to me and told me how amazing my makeup was. Some people didn’t even know it was me. Success! Halloween is all about transforming yourself into something different. The next day a local bar was holding a contest and the grand prize was a trip for 2 to Las Vegas. With the reaction we received I thought we had a chance. I would be going without him though. To win it for us solo I needed to step it up. I bought black and white body paint at our local Ben Franklin and asked a friend to draw and paint my bones for me.

It turned out far more awesome than I thought it could. Again I’m “big boned” so 3 hours later and arm muscles shaking from being held up while I dried. I was AWESOME and scary. Now this time around people couldn’t stop staring. Or commenting at how scary I was. Every time I walked by a group I could hear the comments of what they thought of my costume. Some wanted to touch my skin because they thought it was a body suit. Did I mention I also glowed in the dark? This was the best Halloween yet. Even though I didn’t win us the trip to Vegas. Some guy in a striped suit and a whistle won. Go figure! 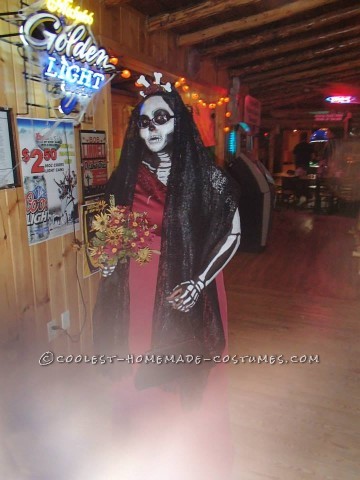 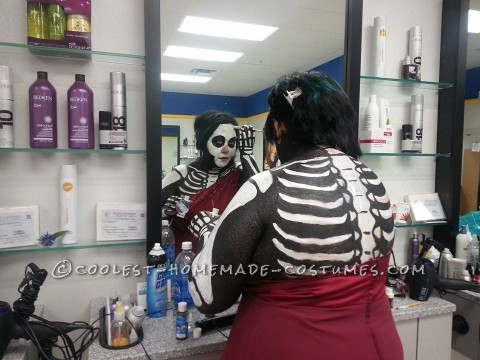 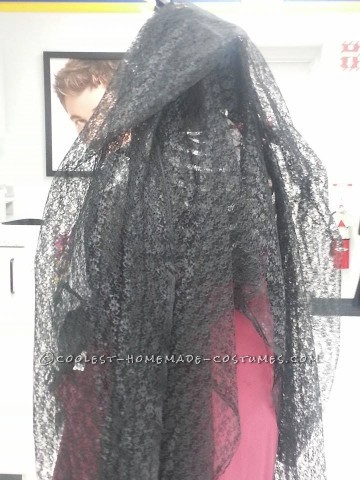 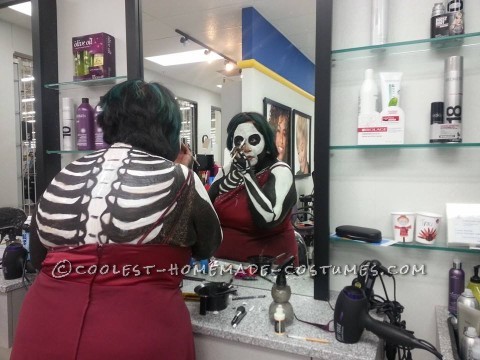