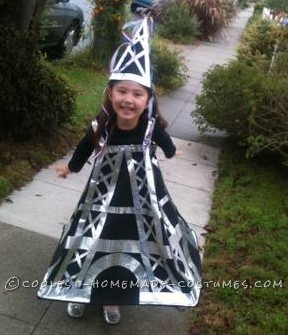 Paris is always a good idea and this  Eiffel Tower costume will have everyone saying ooh la la!

Who doesn’t love or dream of Paris, the city of lights?!  My daughter Lulu (Lucia) attends a French American school, so it was no surprise that when I suggested an Eiffel Tower costume, she proclaimed it was the best idea EVER.  Considering the minimal and inexpensive supplies, the costume really makes a fantastic impression.  At Halloween parades and while trick-or-treating, she was turning heads and bringing out everyone’s rusty high school French to compliment her.  She even won a prize at our local Halloween costume contest in Albany, California.

The costume couldn’t be easier to make.   I just cut 4 panels of a heavier black fabric into isosceles triangle shapes with the tops cut off.  I’m a novice sewer, so I just used the most basic stitch to sew the panels together.  I then added a hem at the bottom to put in some strong gauge wire so the dress kept its 3D shape. 2 straps were added to the top.  Then the hat was made of cardboard with the leftover triangle fabric tops stitched to it.

Once these parts were done, we used metallic duct tape cut with an exacto knife to build the tower onto the dress and hat.  Then we added red, white, and blue striped ribbon as ties to secure the hat, and also added the same tri-color ribbon on the very top for some extra French patriotic flair.  A black undershirt and silver slippers completed the look. We had the black undershirt and shoes already, but other than those items, everything we needed ended up costing less than $25.  Très chic and très cheap!

Just one person (apparently living under a rock) couldn’t quite make out what she was and said, “oh my, a wizard!” But that encounter and our struggles to contain our laughter, just added to this very memorable Halloween.