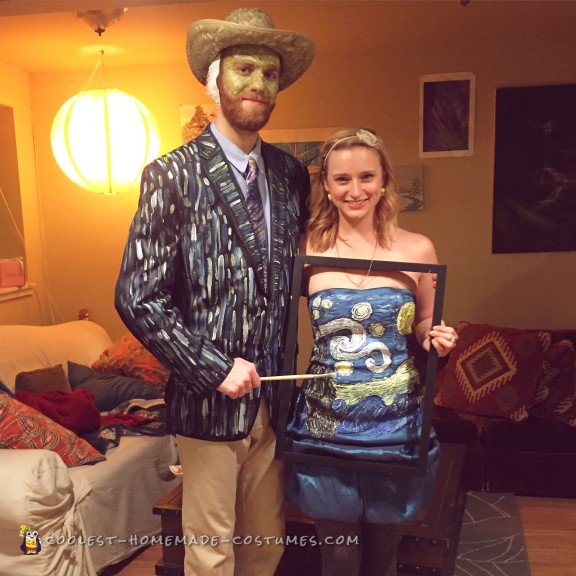 Bradley is dressed as Van Gogh from one of his famous painted self portraits. (We added his bandaged ear to make the reference extra noticeable.) Grace is dressed as Starry Night, one of Van Gogh’s most esteemed paintings. We knew we wanted to do a creative couple costume, and didn’t want to do something that has been overdone or something cliche. I have never bought a costume from a costume store so we were looking for something that we could create that would be unique.

I have always loved Starry Night and Brad bears a striking resemblance to Van Gogh (except he has two ears) so we decided it would be perfect. We bought the dress, hat and blazer at Value Village and I painted the dress and jacket modeled after the paintings, using lots of fabric paints with short brush strokes and layering colors. I painted Brads face with makeup paint. I wore a picture frame attached with a necklace chain to further accentuate that I was a painting. And the rest is history! Art history that is… 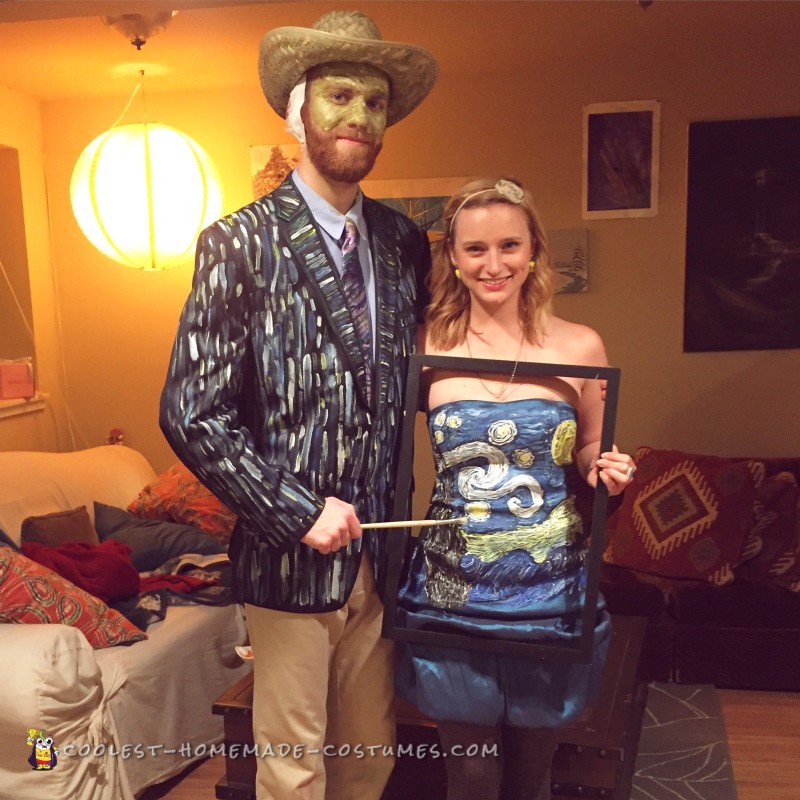 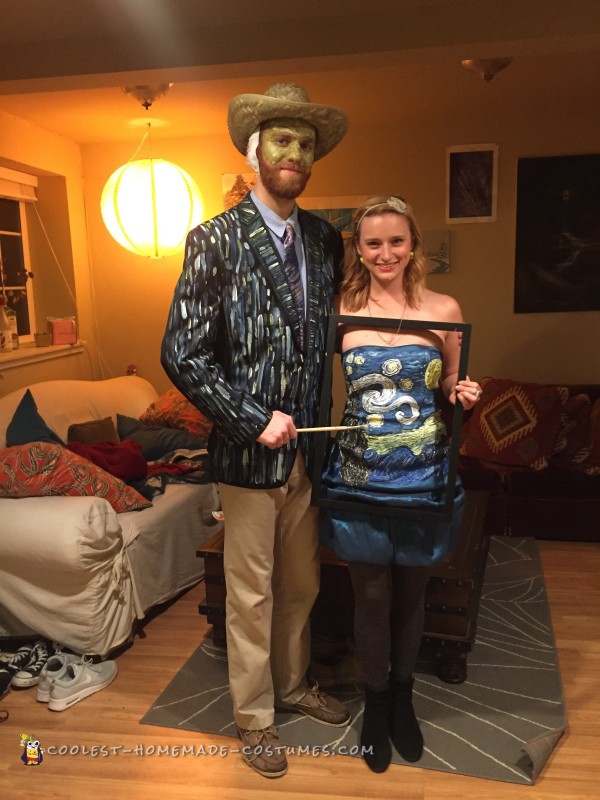 The Dress and the Starry Night Costume

I bought the dress at Value Village. I thought it was a perfect canvas for the painting, because it was strapless. Therefore it’s a natural square shape. And the fabric was a dark blue metallic and shiny type of fabric, making it look like the sky just before sunrise, which is when Van Gogh painted The Starry Night (1889). Then, I bought fabric paint in the primary colors, so I could make any color that I needed in the painting.

First, I outlined the big figures in chalk on the dress, and then painted with the fabric paint in short brush strokes, and using a layering technique. I chose to wear jewelry and a headband from around the house that fit into the the design and color scheme of the panting. I chose to wear an old picture frame connected with a necklace chain around my neck, to further accentuate the fact that I was a painting. This hung and framed the painting on the dress perfectly. 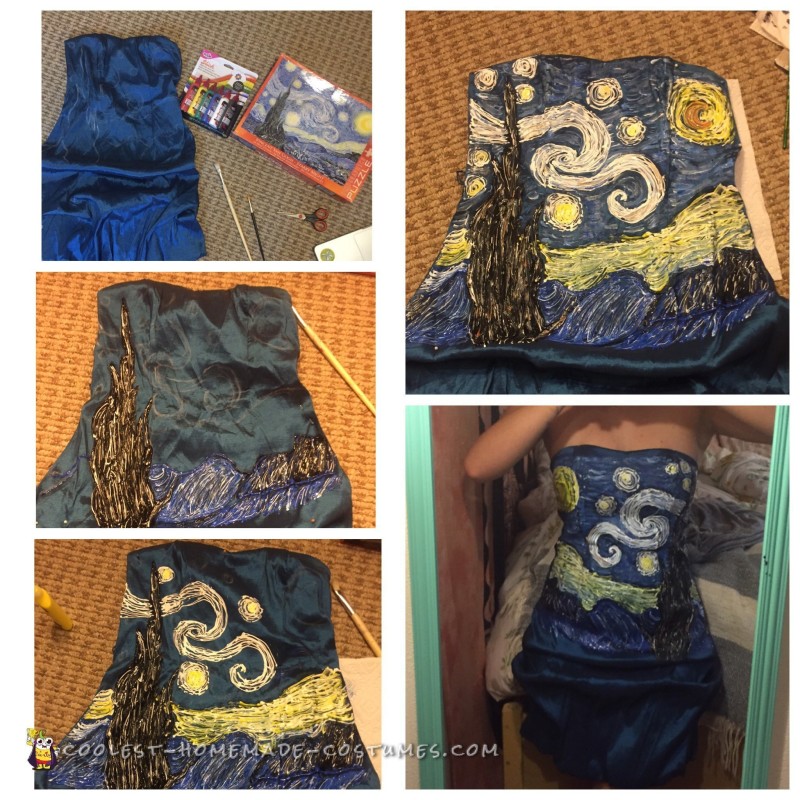 The painting of the Starry Night dress 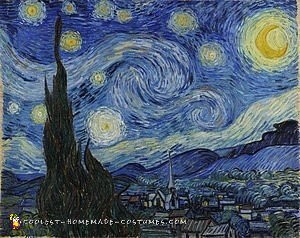 Brad’s costume was inspired by Van Gogh’s ‘Self Portrait in a Felt Hat’ (1887). We bought the blazer and the hat at Value Village. We painted the jacket in a similar manner as the dress, with short layered brush strokes in alternating colors of the same primary fabric paint. Brad re-purposed one of his ties that had a swirly design on it. Then we painted extra lines on top of it with the fabric paint.

We decided to add his bandaged ear to make the Van Gogh even more obvious. Even though his bandaged ear is not present in the self portrait we modeled Brad’s costume after. We used gauze and medical tape for the bandage, and added some marks from red lipstick on the gauze, to add a more gory effect (It’s Halloween after all!).

Then, we painted Brad’s face with white and green makeup paint using short brush strokes. Brad carried around a paintbrush and would point it at my dress everytime we posed together. 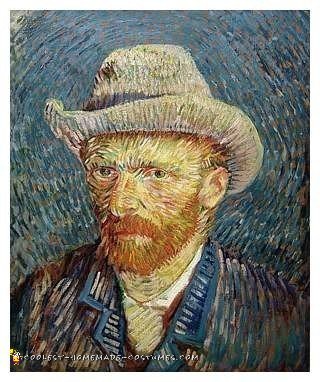 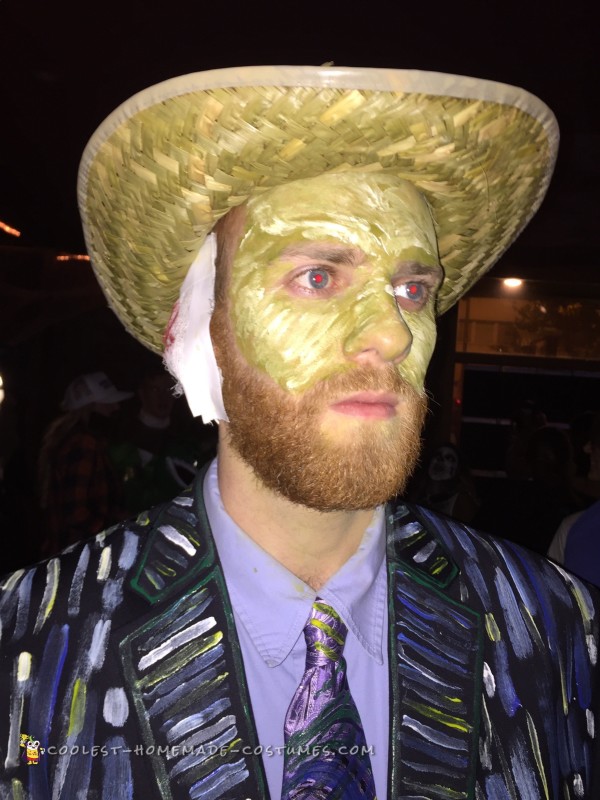 Brad and I decided to go bar-hopping on Halloween night. So we had the privilege of showing off our creative couple costume to a lot of people around town. Everyone’s reactions were very positive. Most people would recognize Brad first (probably because he’s a lot taller) and would yell out “Hey! Van Gogh!” And after that we would immediately get in our pose with me pointing to my frame and Brad pointing his paintbrush at me, and people would go crazy over it. We got a lot of “Best couple’s costume ever!” quotes over the night.

Generally, I try to go for the most obscure costume that I can come up with, because I like to be very unique. This creative couple costume was great because while it was very unique, and we were the only people in these costumes as far as we know, almost every single person was able to recognize who were right away. It was my favorite costume I have ever dressed up because of that. We were able to connect with people we didn’t know just because of the content of our costumes and our combined harvest of creativity. Isn’t that what Halloween is all about?! 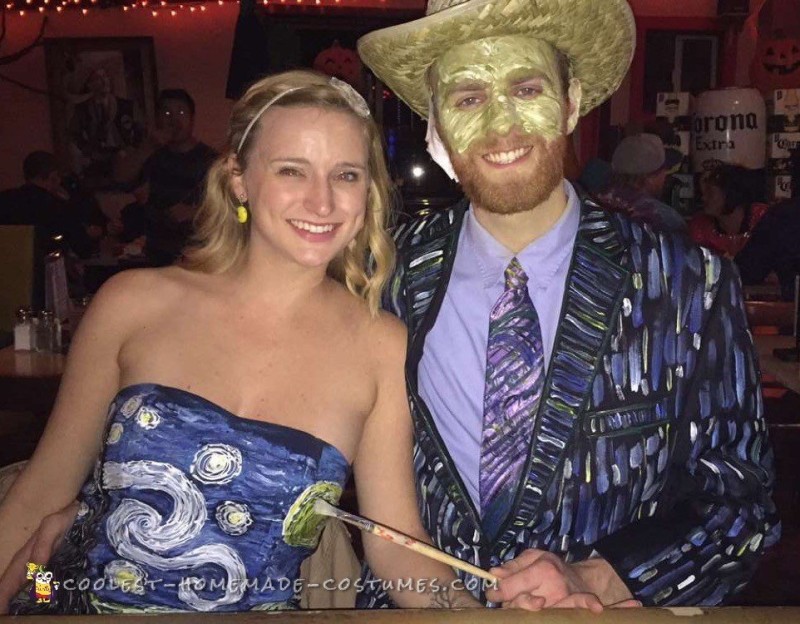 Close up on costumes