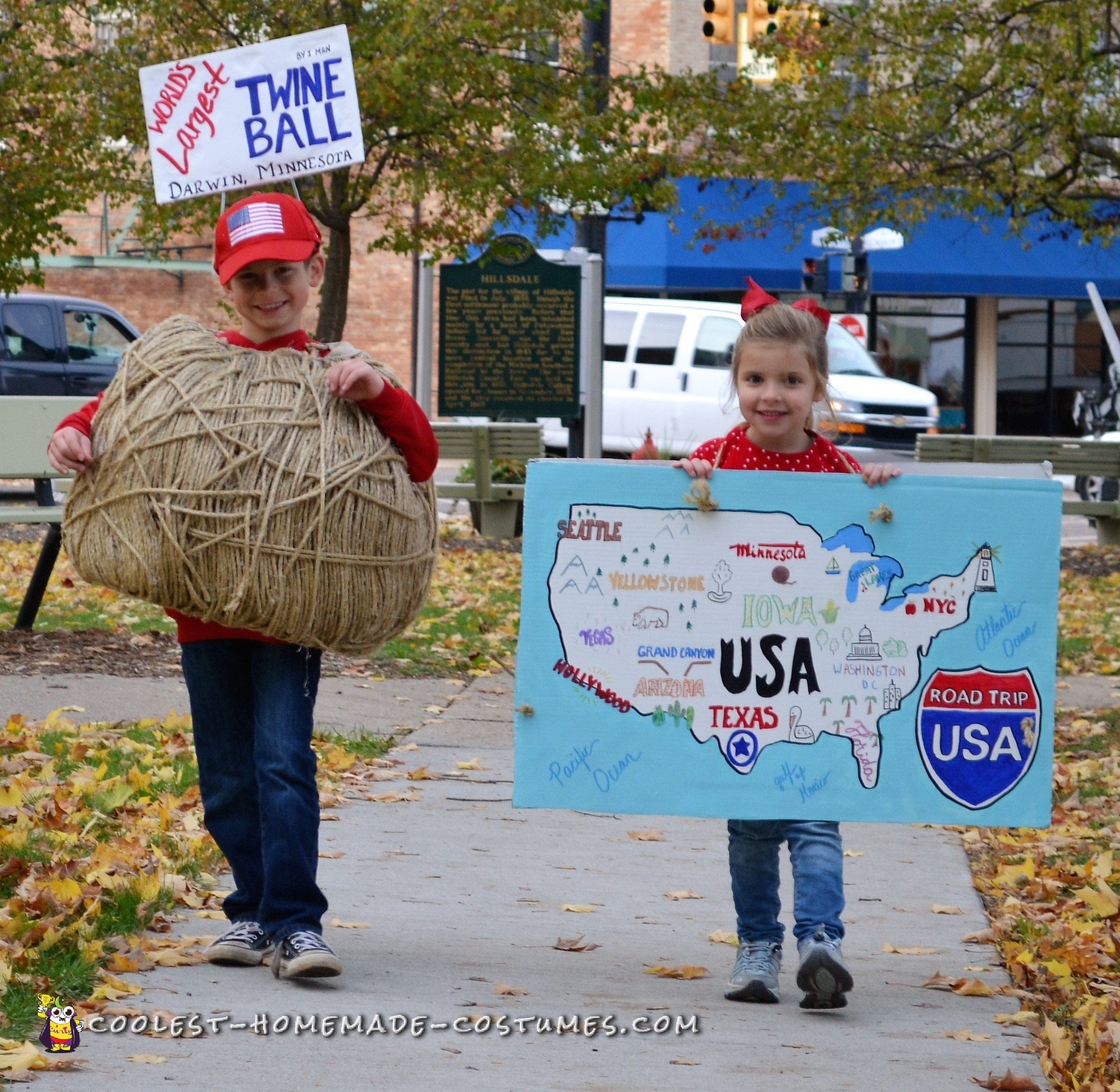 This year, as our family was on a road trip, we started talking about the essence, spirit, and tradition of road trips, and all the unique, interesting, and sometimes kitschy places people visit when driving across the United States. That conversation is what gave rise to this year’s creative homemade costumes: The Great American Road Trip.

My 7-year-old son and 5-year-old daughter always enjoy having coordinated creative homemade costumes. So we decided to have my son dress as the Largest Twine Ball Rolled by One Man. And my daughter dress as a postcard featuring various road trip locations across the US. The back of the postcard is designed like an actual postcard. Complete with a cancelled stamp and a “Wish you were here” message addressed to Grandma.

The Largest Twine Ball rolled by One Man is a real-life attraction in Darwin, Minnesota. It was rolled by Francis A. Johnson, who began rolling twine in his basement in 1950. He didn’t stop until 1979 when the ball weighed in at nearly 9 tons and measured 12 feet across.

I will admit that this costume was more complicated to make than I had anticipated. I found myself having to channel my inner Francis A. Johnson and press on even through frustration and discouragement, through a torrential rainstorm that threatened to flood the garage where I was working. Through my dog escaping while I was working and me running after him with yards and yards of twine in hand. Through moments of self-doubt (maybe I should just go buy a superhero costume at the discount store?!?).

The greatest challenge in making the costume was that in order to keep from obstructing the arm, leg, and head openings in the ball, I had to cut the twine and glue it on piece by piece to cover the whole ball. The process was quite tedious, but yet someone oddly compelling….and satisfying……….I think I began to understand what made Francis A. Johnson just keep on wrapping. (It is said that he worked on the twine ball 4 hours per day every day!)

I missed tucking my kids into bed a couple of nights because I was out in the garage working on the Twine Ball, and it made me wonder if Francis A. Johnson had kids and how he balanced his family life with his passion for rolling the Twine Ball. Between the tedium of the gluing and the odd subject of my work, it wasn’t long before I was making up a script for a Twine Ball mockumentary in my mind.

Now for the “How To”: We began by bending some chicken wire into a roundish shape. I then covered the chicken wire with batting on the inside and outside to keep it from being pokey. I painted the batting brown to camouflage any bits that might peek through the twine. Then I set to work painstakingly covering the ball with twine strand by strand. Once it was completely covered I went back and wrapped other pieces haphazardly around and across the ball. This was in order to give it the look of having actually been wrapped. Once the ball was completely wrapped, I glued some scrap fabric inside the arm and head openings. This was to cover up the loose ends of twine and make it more smooth and comfortable for wearing.

I then took an old ball cap and covered the logo with a laminated American flag. Using some fairly heavy duty wire, I cut it to length and then poked it down through the hat and glued it in place. I made the sign from foam board and poster board. Then I decorated each side as desired and then glued them together, sandwiching the wire in between so that you get the effect of the sign being suspended over the twine ball.

I kept the design of the signs simple and  true to the style of the actual signage at the Twine Ball in Darwin, MN. The postcard is made out of the remains of an appliance box. I cut the pieces to size, primed them, and then drew the design on each piece and labeled and painted it as shown. I used leftover twine to attach the front and back of the postcard so they can be worn sandwich-board style.

Reactions to our Creative Homemade Costumes

This is definitely the most unique costume either of my children have ever worn. Believe it or not we actually had some fairly tense negotiations related to sorting out which child was going to get to be the Twine Ball and which one would have to play the supporting role of postcard.   The costume sparked a lot of interest and curiosity when we took it out in public.  We  trick-or-treated near a college campus and encountered students from Minnesota and others who aspire to visit the attraction in Darwin.  Several people asked to get photos of the kids in their creative homemade costumes, sometimes jumping into the photo themselves.  One enthusiastic college student declared that by costuming our kids like this, my husband and I are “winning at the parent game!”—which is all anyone can really hope for, right?

We had a lot of fun working on this as a family. It inspired some research and some study of geography as well as many nostalgic musings for my husband and I as we reminisced about taking road trips during a simpler era of paper maps and kids moving freely around the back of the vehicle, unharnessed and free to harass one another without the distractions of handheld games and portable DVD players.

We plan to do our best to keep the Great American Road Trip alive. And Darwin, Minnesota is on our itinerary! 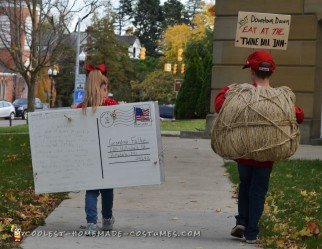 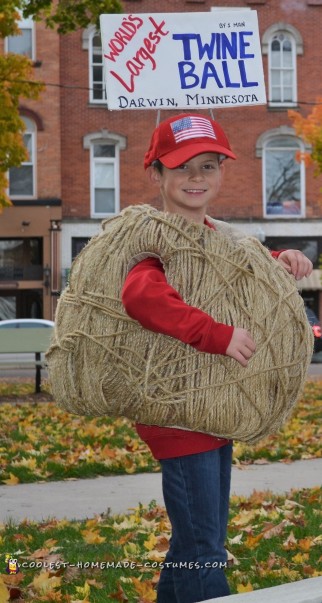 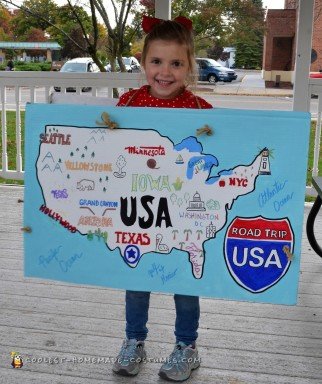 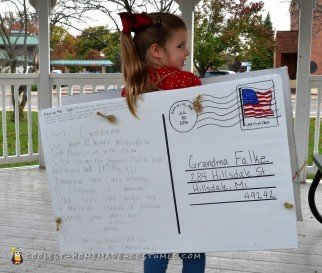 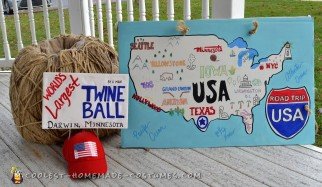 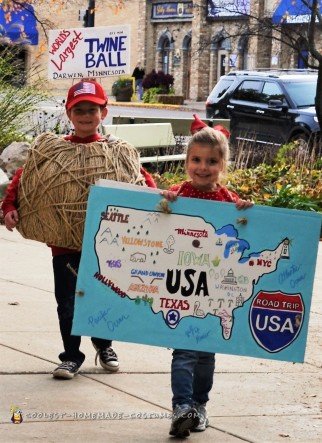 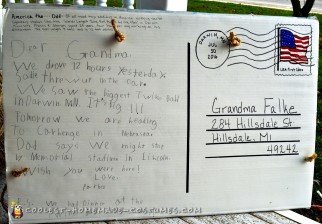 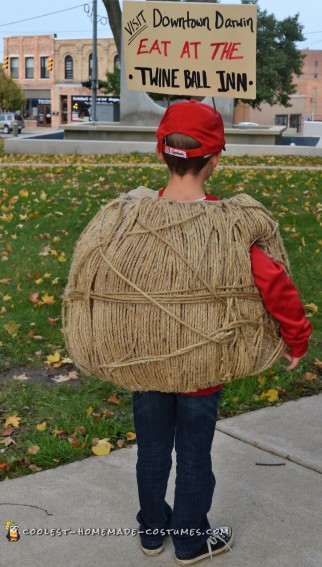