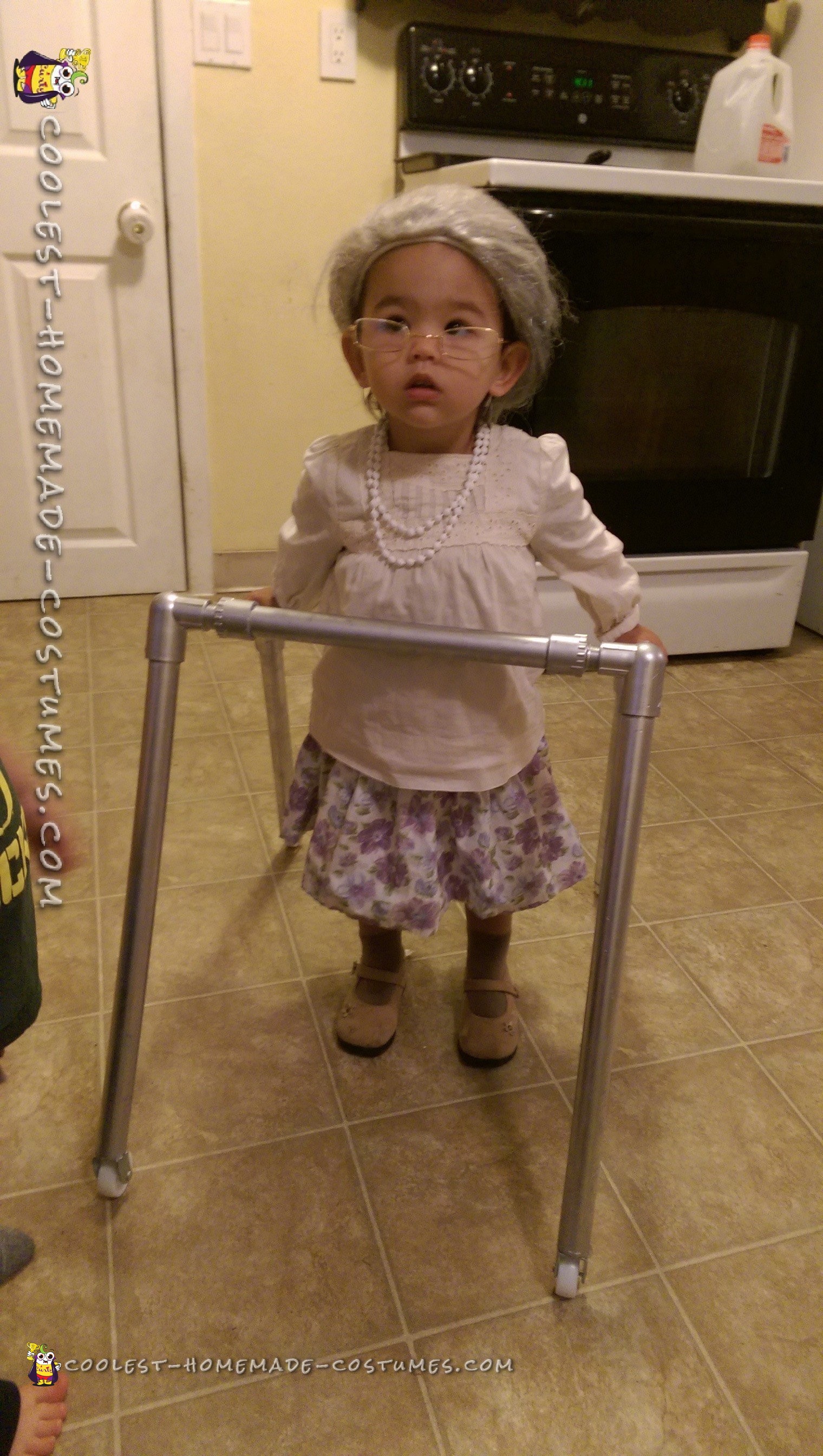 About two months before Halloween I got this idea, I actually had already bought her a monkey costume to wear on Halloween but this idea was way better and she was at the best age for it to be super cute. I started with making the walker I went to home depot and bought PVC pipe, connectors, and wheels.

Making the walker was easier than I expected once I cut the pieces to the right size it only took about 5mins to put together. I bought some metallic silver spray paint and sprayed all the pieces then put it back together but the walker was flimsy and wasn’t very sturdy for my daughter to push and I figured on halloween it would be a disaster! I had to think of a way to make it stay together better. So I put the walker aside, while I thought about how to make it more sturdy I worked on the outfit.

I bought an Elsa wig and gray hair dye from WalMart. For about a month I had my daughter try the wig on and wear it around the house so she would  be used to wearing it on Halloween. Even though the walker wasn’t quite ready I would have her practice pushing that around also. I wanted her to be used to all the parts of this costume so she would wear it.

One night I was sitting at home talking to a friend about the costume and I came up with the great idea to dress up also! As her care giver, I thought this will be the perfect way to make the outfit even better. I had seen staples of all places, was selling scrubs for $4 for the top and $4 for pants, when I went to buy it they had one shirt and one pair of pants left that happened to be my size so it worked out great. I made myself a name tag that said “Sunnyside retirement” and drew a face and wrote “mommy” under the picture. I had bought one outfit from a thrift store for my daughter but I wasn’t pleased with it.

I sprayed the wig gray, and took a necklace that was like Mardi Gras beads soaked it in nail polish remover to get the purple color off then I painted it white to look like pearls. I bought a pair of non prescription glasses from a thrift store and a glasses necklace that keeps them on your neck from the $ store. All these items she also would wear around the house to get used to.

Finally I had decided gorilla glue would be the best way to keep her walker together. I took it apart and glued all the pieces together making sure they lined up so it was straight. Then for the wheels, I had been thinking about the best way to make them stay since I had bought them. I wrapped duct taped around the dowels to the same thickness as the pipe then put gorilla glue on the tape and that held them ok but still wasn’t good enough. I got a mac n cheese box and cut 4 circles the size of the wheels and glued it to the wheel and then to the pipe. Thats what it needed to make them stay on. Finally the walker was complete!

Four days before Halloween I still hadn’t found the right outfit the one I had would do but wasn’t the look I was going for. We had gone out of town for a few days and stopped at a thrift store and found the perfect shirt and skirt! She already had a pair of shoes that would match the outfit. I went to WalMart a few days later to buy some knee high leggings to complete the old lady look.

The last and final touch I did was roll up two clean diapers and stick them under her onesie to look like saggy old lady boobs. As soon as we stepped out of the car we walked about 5 feet and already had two groups of people come up to us saying “oh my gosh! How cute!” “you have to come see this” ” that is the best idea ever!” My friend had looked at me and said “next time you decide to do an amazing outfit you need to let me know so I can also.” Her son was in a minion bought costume, cute but not as cute as a little old lady.

While we were trick or treating I was very impressed that she had kept the glasses and wig on the whole time and pushed her walker herself 90% of the time, especially since she refused to take a nap that day. We had several people who I didnt know ask if they could take pictures of her and at almost every stop she got complemented on how cute she was, how they loved the costume and that was best costume they had seen. The only thing that would have made this costume better is if it wasn’t pouring down rain and we could have showed it off more. 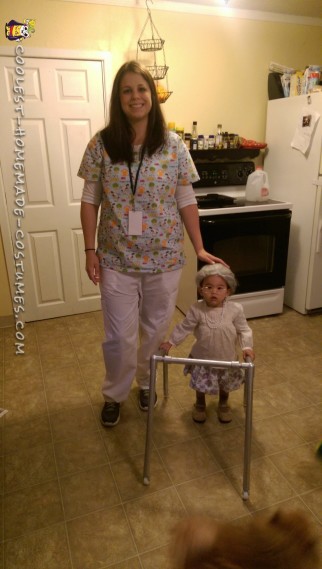 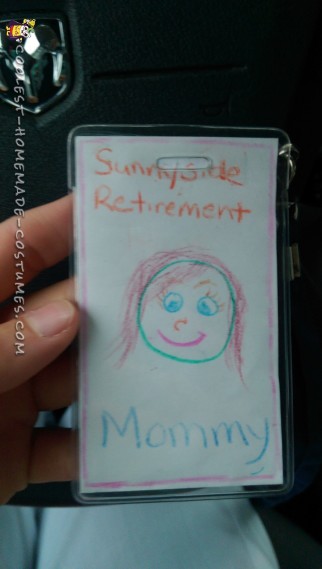 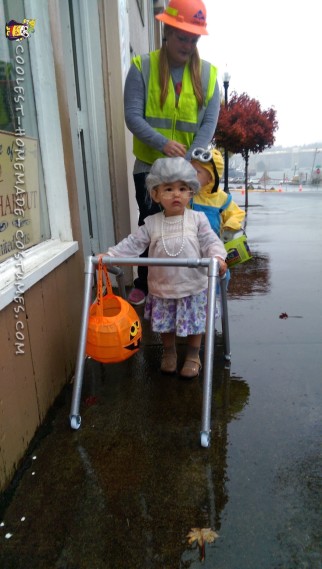 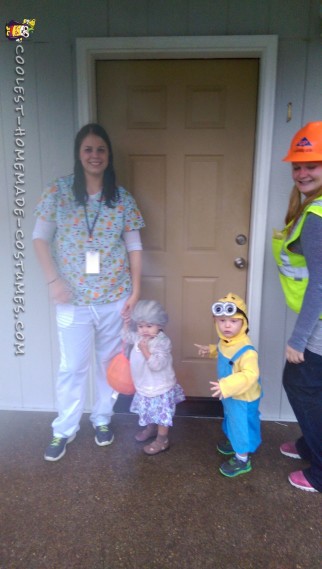 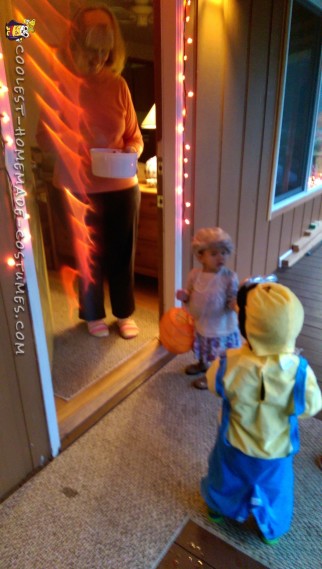 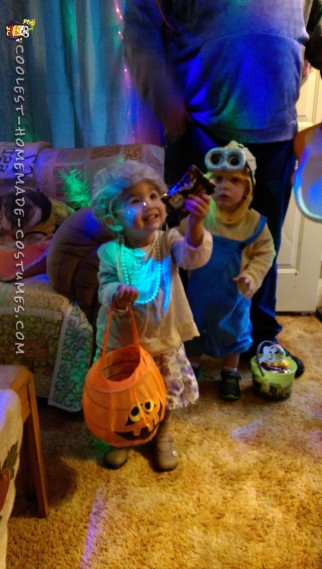 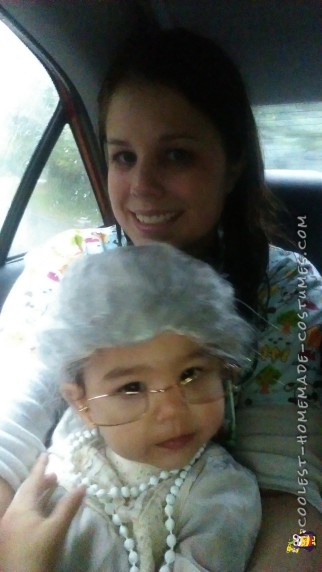 Madea Goes Trick or Treating in a Cool Grandma Costume