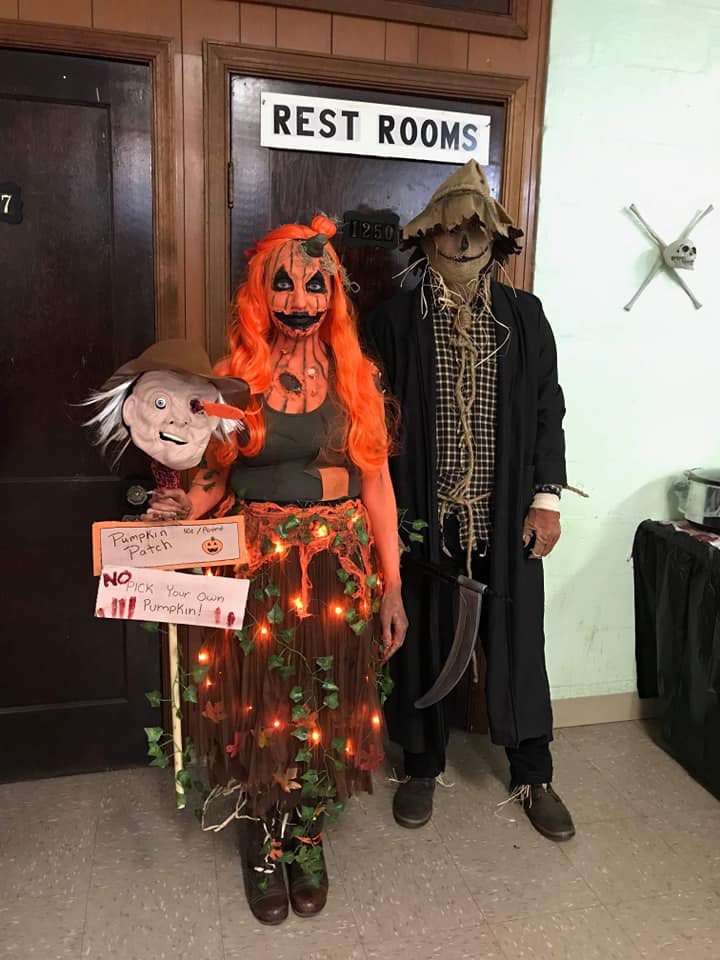 Carving pumpkins are my favorite part of Halloween so I decided why not be one for Halloween. I started out by making my skirt just using some brown tulle and then cutting the edges up to make it very jagged, I also bought a cheap pumpkin prop from dollar tree and tore the orange netting off and attached it around the waist of the skirt.

I then sewed fake leaves and orange string lights from dollar tree under the first layer of tulle. Next, I sewed vines I ordered from Amazon around the skirt.  The shirt is just a green bodysuit from amazon but I did sew orange and brown patches on it.

Next, I used instamorph moldable plastic to make my stem, fingernails and maggots to put in my rotting spots. I molded and twisted the fingernails to make them have the appearance of tree branches. I then painted them both using a non toxic paint. I took a old pair of brown compact boots and threaded some vines and raffia around them.

My last prop I made was my farmers head on a stake. I found an old ghost mask a cowboy hat and a cheap child’s wig in goodwill. I painted the mask flesh toned, stuffed a beanie and wrapped the mask around that. I then glued a fake eye in one socket and used a hot glue gun to create the look of the missing eye in the other and stuck a pumpkin carving knife in the missing eye socket. I used an old cowboy hat and the hair off an old wig to compete my farmer.

The day of my party I started off by using latex to make the rotting spots and also apply the maggots. I also used the latex and made holes in my arms to stick random pieces of vines in to make it appear they were growing out of me. I then used the latex to form the pumpkin carvings around my face and to attach my stem. Next I used body paint and painted my whole body orange. For my rotting spots I painted the inside black and brown and used KY Jelly to give it a gooey rotting appearance. Lastly I glued some moss around my horn and added an orange wig with some moss attached.