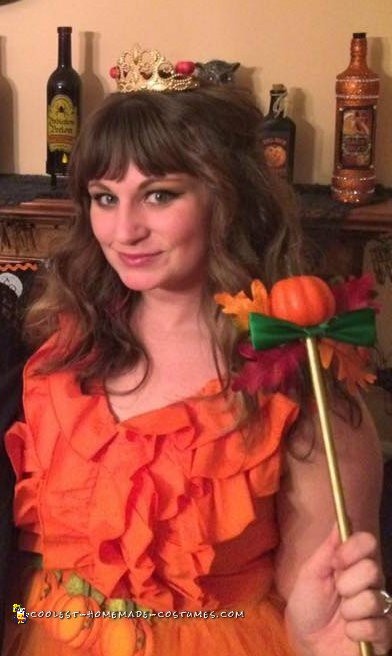 This costume started as a joke between me and some friends because they claim I am the basic white girl poster child. I love all things fall, but really and truly love all things pumpkin spice. I am constantly eating/trying/baking new pumpkin spice things. I wanted to run with the idea for a costume, but didn’t want to settle for the more common Pumpkin Spice Latte/Frappuccino costume or the classic Jack-o-lantern. I thought long and hard for something more original, and the concept for Pumpkin Spice Princess came to me. The costume itself was easy.

The base of the costume was a bridesmaid’s dress (who says you will never wear it again?) that I already had on hand, obviously. I then took 10 yards of tulle and some green satin ribbon and created a basic no sew tulle skirt. I wanted it to be very obnoxious and a round like a pumpkin, so I opted to use a lot of tulle and push it as tight as I could along the ribbon. I hot glued some felt pumpkins I found at Hobby Lobby to the very front to add some detail.

The tiara was a girl’s dress up accessory from Walmart that I spraypainted gold. I had to clip the mini pumpkins for the crown from mini garlands I found at Hobby Lobby and just hot glued them on. The wand is a wooden craft dowel also spray painted gold, topped with a vase filler sized pumpkin, a green ribbon bow (same as used from skirt), and some last minute leaf additions from the mini pumpkin garland.

The shoes are some of the Walmart brand keds ($5!) that I painted to achieve that head to toe orange look. Top with some big princess hair and lots of sparkly makeup and you’re all set!

As I said, the costume was a hit with all of my close friends and family who know me and my pumpkin spice obsession. And at the end of the night as a devoted DIYer, I had the satisfaction of knowing I came up with the costume all on my own. 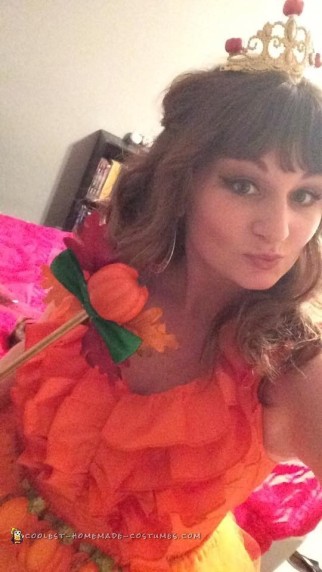 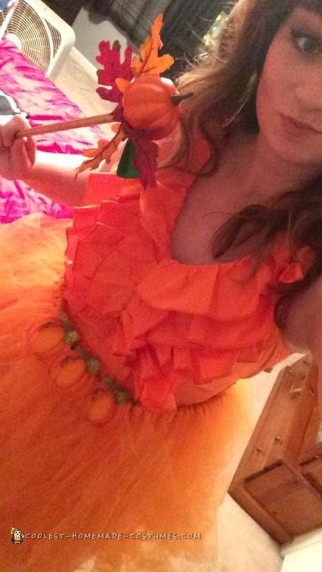