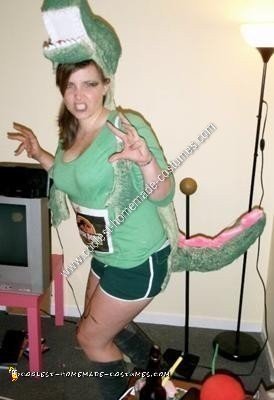 RAWR! This year I decided to be a dinosaur for Halloween so I could spend the entire night RAWRING! I didn’t buy a single thing to make this Woman’s T-Rex Dinosaur Costume but instead had it lying around the house.

Step Three: to make the tail using the same towel I glue gunned the shape of the tail together then I used a wire hanger to make it stand up straight then stuffed the tail with newspaper.

Step Four: using the towel again I made it run down my back to my bum, and glue gunned on elastic bans to go around my arms and waist.

Step Five: to make the spike I glue gunned the shape out of white fabric and stuff it with plastic bags. Then spray painted them pink.
I then painted the entire thing a darker green to make it scarier.

NOW YOU HAVE A DINOSAUR RAWR
Just for a added touch I printed off a Jurassic Park Sign and Wrote “Property of” on it.
The costume was SO MUCH FUN! and everyone loved it. It took about 6 hours to make. You need 2 full green towels and a lot of glue sticks!