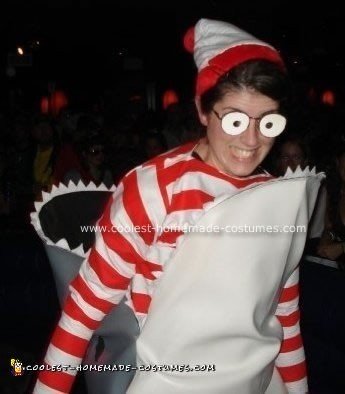 Basically it was a couple weeks before Halloween and I hadn’t figured out my costume yet but I knew it had to be completely ridiculous. I knew I wanted to be something everyone knew but I didn’t want to be boring.

I had been playing around with the idea of being someone getting eaten by a shark but it wasn’t enough. It was actually my friend Kara who pulled through with the idea of a Where’s Waldo Homemade Halloween Costume.

For glasses I used an old pair and foam core with two holes punched out for pupils. It was hard to see out of but it gave those big whites of the eyes that cartoons are known for.

Making the shark costume was the hardest because I used vinyl which was thick and hard to sew. I used cardboard and foam to maintain fin shape and I had shoulder straps made of felt that went under my shirt to hold the whole thing up. It turned out really heavy though with all the vinyl and cardboard.