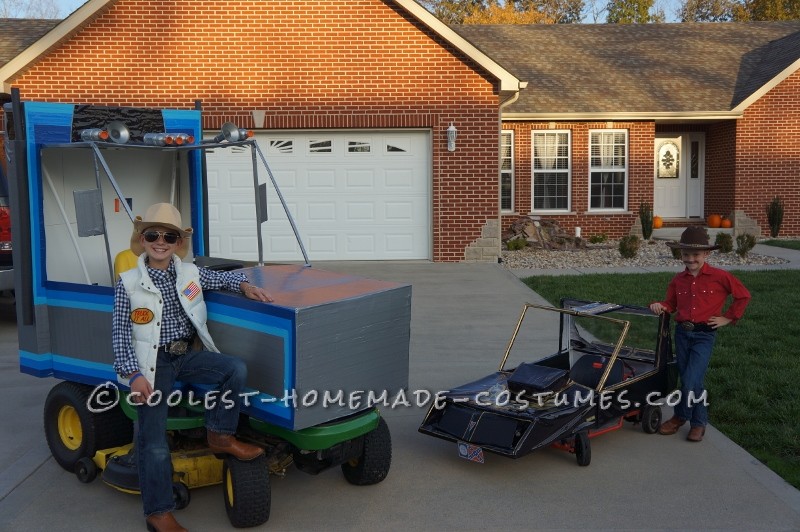 So what do you do when your sons come to you in May and say “Mom we just thought of what we want to be for Halloween!  The Snowman and Bandit!  We can use our go kart and the lawn mower to make their truck and car.  Can we go to the store now and get the supplies?”  Huh!?  It’s May, nowhere near October yet.  And I love the WE part too, meaning you mom need to get to work.  Well, okay let’s start with the easiest part, finding the costume pieces for the characters themselves.

My youngest son wants to be Bandit from Smokey and the Bandit, the original movie.  I hunted the local Goodwill stores.  Over the course of the next couple months, I found a red western style shirt, a pair of cowboy boots and a cowboy belt buckle.  His hat I ordered online just for my own piece of mind of something clean on his head.  His mustache I figured I would just draw on with a brown eyeliner pencil.

My oldest son preferred to be the Snowman from Smokey and the Bandit II.  Same thing with his costume, I found his boots at Goodwill.  I struck out on all the other pieces and had to hunt elsewhere.  I got lucky and found a replica shirt at Target, and on clearance too!  His vest, his belt buckle, and his hat were found on eBay (because you can find anything there).  And finally his sunglasses were bought at a local store.  They both wore their own blue jeans for the costumes.  Ahh, so their costumes are done, now I can rest a bit.

Fast forward now to October.  At the beginning of the month I knew it was game time.  I had to get my mind in the game and get to building.  Hmm where to start?  I printed a couple pictures of each vehicle out to study.  What could I use to build these things to be stable and light weight while they are driving, yet customizable?  I hit the hardware store and wandered around.  I found corner guard.  It was very lightweight and seemed easy to manipulate.  I think I bought over 40 of these to build 2 vehicles with.  I also needed some little screws to hold the frames I was building out of corner guard together.  A friendly worker asked me if I needed help.  I explained to him what I needed for my costume.  He got all excited and asked all kinds of questions about the costumes, and told me all about his best homemade costume he made.  I love meeting fellow Halloween creationists!!

I started my first weekend with constructing the frames with the corner guard.  I first drew up a rough draft of the frames and then started cutting the pieces to size.  I measured each vehicle, wrote down their lengths, widths, heights, and made the frames as best to size as I could using these numbers.  My husband, as kind as he is, did use the drill to screw in the little sheet metal screws into each corner where multiple pieces met up.  This was the best way to secure the plastic together.  After spending my entire weekend in the garage with all my neighbors curiously staring at me as they drove by, and I mean ENTIRE weekend, I had the frames done. 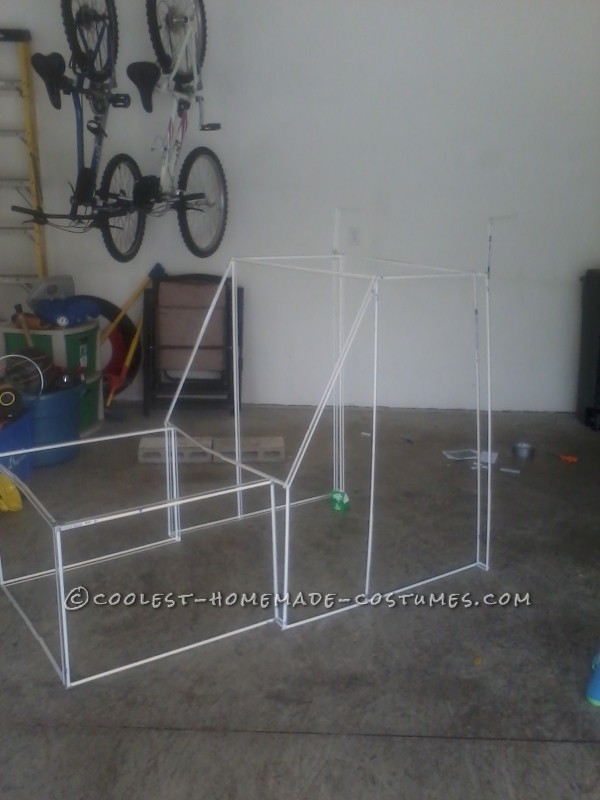 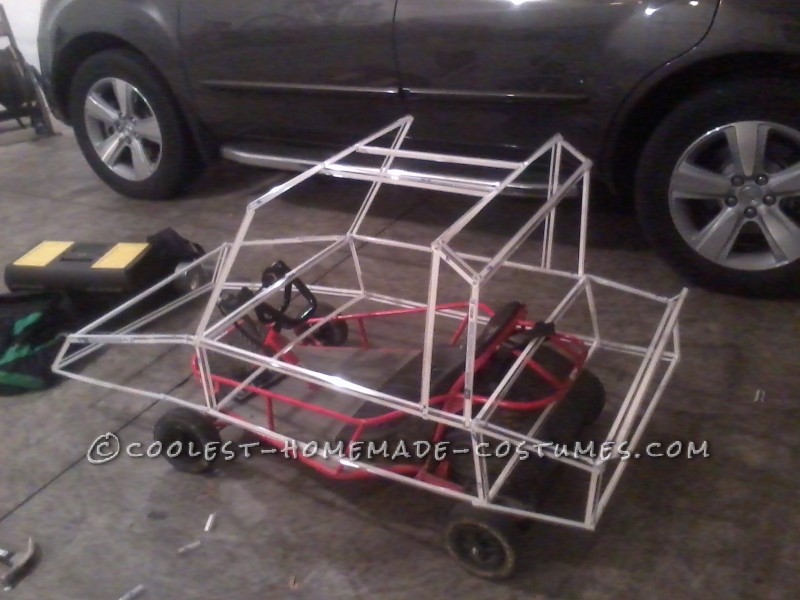 Now it’s time for covering the frames.  I had some leftover black vinyl so I thought this would be a good cover for the Trans Am.  I still was not sure what to do for the semi truck.  I used my hot glue gun  to attach the black vinyl to the frame.  I would use whatever time I could find during the week while the kids were at school to make progress.  I would drop them off, work in the garage on the costumes,  pick them up, work in the garage.  3 burn blisters and a sore back later I had the Trans Am almost covered by Wednesday.  I finished up the front end with black foam board attached with clack duct tape.  I hot glued some clear vinyl for the back window.  I also used some bike lights to add headlights to the Trans Am.

Now, it was ready to be detailed.  Using gold duct tape, I pin striped the Trans Am.  I had to make a lot of strips for this by tearing the duct tape.  Final touches…Of course the Trans Am would not be Bandit’s Trans Am without the screaming chicken, the Firebird.  I printed it out on 2 pieces of legal sized paper, half a bird on each paper.  I matched them up, cut it out, and glued clear vinyl on top to protect the inks.  I used the same Scotch spray glue to attach the bird to the hood of the car.  I used this same technique for the little Firebird emblems, Pontiac and Trans Am Logos.  For the Georgia license plates, I printed them and laminated them before gluing them onto the car.  With a few wire ties, the completed frame was attached onto the go kart and ready.  Whew!  All that took me through to the end of the weekend.  No rest for the weary!  Halloween is getting closer! 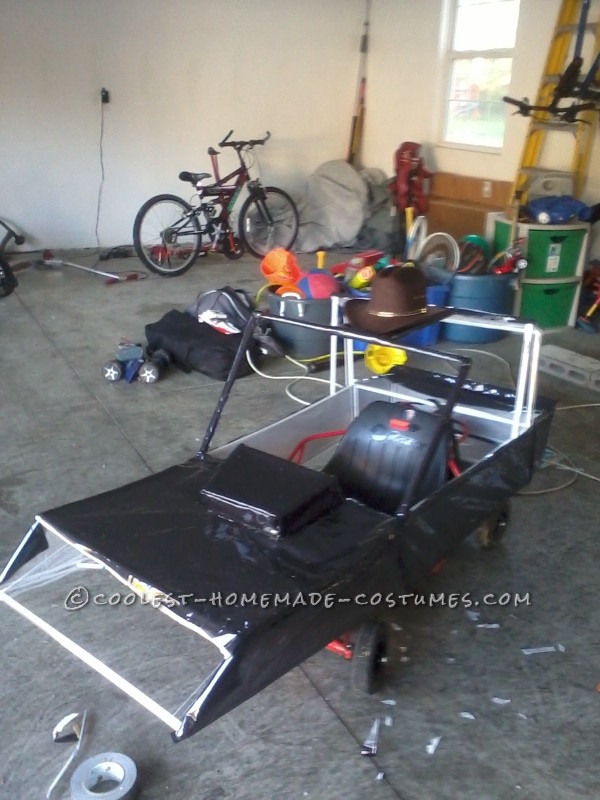 Vinyl added to the frame 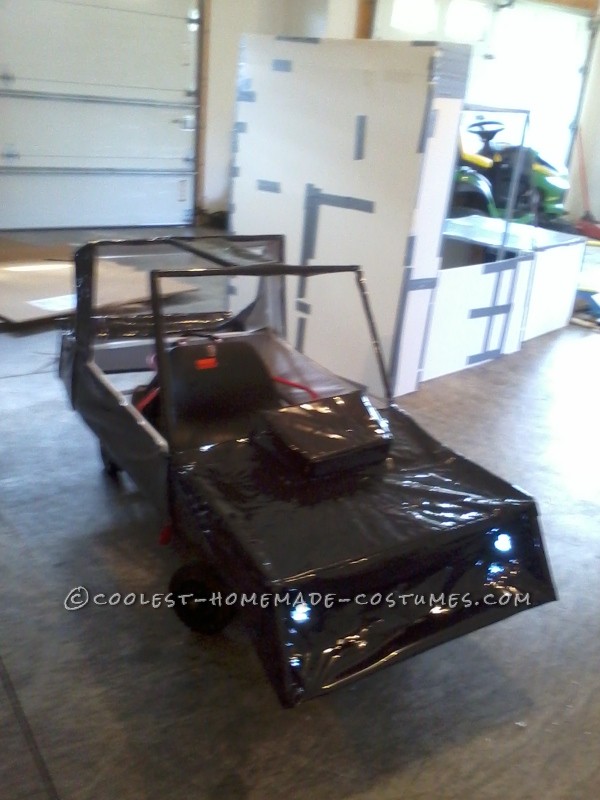 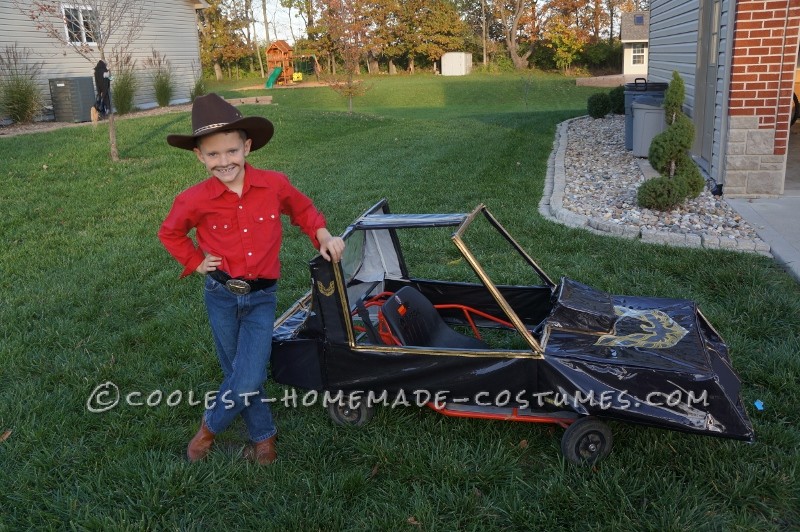 Bandit and his Trans Am

Time for the Snowman to get his ride

Snowman’s semi, it’s your turn.  My first thought was to use the clear vinyl for his semi truck as well, and spray paint it at the end silver.  But I feared it would not be sturdy enough, and my blistered fingers cried out for another idea.  What to do, what to do??  I spied the foam board, that is light, and easy to cut.  Let’s try it, and hope for the best!  I didn’t have enough on hand the first day, so I improvised with some other cardboard I found laying around.  I used regular old duct tape to hold the sections to the frame and to each other.  After getting some more foam board, I finished all of the frame but the doors, during the next 2 days.  Of course I had a request for functional doors that could latch.  I cut both of the doors from the foam board, and used ribbon with a piece of Velcro sewn onto it as the door latch.  I had the other piece of Velcro stuck on the inside of the truck to latch onto.

Still not sure what to do for the coloring of the truck, I stood back and looked at it.  I liked the silver coloring of the duct tape, and it would be water resistant in case of rain on Halloween night.  I liked that idea, so I ran with it.  I taped the entire truck in silver duct tape.  Luckily too, they make so many colors of duct tape, I used 3 different shades of blue duct tape for the Snowman’s Semi detailing.  For the black windows, I used some of the leftover scraps from the Trans Am, and glued them on using the spray glue.  For the smoke stacks, I attached winter pipe insulators onto the sides.  I had found 2 different sizes during my wandering at the hardware store.   I spied some Gatorade bottles in the recycle bin that I sprayed painted silver to use for the top lights of the truck.  I just flipped the caps upside down and glued them down.

The air horns used the recycle bin as well.  Spray painted tops of bottles attached to some spray painted leftover PVC pipe, instant air horn.  Once dried these were all glued to the top of the truck.  For the headlights, I cut flaps into the front of the truck and secured them at an angle, so t hat the lights of the tractor reflected off the silver duct tape to give us headlights.

Now for getting this thing to stay on the lawn tractor wasn’t as easy.  I had found some PVC pipes at the hardware store and thought these should work to hold it up off the wheels and hood.  With my husband’s help, we put a dowel rod in bottom ends of the back supports.  The lawn tractor conveniently had two holes on the back that they fit it in.  My husband cut two smaller length poles for the front supports.  Same convenient holes there to use.  It’s like they knew people would be building Halloween costumes around it!  Great design lawn tractor company!  On 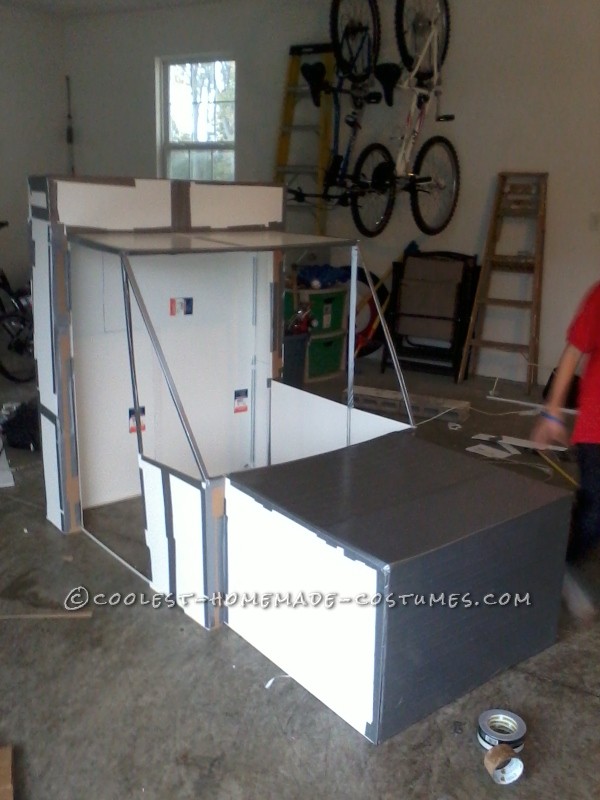 Foam board added to the frame 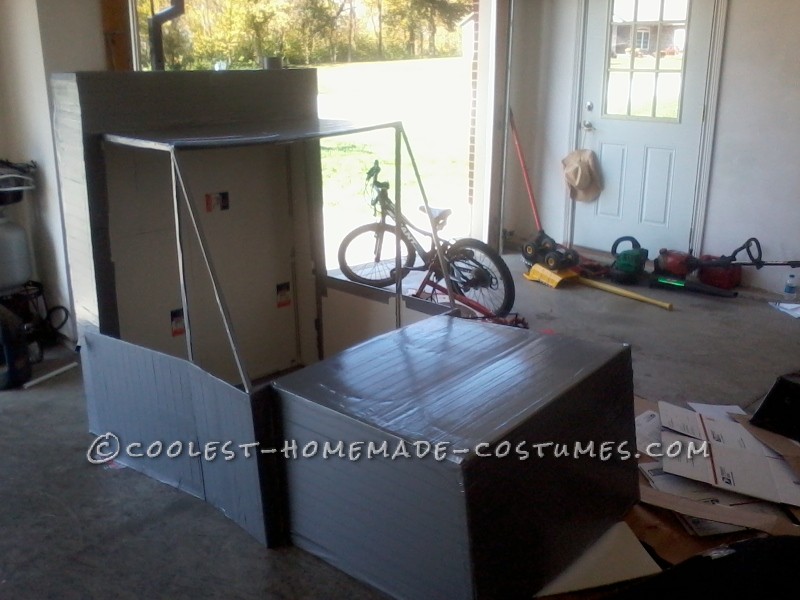 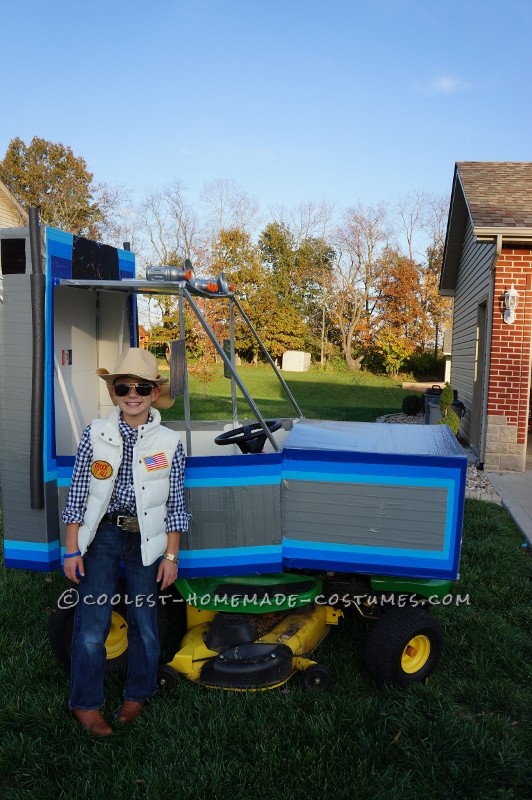 Snowman and his Semi Truck

Now for the Big Night

All in all, with the building, testing, and fine-tuning, I would say the vehicle build took me about 3 weeks.  I would show up to school pick up with pieces of duct tape on me, dirty knees, blistered fingers, and weary muscles.  I never had any problems falling asleep at night though!

Halloween night, time for the reveal.  Bandit and the Snowman couldn’t wait for dark.  They were so excited to drive for their candy.  It was awesome!  So many people were stopping and checking out their costume.  People came outside their houses just to see their rides.  “I left the other half of my costume on the street,” said the Snowman.  He was cracking me up.  One Mom I passed on the street goes, “All I got is a wagon.  I feel embarrassed.”  Other passer by’s would recite lines from the movie.  It was worth all the work!  Now for some rest before next Halloween….

The Snowman and the Bandit 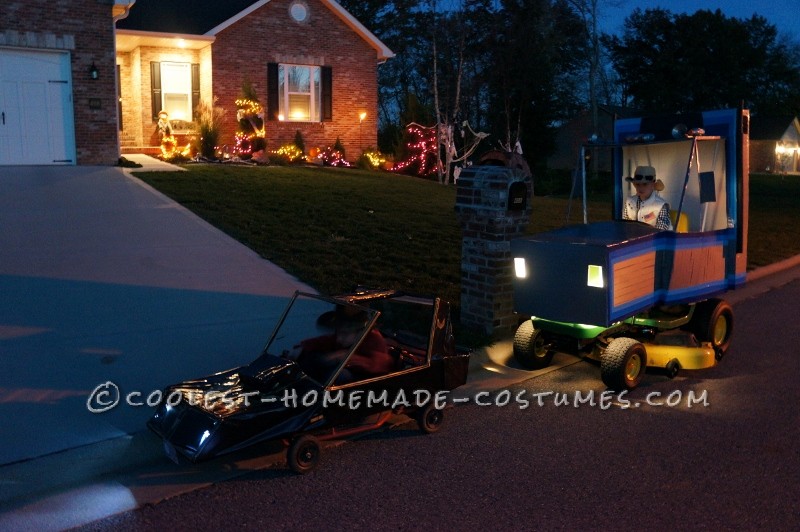 Snowman and Bandit getting their load