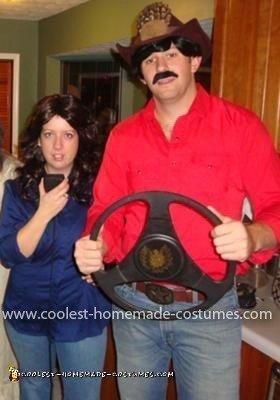 One of the best 70’s movies of all time (in my opinion) is Smokey and the Bandit. From the 77’ Trans Am to the eighteen wheeler carrying a truck load of bootleg Coors beer, throw in some CB lingo and this movie is a southern classic. The Homemade Smokey and the Bandit Couple Costume was pretty easy to put together and wear all night. Bo “Bandit” Darville (Burt Reynolds) was the red western shirt; some boot cut jeans, a wig, mustache, and cowboy hat. Carrie was the women running from a wedding the Bandit just happened to pick up. Carrie is at first wearing a wedding dress and changes in to some bell bottom jeans, a blue blouse and some platform sandals.

I found a vintage 70’s red western shirt at a local thrift store which was the hardest part of the costume. The hat and wig came from the costume party store. The wig is called 70’s men’s short hair wig. The mustache I made out of some fur that I cut to the shape of his and used double sided tape and spirit gum to wear it all night. I added the feathers and a piece of leather to the hat. I wore a turquoise bracelet, belt buckle, and boots.

My girlfriend was Carrie (Sally Fields). She bought the wide flare jeans from Old Navy. The blue blouse was her mom’s. The feathered hair wig was from a local party store.

I needed something to signify the Trans Am. I had bought a steering wheel cover and used the plastic holder and painted a gold phoenix on it. I made the CB mic out of cardboard and string and painted it black. 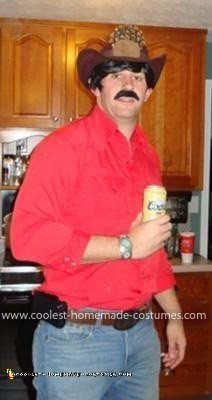