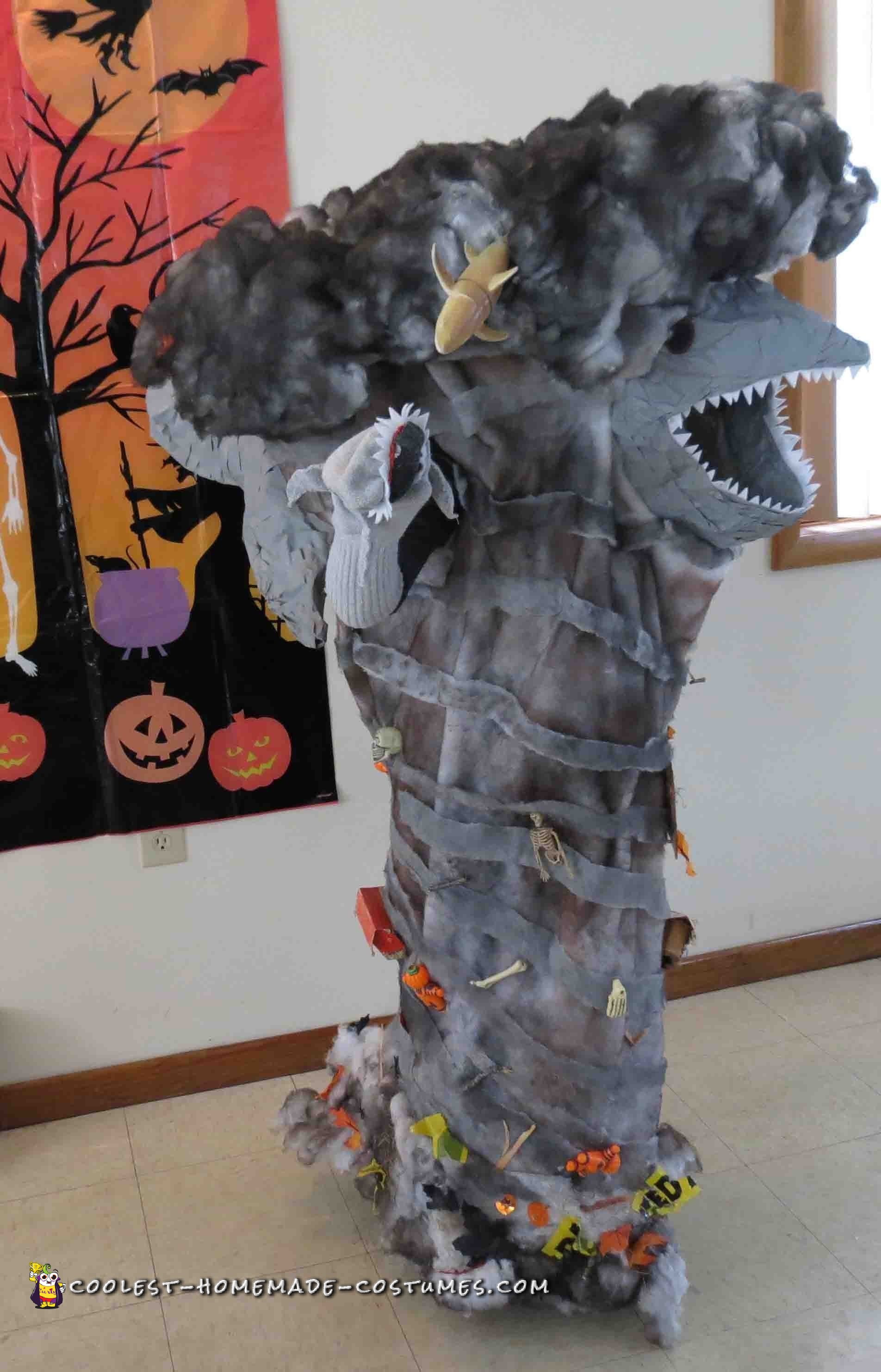 My daughter, granddaughter Lilly age 9 and I were brainstorming on what to make for Lilly’s costume. Halloween being her favorite holiday she helps come up with an idea that makes her stand out. During this past summer, we all attended a back yard neighborhood party where we all watched the third movie in the Sharknado series, “Sharknado, Oh Hell No” on an outdoor big screen.  When trying to come up with an idea for Halloween, my granddaughter remembered that and wanted to be a tornado and so we came up with the idea of using the Sharknado theme.

We started with a hula-hoop for the top, then attached that to chicken wire to mold the upper part of the costume and had it go down just above the waist. We attached the chicken wire to a life jacket to make it easy to hold it into place while wearing the costume. We used dowel rods attached with duct tape in a few places attaching them to the life jacket near the bottom strap and up past the wire to the hula-hoop. This helps to hold the shape up and out near the top. We wanted it to go up over her head so in order to have a way for her to see we incorporated the shark going through the tornado so she could have her vision through the sharks mouth.

The shark was made by shaping chicken wire and covering it in masking tape and then spray painting it gray. We had the face of the shark in the front and its tail out the back of the tornado. We cut felt like teeth and spay used hot glue gun to hold that in place around the mouth. We used safety pins to attach a piece of black stocking inside the sharks mouth to the chicken wire. This made it so she could see through it but blocked the view of her face and gave a better look for the shark. Using batting material that we spray painted with brown, gray and black spray paint to give the appearance of a dirty spinning tornado, we wrapped it around the hula-hoop. Bunching it tighter towards the bottom but leaving enough room to walk easily. We used the spray glue to hold it all together. The spray glue worked great for this.

We then took long thin strips of the sprayed gray batting that we took those pieces and separated the material in half to “thin” the material to make thin swirls around it to give it the illusion of the spinning tornado. We sprayed glued those on. We used cotton stuffing from an old pillow and pulled it apart and fluffed it out. We spray painted what we were using on the top to make the black cloud appearance with black spray paint.

We used an old straw hat and sprayed with spray glue and attached some of the black cotton to the hat and around the top edges of the hula-hoop. We also used the wire to tie a toy shark we had to the top of the tornado as to be flying out of it. At the bottom edges we attached more cotton that was spray painted brown and a bit black and used spray glue to attach it easily to the bottom edge so that it would look like the debris field blowing up dust and debris like a real tornado.

Using popsicle sticks we made a sign by gluing them together and painting it brown, printing out a “Welcome to HalloweenTown, population 11,593”  and mod podged  it to the sticks creating the HalloweenTown sign that was sucked up into the tornado. We used tie wire to attach it to the front of the costume through the batting to the chicken wire. We attached with either spray glue or hot glue other items such as hand made scare crow from popsicle sticks, we made houses from old shirt boxes being sucked into the tornado, skeletons, pumpkins and debris that would have the appearance of wiping out a HalloweenTown using tie wire or spray glue to hold them on. Also used some cut up artificial leaves and Spanish moss, broken up tree sticks from outside, some broken up popsicle sticks and broken Halloween decorations to give the appearance of the debris field that tornado was picking up from the ground.

Taking some old gray socks, we made hand puppets to look like sharks cutting out teeth from felt that we sewed on and black piece of a sock for the mouth and eyes. She wore them on her arms to give illusion of sharks flying out of the tornado as she moved her arms around from the sides. We also took 2 strings of battery operated tiny flashing white lights and bunched one string up with a small part of the string stretched out near the top cloud. We wrapped some extra batting around it to hid the light bulbs and pinned and spray glued it to the inside of costume near the top, only letting the flashing light shine through, and attached the same way, one between midway and bottom of the costume also to the inside of the batting. This created the illusion of lightening going on inside the tornado which makes an awesome effect in the dark and easier to see the costume while trick or treating.

The battery pack for the lights was attached with tie wire to the chicken wire. The entire costume then just pulled over her head, as she puts her arms through the life jacket and out the arm holes of the tornado. We buckled the life jacket by reaching in over the top as she leaned forward to hold everything in place, and put the hat with the cotton cloud glued on top of it on her head to make the entire dark cloud with the tornado drooping down to the ground sucking up HalloweenTown.

She would walk around then turn around in circles sometimes moving her arms in and out making it look like a spinning tornado and the sharks on her arms looked like they were flying out of it.  She had a blast and everyone loved it.

We had a ton of comments such as, Lilly’s costume is the best ever once again, how do you come up with these awesome costumes, that is so creative, I love it, wow, awesome, great costume, you guys amaze me, she can move around so easily in that, how cool is that! We even had one comment that we, “should be in costume design for the movies!” She even received  extra handfuls of candy while trick or treating in our neighborhood from people saying she was the best costume they have seen and would grab another handful of candy to throw in her bag. Not to mention the comments or non comments of people just standing there with a smile on their face and saying wow just wow. Totally cool. Simply the most awesome costume. It was my favorite!

This was a fun project. It didn’t take more than a couple days to complete. It was not expensive at all to make. Most of the items were things we had around the house and really just had to purchase the batting, spray paint, spray glue and the lights.

The idea of a DIY costume to me is to make something creative without a lot of expense into it. We love working on coming up with ways to keep it light weight and easy to get on and off and move around in as well as making it stand out and exciting fun for my 9 year old granddaughter as Halloween is her favorite holiday. The way our neighborhood, friends and family react makes it so much fun for all of us. We can’t wait till next year to try a new DIY Halloween costume project. 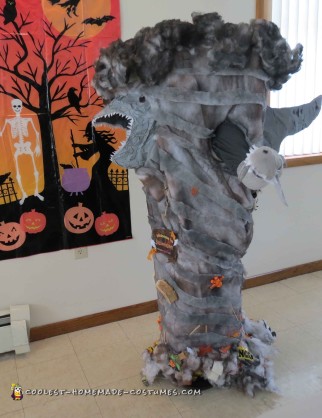 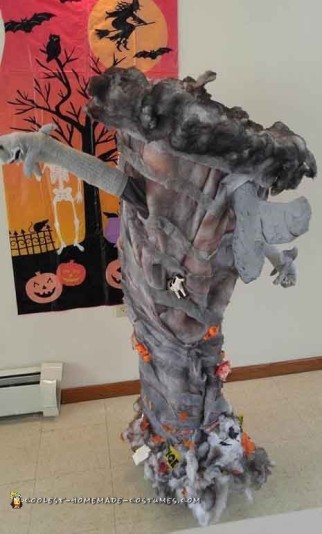 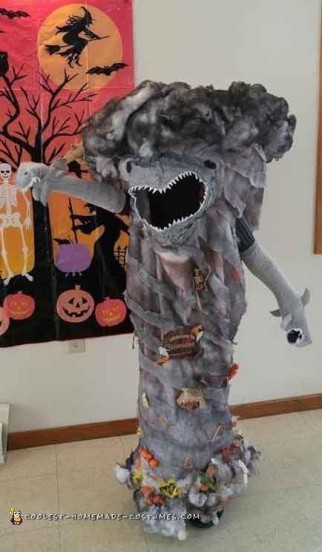 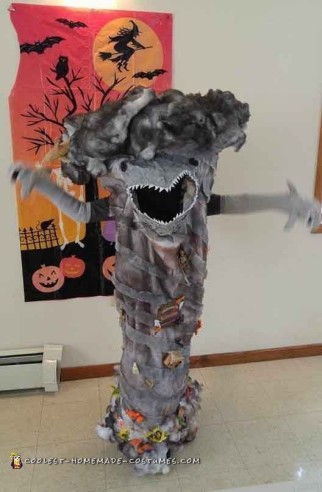 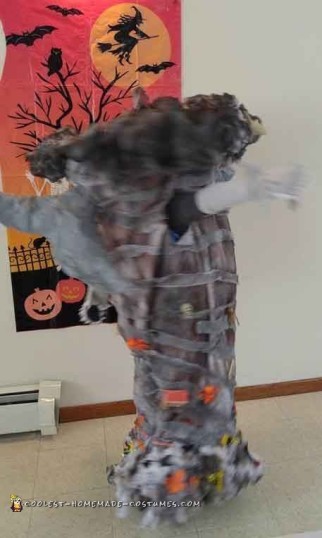 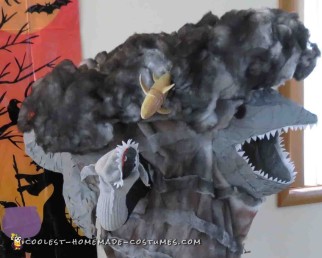 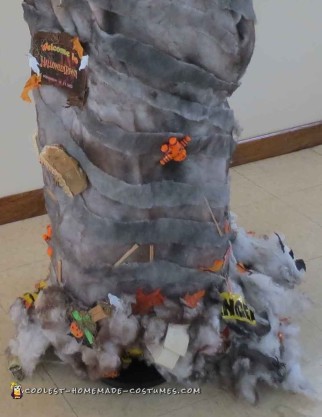 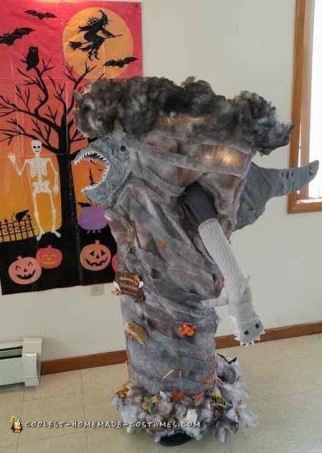