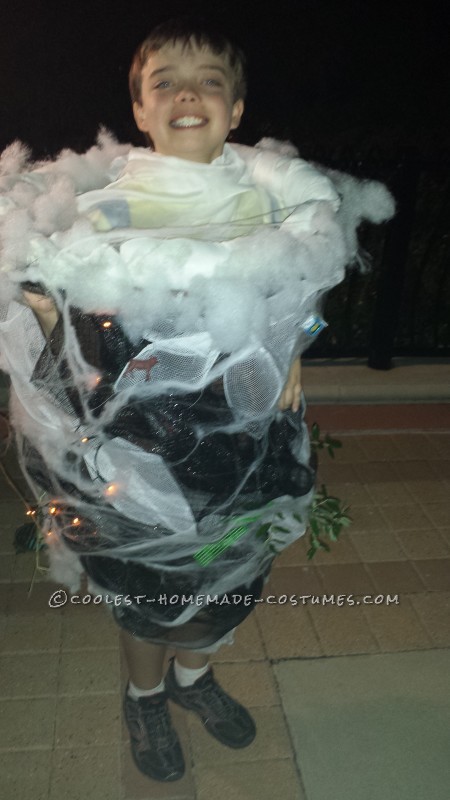 My son loves weather (we even went to the National Weather Service for his birthday this year) so when it came to Halloween, he decided he wanted to be a tornado this year.

I took a hula hoop and used that as the base. I took a piece of brown fabric and sewed it to the hula hoop and then at the bottom ran a hem and put elastic in it so that I could draw it up and make it come to a point like a tornado.

After that, I put black mesh on the outside of the fabric all the way around and on top of that made strands of black and white mesh to place around the tornado to make it look like it was spinning (also gives me a place to put stuff later on).

I then put stretchy white spider webs on the outside to make it look like wind and that the tornado was moving.

To finish it off, we put leaves, twigs, toys including two cows, a shark, some fence pieces and hay in the tornado. On top, it was covered with polyfill to look like clouds. My husband made a harness of material and PVC pipe to hold the tornado up so our son didn’t have to support it. He loved it! He even had a battery powered light stand for lightening.

He entered in our local contest for our town and he won first place for his age group out of about 25 kids.  He had such a blast going through the crowd and hearing everyone saying “Here comes the tornado.” When they announced that he won his age group (7-9) he was ecstatic! They said “and now for first place, blowing through your town, its the tornado” and he spun when he went up to get his prize.

He had such a great time in this costume and I got to make a memorable time for him that he won’t forget. 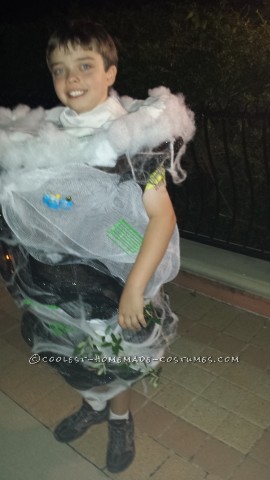