Growing up, my mom never bought us any costumes; she always made them herself, and they were always amazing. So now that I am not under my mother’s wings anymore, I am left to continue the tradition and make my own costumes. With that preface, I decided to go in a Teen Wolf DIY Halloween Costume this Halloween season.

I decided early on that if I was going to create a transformed Scott Howard that I wanted it to be as close to the real thing as possible. With this idea in mind, I started out the whole process by watching the movie two times so I could freshen up on what the costume should look like and get into the character. After I knew what I needed to do, I headed out to buy the many parts that I needed. This list ended up entailing the following: brunette mullet wig, another long haired brunette wig, fangs, women’s, fingernails, plain white tank top, yellow cheer leading shorts, long plain white socks, plain white shoes, white head band, blue and yellow fabric paint, 6 bottles of spirit gum glue, denture adhesive, basketball and bronzer.

So needless to say, it was not cheap or easy to put together. I ended spending around 150 dollars all told, and I had to run around to numerous stores for a few hours (but trust me, it ended up being worth it in the end). Next, about a week before Halloween, I put the movie on again and began painting the tank top, shorts, head band, shoes and socks with the fabric paint to get them to look exactly like Teen Wolf in the movie. This ended up taking about five hours, and then I had to let them all dry.

The next day, I took the mullet wig I purchased and cut the back and sides to get the length correct, and then stapled the pieces I cut off to the front so that the hair there would be longer as well. This part of the process took about an hour to get right. The rest of the process of getting ready to be Teen Wolf took place from five o’clock to nine o’clock on Friday night after work.

The first thing I did was to print a picture out of the actual Teen Wolf’s face and tape it to the bathroom mirror so that I could get my face to look as close to his as possible. Then, I got out my clippers and shaved the parts of my arms and legs where I intended to glue hair so that the glue and hair would be less painful remove later. Next, I took the extra wig I had purchased and cut it up into longer pieces for my face and shorter pieces for the rest of my body. Before beginning the long process of gluing the hair on, I put on the uniform as well so that I would know where I needed to glue the hair.

All told, this process took nearly four hours and was extremely arduous, but it really made the costume for me and all the people that appreciated it later. After the hair was done though, I put on the last few finishing touches. I put on my already prepared wig and headband, dentured in my fangs, put on some bronzer to darken my face, and lastly applied the nails. This part of the ordeal didn’t take too long, but it really added to the authenticity of the costume. Basically, the entire process took a good chunk of change, a lot of devotion, time and patience, but in the end, I had as close to a replica of Teen Wolf as I felt was possible. It really paid off later too with the amount of attention that was given to the Teen Wolf DIY Halloween Costume when we went out.

Getting to the party we had to walk about two blocks and just about everyone was yelling, taking pictures or pointing. Then needless to say at the establishment that we hung out at, I basically acquired a large loyal following that talked to me, took pictures and watched me do the Teen Wolf dance throughout the night. It was an awesome time, and I would say I ended up getting my picture taken with at least 75 people. In the end, all the effort that went into this costume was totally worth it, and to top it all off, I went through the process of gluing the hair on again the following day for another Halloween bash!

I hope this helps anyone that wants a truly authentic Teen Wolf version of Scott Howard, and I would be happy to help if anyone has further questions. 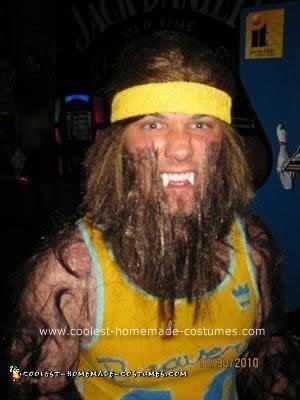 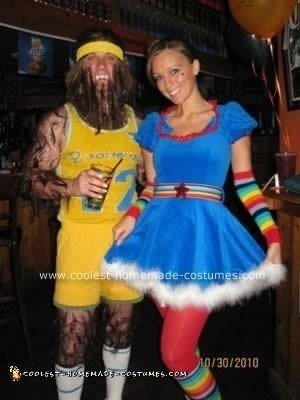