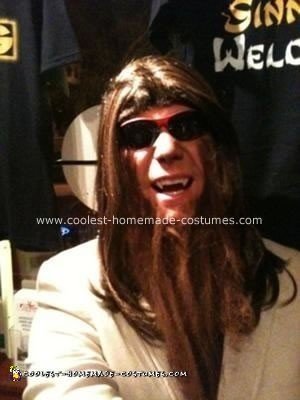 I wore this teen wolf homemade costume to an 80’s party put on for a local charity. It was a major hit with all the party goers and even won the costume contest.

I had ordered a teen wolf jersey and planned on doing it that way, but it didn’t show up on time… so I decided to go with the dance attire for teen wolf. I used the thrift mart to find an off white suit which I wore with a black t-shirt underneath.

A local costume shop had a “werewolf” kit which had make up supplies, hair, and spirit gum, as well as a guide to making the face. I used the guide sparingly, although it was very helpful, and used a picture of TW from the movie.

I first applied a light light browning make up to my face, a darker brown on my nose and black on the bottom of my nose and around my eyes. Then I started applying the hair, sticking hair with spirit gum to the neck. I started on the left jaw moving down under the jaw line and chin as I would next be putting it on the upper jaw and chin. Moving on to the chin and cheeks I stuck hair along my chin/jaw and my upper cheeks.

Next I took the wig and cut off the bangs, which I had planned on using for wrist hair and eventually ran out of time for. For future reference I definitely had the wig too long, and I will address this next time I use this teen wolf homemade costume.

I topped it all off with a pair of funny looking sporty shades. Oh! I almost forgot the fangs! I bought a pair of realistic looking fangs that you mold to your teeth. The process took about 15 minutes total and was totally worth it as it looked super sweet.

All in all I spent about $100 bucks on the costume, and I would estimate probably another $50 had I gone with the basketball player uniform. All supplies I bought at a costume shop and thrift store for clothes.