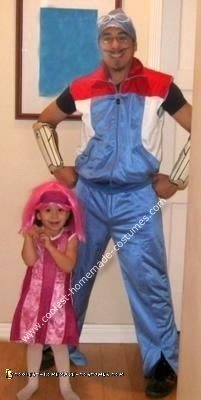 When my daughter was three, she became enthralled with a kids show called Lazytown. The two heroes of the series are Stephanie and Sportacus, and they spend their days trying to motivate the residents of said lazy town to be active, while trying to thwart the lethargy-inducing schemes of Roddy the Rotten. (If you haven’t seen the show, you might as well move along – this will do nothing for you.)

Anyway, my daughter wanted to be Stephanie for Halloween, and she loves my imitation of Sportacus and his ambiguous European accent, so I had no choice as to what I was going to dress up as.

She found a Stephanie costume at Target, but they don’t really make costumes for Sportacus (Because it’s a kids show, and no adult in their right mind dresses up like a supporting-role adult character from an obscure kids show. Right?:-)

So I went to the thrift store and happened upon this groovy workout suit. I cut off the arms and used one as a beanie. I modified my Adidas, painted some old sunglasses light blue, put soccer shin guards on my arms, and painted on that cartoony mustache. And just like that, we were the dynamic duo of doin’-stuff.

We had a great time playing our parts, but needless to say, hardly anyone had any idea who we were supposed to be.

I swear, it looked much better in person. Seriously.

Best Pee-Wee Herman Resemblance Ever! Not a Costume to Say!

3 thoughts on “Coolest Sportacus and Stephanie from Lazytown Costumes”